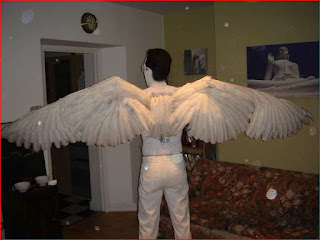 We know that the man in the image is not an angel.
What really are angels?


“The Son of Man will send His angels, and they will remove from His Kingdom everything that causes sin and all who do evil.”

The Scripture speaks about the creation of angels, therefore, it is clear that they have not existed from all eternity (Nehemiah 9:6; Psalm 148:2, 5). Colossians 1:16-17 explains:

“For by Him all things were created, both in the heavens and on earth, visible and invisible, whether thrones or dominions or rulers or authorities—all things have been created by Him and for Him. And He is before all things, and in Him all things hold together.”

The time of their creation is never definitely specified, but it is most probable that it occurred in connection with the creation of the heavens in Genesis 1:1. It may be that God created the angels immediately after He had created the heavens and before He created the earth—for according to Job 38:4-7, “the sons of God shouted for joy” when He laid the foundations of the earth.

Angels are essentially “ministering spirits,” (Hebrews 1:14) and do not have physical bodies like humans. Jesus declared that “a spirit hath not flesh and bones, as ye see me have” (Luke 24:37-39).

The Bible does, however, make it clear that angels can only be in one place at a time. They must have some localized presence.

Angels can take on the appearance of men when the occasion demands. How else could some “entertain angels unaware” (Hebrews 13:2)? On the other hand, their appearance is sometimes in dazzling white and blazing glory (Matthew 28:2-4).