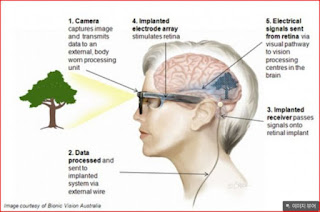 
New research into bionic vision may hold the key to restoring some sight to millions of people world-wide who are blind or have severely impaired vision. Researchers in Australia have announced a significant breakthrough in restoring some form of sight to blind patients such as spots of black and white light.


A patient in Australia who has severe vision loss due to the inherited condition retinitis pigmentosa, was fitted with an early prototype bionic eye in May this year during surgery at the Royal Victorian Eye and Ear Hospital in Melbourne. The device was designed, built and tested by a team at the Australian Bionics Institute and switched on in July when Dianne Ashworth had recovered from surgery.


The bionic eye is equipped with 24 electrodes with a small lead wire that extends from the back of the eye to a receptor attached behind her ear, not unlike a cochlea implant. Artificial retinas require surgery to implant electrodes deep into the eye, stimulating cells that transmit information to the brain.


The device restores mild vision, where patients are able to pick up major contrasts and edges such as light and dark objects, which researchers hope to develop so blind patients can achieve independent mobility. The team says two more volunteers have now undergone the four and a half hour operation and are waiting for their devices to be switched on.


Feedback from Ashworth over the next 18 months will help the team develop the next generation of devices with a wider view. According to the World Health Organization, 39 million people are blind world-wide and 246 million have low vision.

Modern technology made it possible for vision-impaired people to see again. It’s good news to those people.


When I read this news, I remembered the Word of the Lord in the Gospels telling us that God blinded disobedient people and made the blind but obedient people see.


"The Lord has blinded their eyes and hardened their hearts--so that their eyes cannot see, and their hearts cannot understand, and they cannot turn to Me and have Me heal them."


because He has anointed Me


to preach good news to the poor.


He has sent Me to proclaim freedom for the prisoners


and recovery of sight for the blind,


to release the oppressed,


to proclaim the year of the Lord’s favor.”

Lord Jesus, we once were lost and blinded but now are found and see the Light of Eternal Life in You!  Thank You for Your Grace! Amen.
Posted by 지구 여행객 JOHN KIM at 2:01 PM