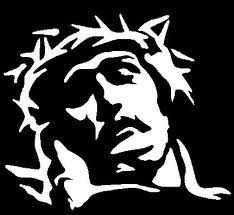 Christ wore the Crown of Thorn to give us the Crown of Life : Thorn Crown He wore on His Head means He took our Curse.


“When Jesus came out wearing the crown of thorns and the purple robe, Pilate said to them, "Here is the man!” (John 19:5)


Behind the scenes the soldiers have had their fun with the Prisoner. Having heard that he claimed to be a king, they dressed him in a purple robe, possibly a soldier's red cloak, made a crown of thorns and put it on his head, placing a reed in his hand for a sceptre. This parody continued as they bowed in mock [reverence] saying, “Hail, King of the Jews!” smiting him and spitting on him and striking him repeatedly on the head with the stiff reed that served as a sceptre (Matthew 27:28-30).


The rendering of John 19:5 in the King James Version points to that dramatic moment when Christ was brought forth for all to see: “then came Jesus forth, wearing the crown of thorns…” That sad spectacle left its mark for ever on John's mind (Frederick S. Leahy, The Cross He Bore, Banner of Truth Trust, 1996, p. 51).

Blessed is the man who perseveres under trial, because when he has stood the test, he will receive the crown of life that God has promised to those who love him. (James 1:12)


Do not be afraid of what you are about to suffer. I tell you, the devil will put some of you in prison to test you, and you will suffer persecution for ten days. Be faithful, even to the point of death, and I will give you the crown of life. (Revelation 2:10)

Here is one of the Famous Christian hymn songs;


'Twas God's own Son who came to earth,
Who chose to know a lowly birth;
But, tho' a King of matchless worth,
He wore a crown of thorns.


Wonderful, Counselor was He,
Matchless His grace; how could it be
That, at the last, He wore for me
That bitter crown of thorns?


Kind were the deeds that crowned each day,
Gracious the words His lips would say;
While He pursued the fateful way
To wear that crown of thorns.


Never again His brow shall know
Piercings of agony and woe;
But 'twas for us that, here below,
He wore the crown of thorns.

Lord Jesus, now I know why the twenty-four elders in Heaven fall down, lay their crowns before the Throne and worship You, saying;


“You are worthy, our Lord and God,


to receive glory and honor and power,


for you created all things,


and by your will they were created


and have their being.”

It’s because the Crown belongs to You only, the Eternal King in Power, Glory and Honor. Amen.
Posted by 지구 여행객 JOHN KIM at 11:33 AM