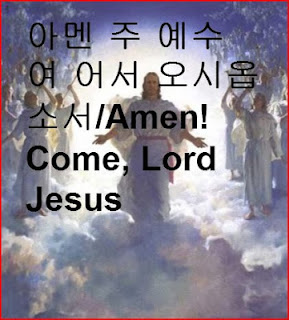 I started to post my writings on the blog since last February, 2012.
My intention was to awake myself, family and readers so we can be better prepared for the Glorious Return of Christ.
As of this writing, 330 postings were uploaded on the blog and 5,790 clicks have been made by the readers from more than 30 countries. It was a kind of miracle to me.
I asked myself.  Who am I that can write the topic articles from the Bible? Am I qualified to do this holy mission viewed from personality, spirituality and capability? My answer to this self questioning is definitely ‘No’.
Did God say to me, “Keep writing it!”? Honestly not.
Then why do I keep writing?
That’s because I believe the Lord Jesus gave the Great Commission to anybody who believes in Him.


“Then Jesus came to them and said, “All authority in heaven and on earth has been given to me. Therefore go and make disciples of all nations, baptizing them in the name of the Father and of the Son and of the Holy Spirit, and teaching them to obey everything I have commanded you. And surely I am with you always, to the very end of the age.”


How do we carry His commission? Everybody has different personality, background, experience, life situation etc. so we cannot say, ‘this is it.’ It’s up to your own decision in prayer and preparation.
The following is the example of the Apostle Paul’s mission.


“As the soldiers were about to take Paul into the barracks, he asked the commander, “May I say something to you?”


“Do you speak Greek?” he replied. “Aren’t you the Egyptian who started a revolt and led four thousand terrorists out into the desert some time ago?”


Paul answered, “I am a Jew, from Tarsus in Cilicia, a citizen of no ordinary city. Please let me speak to the people.”


Having received the commander’s permission, Paul stood on the steps and motioned to the crowd. When they were all silent, he said to them in Aramaic.”


The Greek language in Paul’s time was what was then almost universally spoken in the entire Roman Empire dominion. It is like English in the current world. The language which the Lord Jesus and the Jews spoke was the Syro-Chaldaic(Aramaic).


Apostle Paul was a Roman citizen by birth. He was a native speaker of Greek. He must have been fluent also in Aramaic that he acquired during his law education under Gamaliel, a leading authority in the Sanhedrin in the mid-1st century in Jerusalem. It is not surprising that he was a human author more than half of the New Testament books written in Koine Greek.
Paul said about himself in Acts 22:3;


“I am a Jew, born in Tarsus of Cilicia, but brought up in this city. Under Gamaliel I was thoroughly trained in the law of our fathers and was just as zealous for God as any of you are today.”

Tarsus was a city of Cilicia in the south coastal region of Asia Minor, modern Turkey and the scene of the first meeting between Mark Antony and Cleopatra, and the birthplace of Paul the Apostle.


It was, at one period, the capital of all Cilicia, and became a rival to Alexandria in Egypt and Athens in Greece in the arts and sciences. The inhabitants, in the time of Julius Caesar, having shown themselves friendly to the Romans, were endowed with all the privileges of Roman citizens; and it was on this account that Apostle Paul claimed the rights of a Roman citizen.

What I really want to point out at this juncture is this;


1.      As Paul had used Greek language in his mission, we can serve the Lord by using any languages we acquired.


2.      As Paul had used his prestigious status of Roman citizenship, we can use it for the cause of gospel mission if needed.


3.      As Paul had used his education/training for the service to God’s people, we can use our hard earned degrees/experiences/specialty for His service.

Whatever we do we need to keep maintaining this attitude; “ Soli Deo Gloria” – All For God’s Glory.
Then we will be rewarded greatly from the Lord when He returns. Amen.