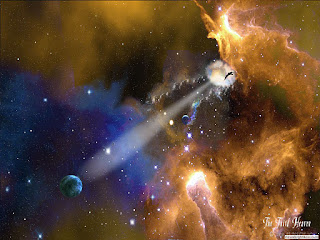 
“In the beginning God created the heavens and the earth.”


שָׁמַ֫יִם shamayim -  In the Bibel this word is used to denote;


1. visible heavens, sky, where stars are

However, we can hardly think God created the Heaven where He resides when He created the heavens and earth we live in. The Hebrew word ‘שָׁמַ֫יִם’ implies plurality of  heaven which He created.  Also the ambiguity of the term שָׁמַ֫יִם shamayim in the Hebrew Bible, and the fact that it’s a plural word, give “heavens” various interpretations regarding its nature and scope.


שָׁמַ֫יִם is mentioned several times in the first chapter of Genesis. It appears in the first verse as a creation of God. His dividing the light from the darkness in verses 4 and 5 this has been interpreted as the separation of heaven into two sections: day (God’s throne) and night (where our universe is contained).


In verse 8 heaven refers to the atmosphere over the earth in which birds fly, and in verse 14 it’s the setting for the celestial lights, later identified (verse 16) as the sun, moon and stars.


A third concept of Heaven, also called shamayi h'shamayim (םשמיה שמי or “Heaven of Heavens”) is mentioned in such passages as Genesis 28:12, Deuteronomy 10:14 and 1 Kings 8:27 as a distinctly spiritual realm containing (or being traveled by) angels and God.

The following I am quoting from http://www.letusreason.org/Biblexp130.htm and I believe it is worth reading to enrich your understanding of Genesis 1:1.

How many heavens are there and what is the third heaven Paul speaks of in 2 Corinthians 12?

The Hebrew word for “heavens” is shamayim, it is in a plural form, meaning “heights,” “elevations.” It is found in the first verse of the Bible (Genesis 1:1; 2:1). The Bible teaches in the beginning God created the heavens and the earth, he did not make another heaven after this time. The phrase “heavens and earth” are used to indicate the whole universe (Genesis 1:1; Jeremiah 23:24; Acts 17:24).

According to the Jewish tradition from the Bible there were three heavens. All are attributed to God as the Creator. Psalm 102:25 “Of old You laid the foundation of the earth, and the heavens are the work of Your hands.”

The Bible speaks of three heavens (not 7 and these are not dimensions). The first being our immediate atmosphere, the second is outer space as far as it stretches, and the third is the place where God himself dwells. What Jesus called the “Father's house.”

Gen 1:14 Then God said, “Let there be lights in the firmament of the heavens to divide the day from the night.” The first heaven consists of the clouds and the atmosphere, the heavens above us, until we come to the stars.

Psalms 78: 23-23 “Yet He had commanded the clouds above, and opened the doors of heaven, had rained down manna on them to eat, and given them of the bread of heaven.”

The expression doors of heaven or windows of heaven involved the firmament, our atmosphere. Descriptions used of this heaven is from where God would provide food or rain.

Genesis 7:11-12: “the windows of heaven were opened. And the rain was on the earth forty days and forty nights.”

Genesis 8:2: “The fountains of the deep and the windows of heaven were also stopped, and the rain from heaven was restrained” Malachi 3:10 Says the LORD of hosts, “If I will not open for you the windows of heaven And pour out for you such blessing That there will not be room enough to receive it.” In reference to an abundant harvest of crops.“

(Deuteronomy 11:17 “Then the LORD’s anger will burn against you, and He will shut the heavens so that it will not rain and the ground will yield no produce....”

Deuteronomy 28:12: “The LORD will open the heavens, the storehouse of His bounty, to send rain on your land in season and to bless all the work of your hands.”

The second heaven is the starry heavens, where our atmosphere ends. It is the heavens in which the sun, moon, and stars are fixed in orbit. The stars are seemingly endless and the distance between all of them is staggering no wonder the Bible states;

Psalm 19:1 “The heavens declare the glory of God; and the firmament shows His handiwork.” In ancient times people were in awe of the starry expanse, today we know how immense this really is.

The firmament, or expanse, raqiya` “In which the sun, moon, stars, and constellations are fixed.” Genesis 1:17: And God placed them in the Firmament of heaven.

Isaiah 40:22: He stretcheth out the heavens as a CURTAIN, and spreadeth them out as a tent to dwell in.”

(Jeremiah 8:2) - They will be exposed to the sun and the moon and all the stars of the heavens which they have loved and served....”

The third heaven is beyond the space and stars. Where no man has seen by telescope. This heaven is the dwelling-place of God, to which Paul was taken, and whose wonders he was permitted to behold-this region where God dwells.

It is specifically named “the third heaven” by Paul in 2 Cor.12:2. Paul mentions being caught up to paradise in 2 Corinthians 12:4 the word “paradise” describes a different facet of “the third heaven.”

Heb 4:14 “Seeing then that we have a great High Priest Who has passed through the heavens, (Jesus ascended to the place He was before He became man) Heb. 7:26 “For such a High Priest was fitting for us, Who is holy, harmless, undefiled, separate from sinners, and has become higher than the heavens” meaning He is more important than the dwelling place of God and angels.

Heb 8:1 As our High Priest, He “is seated at the right hand of the Throne of the Majesty in the heavens.”

The word “heavens” is also used for visions or a spiritual event. Stephen said, “Look! I see the heavens opened and the Son of Man standing at the right hand of God!” (Acts 7:56) Mark 1:10 When Jesus was baptized “He saw the heavens parting and the Spirit descending upon Him like a dove.”

Heaven is the abode of the righteous who are in possession of “everlasting life,” “an eternal weight of glory” (2 Corinthians 4:17), where they are delivered from all sufferings forever, a deliverance from all evils (2 Corinthians 5:1,2). Christ calls it his “Father’s House” (John 14:2), also “paradise” (Luke 23:43).

Heaven is the inheritance of all believers where there is “fullness of joy,” everlasting blessedness. The “place, of our inheritance where Jesus went ahead to “prepare” for us (John 14:2) that we may be with him, where He is.