1In the third year of Hoshea son of Elah king of Israel, Hezekiah son of Ahaz king of Judah began to reign.2He was twenty-five years old when he became king, and he reigned in Jerusalem twenty-nine years. His mother’s name was Abijaha daughter of Zechariah. 3He did what was right in the Eyes of the Lord, just as his father David had done.

4He removed the high places, 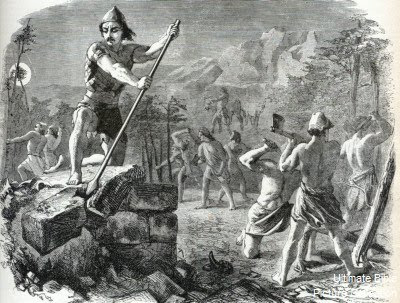 smashed the sacred stones and cut down the Asherah poles. 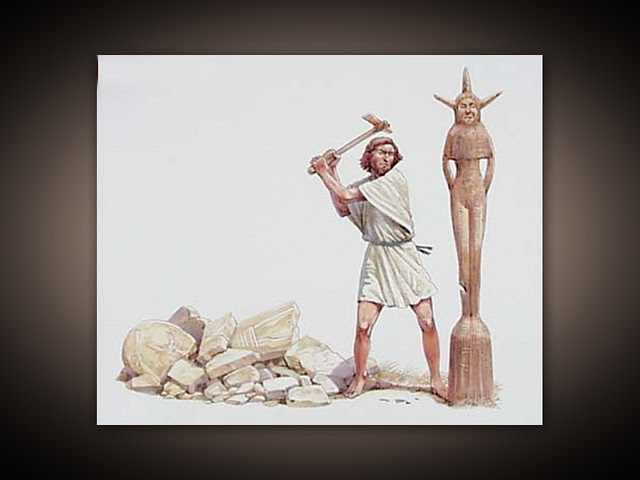 He broke into pieces the bronze snake Moses had made, for up to that time the Israelites had been burning incense to it. (It was called Nehushtan.b ) 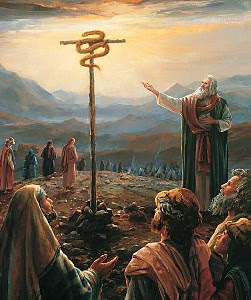 5Hezekiah trusted in the Lord, the God of Israel. There was no one like him among all the kings of Judah, either before him or after him. 6He held fast to the Lord and did not stop following Him; he kept the Commands the Lord had given Moses. 7And the Lord was with him; he was successful in whatever he undertook. He rebelled against the king of Assyria and did not serve him. 8From watchtower to fortified city, he defeated the Philistines, as far as Gaza and its territory.

9In King Hezekiah’s fourth year, which was the seventh year of Hoshea son of Elah king of Israel, Shalmaneser king of Assyria marched against Samaria and laid siege to it. 10At the end of three years the Assyrians took it. So Samaria was captured in Hezekiah’s sixth year, which was the ninth year of Hoshea king of Israel. 11The king of Assyria deported Israel to Assyria and settled them in Halah, in Gozan on the Habor River and in towns of the Medes. 12This happened because they had not obeyed the Lord their God, but had violated His Covenant—all that Moses the servant of the Lord commanded. They neither listened to the Commands nor carried them out.

16At this time Hezekiah king of Judah stripped off the gold with which he had covered the doors and doorposts of the Temple of the Lord, and gave it to the king of Assyria.

17The king of Assyria sent his supreme commander, his chief officer and his field commander with a large army, from Lachish to King Hezekiah at Jerusalem. They came up to Jerusalem and stopped at the aqueduct of the Upper Pool, on the road to the Washerman’s Field. 18They called for the king; and Eliakim son of Hilkiah the palace administrator, Shebna the secretary, and Joah son of Asaph the recorder went out to them.

19The field commander said to them, “Tell Hezekiah:

“ ‘This is what the great king, the king of Assyria, says: On what are you basing this confidence of yours? 20You say you have the counsel and the might for war—but you speak only empty words. On whom are you depending, that you rebel against me? 21Look, I know you are depending on Egypt, that splintered reed of a staff, which pierces the hand of anyone who leans on it! Such is Pharaoh king of Egypt to all who depend on him. 22But if you say to me, “We are depending on the Lord our God”—isn’t He the One Whose high places and altars Hezekiah removed, saying to Judah and Jerusalem, “You must worship before this altar in Jerusalem”?

23“ ‘Come now, make a bargain with my master, the king of Assyria: I will give you two thousand horses—if you can put riders on them! 24How can you repulse one officer of the least of my master’s officials, even though you are depending on Egypt for chariots and horsemene ? 25Furthermore, have I come to attack and destroy this place without word from the Lord? The Lord Himself told me to march against this country and destroy it.’ ”

26Then Eliakim son of Hilkiah, and Shebna and Joah said to the field commander, “Please speak to your servants in Aramaic, since we understand it. Don’t speak to us in Hebrew in the hearing of the people on the wall.”

27But the commander replied, “Was it only to your master and you that my master sent me to say these things, and not to the people sitting on the wall—who, like you, will have to eat their own excrement and drink their own urine?”

31“Do not listen to Hezekiah. This is what the king of Assyria says: Make peace with me and come out to me. Then each of you will eat fruit from your own vine and fig tree and drink water from your own cistern,32until I come and take you to a land like your own—a land of grain and new wine, a land of bread and vineyards, a land of olive trees and honey. Choose life and not death!

“Do not listen to Hezekiah, for he is misleading you when he says, ‘The Lord will deliver us.’ 33Has the god of any nation ever delivered his land from the hand of the king of Assyria? 34Where are the gods of Hamath and Arpad? Where are the gods of Sepharvaim, Hena and Ivvah? Have they rescued Samaria from my hand? 35Who of all the gods of these countries has been able to save his land from me? How then can the Lord deliver Jerusalem from my hand?”

36But the people remained silent and said nothing in reply, because the king had commanded, “Do not answer him.”

37Then Eliakim son of Hilkiah the palace administrator, Shebna the secretary, and Joah son of Asaph the recorder went to Hezekiah, with their clothes torn, and told him what the field commander had said.

He removed the high places and broke the image. The methods adopted by this good king for extirpating idolatry, and accomplishing a thorough reformation in religion, are fully detailed (2 Chronicles 20:3; 31:19). But they are indicated very briefly.

He broke in pieces the bronze serpent too. The preservation of this remarkable relic of antiquity (Numbers 21:5-10) might, like the pot of manna and Aaron's rod, have remained an interesting and instructive monument of the Divine Goodness and Mercy to the Israelites in the wilderness: and it must have required the exercise of no small courage and resolution to destroy it.

But in the progress of degeneracy it had become an object of idolatrous worship and as the interests of true religion rendered its demolition necessary, Hezekiah, by taking this bold step, consulted both the Glory of God and the good of his country. In those days the children of Israel did burn incense to it—It is not to be supposed that this superstitious reverence had been paid to it ever since the time of Moses, for such idolatry would not have been tolerated either by David or by Solomon in the early part of his reign, by Asa or Jehoshaphat had they been aware of such a folly.

But the probability is that the introduction of this superstition does not date earlier than the time when the family of Ahab, by their alliance with the throne of Judah, exercised a pernicious influence in paving the way for all kinds of idolatry. It is possible, however that its origin may have arisen out of a misapprehension of Moses' language (Numbes 21:8). Serpent-worship, how revolting it may appear, was an extensively diffused form of idolatry; and it would obtain an easier reception in Israel because many of the neighboring nations, such as the Egyptians and Phoenicians, adored idol gods in the form of serpents as the emblems of health and immortality.
Posted by 지구 여행객 JOHN KIM at 4:15 PM