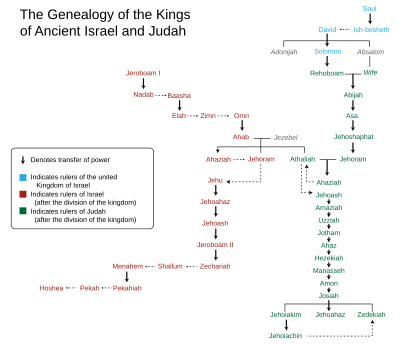 1The prophet Elisha summoned a man from the company of the prophets and said to him, “Tuck your cloak into your belt, take this flask of olive oil with you and go to Ramoth Gilead. 2When you get there, look for Jehu son of Jehoshaphat, the son of Nimshi. Go to him, get him away from his companions and take him into an inner room. 3Then take the flask and pour the oil on his head and declare, ‘This is what the Lord says: I anoint you king over Israel.’ Then open the door and run; don’t delay!”

4So the young prophet went to Ramoth Gilead. 5When he arrived, he found the army officers sitting together. “I have a message for you, commander,” he said.

“For which of us?” asked Jehu.

“For you, commander,” he replied.

6Jehu got up and went into the house. Then the prophet poured the oil on Jehu’s head and declared, “This is what the Lord, the God of Israel, says: ‘I anoint you king over the Lord’s people Israel. 7You are to destroy the house of Ahab your master, and I will avenge the blood of my servants the prophets and the blood of all the Lord’s servants shed by Jezebel. 8The whole house of Ahab will perish. I will cut off from Ahab every last male in Israel—slave or free.a 9I will make the house of Ahab like the house of Jeroboam son of Nebat and like the house of Baasha son of Ahijah. 10As for Jezebel, dogs will devour her on the plot of ground at Jezreel, and no one will bury her.’ ” Then he opened the door and ran.

11When Jehu went out to his fellow officers, one of them asked him, “Is everything all right? Why did this maniac come to you?”

“You know the man and the sort of things he says,” Jehu replied.

Jehu said, “Here is what he told me: ‘This is what the Lord says: I anoint you king over Israel.’ ”

13They quickly took their cloaks and spread them under him on the bare steps. Then they blew the trumpet and shouted, “Jehu is king!”

14So Jehu son of Jehoshaphat, the son of Nimshi, conspired against Joram. (Now Joram and all Israel had been defending Ramoth Gilead against Hazael king of Aram, 15but King Joramb had returned to Jezreel to recover from the wounds the Arameans had inflicted on him in the battle with Hazael king of Aram.) Jehu said, “If you desire to make me king, don’t let anyone slip out of the city to go and tell the news in Jezreel.”16Then he got into his chariot and rode to Jezreel, because Joram was resting there and Ahaziah king of Judah had gone down to see him.

17When the lookout standing on the tower in Jezreel saw Jehu’s troops approaching, he called out, “I see some troops coming.”

“Get a horseman,” Joram ordered. “Send him to meet them and ask, ‘Do you come in peace?’ ”

18The horseman rode off to meet Jehu and said, “This is what the king says: ‘Do you come in peace?’ ”

“What do you have to do with peace?” Jehu replied. “Fall in behind me.”

The lookout reported, “The messenger has reached them, but he isn’t coming back.”

19So the king sent out a second horseman. When he came to them he said, “This is what the king says: ‘Do you come in peace?’ ”

Jehu replied, “What do you have to do with peace? Fall in behind me.”

20The lookout reported, “He has reached them, but he isn’t coming back either. The driving is like that of Jehu son of Nimshi—he drives like a maniac.”

21“Hitch up my chariot,” Joram ordered. And when it was hitched up, Joram king of Israel and Ahaziah king of Judah rode out, each in his own chariot, to meet Jehu. They met him at the plot of ground that had belonged to Naboth the Jezreelite. 22When Joram saw Jehu he asked, “Have you come in peace, Jehu?”

“How can there be peace,” Jehu replied, “as long as all the idolatry and witchcraft of your mother Jezebel abound?”

23Joram turned about and fled, calling out to Ahaziah, “Treachery, Ahaziah!”

24Then Jehu drew his bow and shot Joram between the shoulders. The arrow pierced his heart and he slumped down in his chariot.

25Jehu said to Bidkar, his chariot officer, “Pick him up and throw him on the field that belonged to Naboth the Jezreelite. Remember how you and I were riding together in chariots behind Ahab his father when the Lord spoke this prophecy against him: 26‘Yesterday I saw the blood of Naboth and the blood of his sons, declares the Lord, and I will surely make you pay for it on this plot of ground, declares the Lord.’c Now then, pick him up and throw him on that plot, in accordance with the Word of the Lord.”

27When Ahaziah king of Judah saw what had happened, he fled up the road to Beth Haggan.d Jehu chased him, shouting, “Kill him too!” They wounded him in his chariot on the way up to Gur near Ibleam, but he escaped to Megiddo and died there. 28His servants took him by chariot to Jerusalem and buried him with his ancestors in his tomb in the City of David. 29(In the eleventh year of Joram son of Ahab, Ahaziah had become king of Judah.)

30Then Jehu went to Jezreel. When Jezebel heard about it, she put on eye makeup, arranged her hair and looked out of a window. 31As Jehu entered the gate, she asked, “Have you come in peace, you Zimri, you murderer of your master?”e

32He looked up at the window and called out, “Who is on my side? Who?” Two or three eunuchs looked down at him. 33“Throw her down!” Jehu said. So they threw her down, and some of her blood spattered the wall and the horses as they trampled her underfoot. 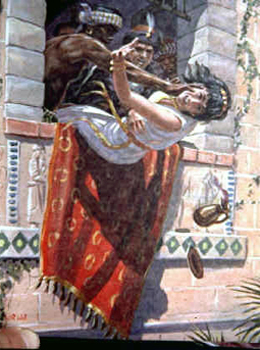 34Jehu went in and ate and drank. “Take care of that cursed woman,” he said, “and bury her, for she was a king’s daughter.” 35But when they went out to bury her, they found nothing except her skull, her feet and her hands. 36They went back and told Jehu, who said, “This is the Word of the Lord that He spoke through His servant Elijah the Tishbite: On the plot of ground at Jezreel dogs will devour Jezebel’s flesh.f 37Jezebel’s body will be like dung on the ground in the plot at Jezreel, so that no one will be able to say, ‘This is Jezebel.’ ”

Jezebel The Mother of All Wickedness

In these and the like events, we must acknowledge the secret working of God, disposing men to fulfill His purposes respecting them. Jehu was anointed king over Israel, by the Lord's special choice. The Lord still had a remnant of His people, and would yet preserve His worship among them.

Of this Jehu was reminded. He was commanded to destroy the house of Ahab, and, as far as he acted in obedience to God, and upon right principles, he needed not to regard reproach or opposition. The murder of God's prophets is strongly noticed. Jezebel persisted in idolatry and enmity to Jehovah and His servants and her iniquity was now full.

Those who faithfully deliver the Lord's message to sinners have in all ages been treated as madmen. Their judgment, speech, and conduct are contrary to those of other men; they endure much in pursuit of objects, and are influenced by motives, into which the others cannot enter. But above all, the charge is brought by the worldly and ungodly of all sorts, who are mad indeed; while the principles and practice of the devoted servants of God prove to be wise and reasonable. Some faith in the Word of God seems to have animated Jehu to this undertaking.

Jehu was a man of eager spirit. The Wisdom of God is seen in the choice of those employed in His work. But it is not for any man's reputation to be known by his fury. He that has rule over his own spirit, is better than the mighty. Joram met Jehu in the portion of Naboth. The circumstances of events are sometimes ordered by Divine Providence to make the punishment answer to the sin, as face answers to face in a glass.

The way of sin can never be the way of peace, Isaiah 57:21. What peace can sinners have with God? No peace so long as sin is persisted in; but when it is repented of and forsaken, there is peace. Joram died as a criminal, under the sentence of the Law. Ahaziah was joined with the house of Ahab. He was one of them; he had made himself so by sin. It is dangerous to join evil-doers; we shall be entangled in guilt and misery by it.

Instead of hiding herself, as one afraid of Divine vengeance, Jezebel mocked at fear. See how a heart, hardened against God, will brave it out to the last. There is not a surer presage of ruin, than an unhumbled heart under humbling providences. Let those look at Jezebel's conduct and fate, who use arts to seduce others to commit wickedness, and to draw them aside from the ways of truth and righteousness.

Jehu called for aid against Jezebel. When reformation work is on foot, it is time to ask, Who sides with it? Her attendants delivered her up. Thus she was put to death. See the end of pride and cruelty, and say, The Lord is righteous. When we pamper our bodies, let us think how vile they are; shortly they will be a feast for worms underground, or beasts above ground. May we all flee from that wrath which is revealed from heaven, against all ungodliness and unrighteousness of men.
Posted by 지구 여행객 JOHN KIM at 3:44 PM