1So King Solomon ruled over all Israel. 2And these were his chief officials:

7Solomon had twelve district governors over all Israel, who supplied provisions for the king and the royal household. Each one had to provide supplies for one month in the year. 8These are their names:

Ben-Hur—in the hill country of Ephraim;
9Ben-Deker—in Makaz, Shaalbim, Beth Shemesh and Elon Bethhanan;
10Ben-Hesed—in Arubboth (Sokoh and all the land of Hepher were his);
11Ben-Abinadab—in Naphoth Dor (he was married to Taphath daughter of Solomon);
12Baana son of Ahilud—in Taanach and Megiddo, and in all of Beth Shan next to Zarethan below Jezreel, from Beth Shan to Abel Meholah across to Jokmeam;
13Ben-Geber—in Ramoth Gilead (the settlements of Jair son of Manasseh in Gilead were his, as well as the region of Argob in Bashan and its sixty large walled cities with bronze gate bars);
14Ahinadab son of Iddo—in Mahanaim;
15Ahimaaz—in Naphtali (he had married Basemath daughter of Solomon);
16Baana son of Hushai—in Asher and in Aloth;
17Jehoshaphat son of Paruah—in Issachar;
18Shimei son of Ela—in Benjamin;
19Geber son of Uri—in Gilead (the country of Sihon king of the Amorites and the country of Og king of Bashan). He was the only governor over the district. 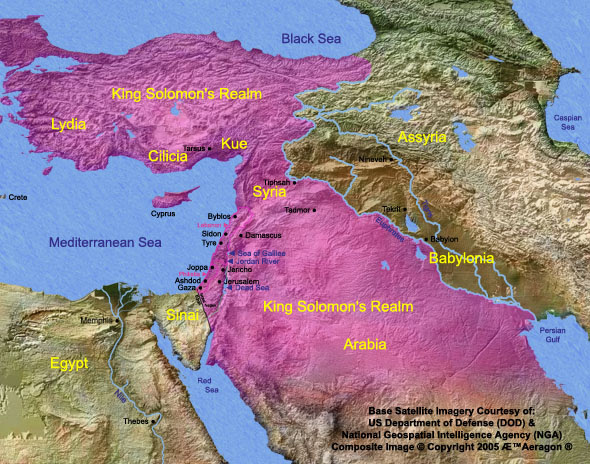 20The people of Judah and Israel were as numerous as the sand on the seashore; they ate, they drank and they were happy. 21And Solomon ruled over all the kingdoms from the Euphrates River to the land of the Philistines, as far as the border of Egypt. These countries brought tribute and were Solomon’s subjects all his life.

22Solomon’s daily provisions were thirty corsa of the finest flour and sixty corsb of meal, 23ten head of stall-fed cattle, twenty of pasture-fed cattle and a hundred sheep and goats, as well as deer, gazelles, roebucks and choice fowl. 24For he ruled over all the kingdoms west of the Euphrates River, from Tiphsah to Gaza, and had peace on all sides. 25During Solomon’s lifetime Judah and Israel, from Dan to Beersheba, lived in safety, everyone under their own vine and under their own fig tree.

27The district governors, each in his month, supplied provisions for King Solomon and all who came to the king’s table. They saw to it that nothing was lacking. 28They also brought to the proper place their quotas of barley and straw for the chariot horses and the other horses.

29God gave Solomon wisdom and very great insight, and a breadth of understanding as measureless as the sand on the seashore. 30Solomon’s wisdom was greater than the wisdom of all the people of the East, and greater than all the wisdom of Egypt. 31He was wiser than anyone else, including Ethan the Ezrahite—wiser than Heman, Kalkol and Darda, the sons of Mahol. And his fame spread to all the surrounding nations.32He spoke three thousand proverbs and his songs numbered a thousand and five. 33He spoke about plant life, from the cedar of Lebanon to the hyssop that grows out of walls. He also spoke about animals and birds, reptiles and fish. 34From all nations people came to listen to Solomon’s wisdom, sent by all the kings of the world, who had heard of his wisdom.

Never did the crown of Israel shine so bright, as when Solomon wore it. He had peace on all sides. Herein, his kingdom was a type of the Messiah's; for to Him it is promised that He shall have the heathen for His Inheritance, and that princes shall worship Him.

The spiritual peace, and joy, and holy security, of all the faithful subjects of the Lord Jesus, were typified by that of Israel. The kingdom of God is not, as Solomon's was, meat and drink, but, what is infinitely better, righteousness, and peace, and joy in the Holy Spirit.

The vast number of his attendants, and the great resort to him, are shown by the provision daily made. Herein Christ far outdoes Solomon, that He feeds all His subjects, not with the bread that perishes, but with that which endures to Eternal Life.

Solomon's wisdom was more his glory than his wealth. He had what is here called largeness of heart, for the heart is often put for the powers of the mind. He had the gift of utterance, as well as wisdom. It is very desirable, that those who have large gifts of any kind should have large hearts to use them for the good of others.

What treasures of wisdom and knowledge are lost! But every sort of knowledge that is needful for salvation is to be found in the holy Scriptures. There came persons from all parts, who were more eager after knowledge than their neighbors, to hear the wisdom of Solomon.

Solomon was herein a type of Christ, in whom are hid all treasures of wisdom and knowledge; and hid for us, for He is made of God to us, wisdom. Christ's Fame shall spread through all the earth, and men of all nations shall come to Him, learn of Him, and take upon them His easy yoke, and find rest for their souls.
Posted by 지구 여행객 JOHN KIM at 7:42 PM