I Was Unclean, But Now I Am Clean In Jesus! 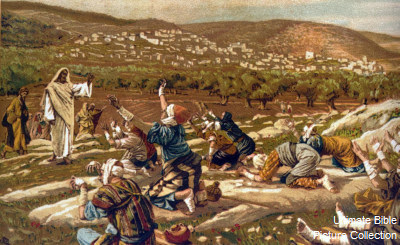 9“When anyone has a defiling skin disease, they must be brought to the priest. 10The priest is to examine them, and if there is a white swelling in the skin that has turned the hair white and if there is raw flesh in the swelling, 11it is a chronic skin disease and the priest shall pronounce them unclean. He is not to isolate them, because they are already unclean.

38“When a man or woman has white spots on the skin, 39the priest is to examine them, and if the spots are dull white, it is a harmless rash that has broken out on the skin; they are clean.

45 “Anyone with such a defiling disease must wear torn clothes, let their hair be unkempt, cover the lower part of their face and cry out, ‘Unclean! Unclean!’ 46 As long as they have the disease they remain unclean. They must live alone; they must live outside the camp.

59These are the regulations concerning defiling molds in woolen or linen clothing, woven or knitted material, or any leather article, for pronouncing them clean or unclean.

Leprosy in the Bible 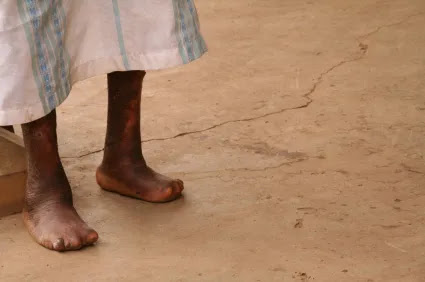 The fact of the following rules for distinguishing the plague of leprosy being incorporated with the Hebrew code of Laws, proves the existence of the odious disease among that people. But a short time, little more than a year when symptoms of leprosy seem extensively to have appeared among them; and as they could not be very liable to such a disorder amid their active journeying and in the dry open air of Arabia, the seeds of the disorder must have been laid in Egypt, where it has always been endemic.

There is every reason to believe that this was the case: that the leprosy was not a family complaint, hereditary among the Hebrews, but that they got it from their contacts with the Egyptians and from the unfavorable circumstances of their condition in the house of bondage. The great excitement and irritability of the skin in the hot and sandy regions of the East produce a far greater predisposition to leprosy of all kinds than in cooler temperatures; and cracks or blotches, inflammations or even contusions of the skin, very often lead to these in Arabia and Palestine, to some extent, but particularly in Egypt.

Besides, the subjugated and distressed state of the Hebrews in Egypt, and the nature of their employment, must have rendered them very liable to this as well as to various other blemishes of the skin; in the production of which there are no causes more active or powerful than a depressed state of body and mind, hard labor under a burning sun, the body constantly covered with the excoriating dust of brick fields, and an impoverished diet—to all of which the Israelites were exposed while under the Egyptian bondage.

It appears that, in consequence of these hardships, there was, even after they had left Egypt, a general predisposition among the Hebrews to the contagious forms of leprosy—so that it often occurred as a consequence of various other affections of the skin. And hence all blemishes or blains—especially such as had a tendency to terminate in leprosy—were watched with a jealous eye from the first [Good, Study of Medicine]. A swelling, a pimple, or bright spot on the skin, created a strong ground of suspicion of a man's being attacked by the dreaded disease.

Like the Egyptian priests, the Levites united the character of physician with that of the sacred office; and on the appearance of any suspicious eruptions on the skin, the person having these was brought before the priest—not, however, to receive medical treatment, though it is not improbable that some purifying remedies might be prescribed, but to be examined with a view to those sanitary precautions which it belonged to legislation to adopt.

The leprosy, as covering the person with a white, scaly scurf, has always been accounted an offensive blemish rather than a serious malady in the East, unless when it assumed it’s less common and malignant forms.

When a Hebrew priest, after a careful inspection, discovered under the blemish the distinctive signs of contagious leprosy, the person was immediately pronounced unclean, and is supposed to have been sent out of the camp to a place provided for that purpose.

If the symptoms appeared to be doubtful, he ordered the person to be kept in domestic confinement for seven days, when he was subjected to a second examination; and if during the previous week the eruption had subsided or appeared to be harmless, he was instantly discharged. But if the eruption continued unabated and still doubtful, he was put under surveillance another week; at the end of which the character of the disorder continued to manifest itself, and he was either doomed to perpetual exclusion from society or allowed to go at large. A person who had thus been detained on suspicion, when at length set at liberty, was obliged to "wash his clothes," as having been tainted by ceremonial pollution; and the purification through which he was required to go was, in the spirit of the Mosaic dispensation, symbolical of that inward purity it was instituted to promote.

Those doubtful cases, when they assumed a malignant character, appeared in one of two forms, apparently according to the particular constitution of the skin or of the habit generally. The one was "somewhat dark" [Leviticus 13:6]—that is, the obscure or dusky leprosy, in which the natural color of the hair (which in Egypt and Palestine is black) is not changed, as is repeatedly said in the sacred code, nor is there any depression in the dusky spot, while the patches, instead of keeping stationary to their first size, are perpetually enlarging their boundary. The patient laboring under this form was pronounced unclean by the Hebrew priest or physician, and hereby sentenced to a separation from his family and friends—a decisive proof of its being contagious.

This BRIGHT WHITE leprosy is the most malignant of all the varieties the disease exhibits, and it was marked by the following distinctive signs: A glossy white and spreading scale, upon an elevated base, the elevation depressed in the middle, but without a change of color; the black hair on the patches participating in the whiteness, and the scaly patches themselves perpetually enlarging their boundary. Several of these characteristics, taken separately, belong to other blemishes of the skin as well; so that none of them was to be taken alone, and it was only when the whole of them concurred that the Jewish priest, in his capacity of physician, was to pronounce the disease a malignant leprosy.

If it spread over the entire frame without producing any ulceration, it lost its contagious power by degrees; or, in other words, it ran through its course and exhausted itself. In that case, there being no longer any fear of further evil, either to the individual himself or to the community, the patient was declared clean by the priest, while the dry scales were yet upon him, and restored to society. If, on the contrary, the patches ulcerated and quick or fungous flesh sprang up in them, the purulent matter of which, if brought into contact with the skin of other persons, would be taken into the constitution by means of absorbent vessels, the priest was at once to pronounce it an inveterate leprosy. A temporary confinement was them declared to be totally unnecessary, and he was regarded as unclean for life [Dr. Good]. Other skin affections, which had a tendency to terminate in leprosy, though they were not decided symptoms when alone, were: "a boil" (Leviticus 13:18-23); "a hot burning,"—that is, a fiery inflammation or carbuncle (Leviticus 13:24-28); and "a dry scall" (Leviticus 13:29-37), when the leprosy was distinguished by being deeper than the skin and the hair became thin and yellow.

This modification of the leprosy is distinguished by a dull white color, and it is entirely a cutaneous disorder, never injuring the constitution. It is described as not penetrating below the skin of the flesh and as not rendering necessary an exclusion from society. It is evident, then, that this common form of leprosy is not contagious; otherwise Moses would have prescribed as strict a quarantine in this as in the other cases. And hereby we see the great superiority of the Mosaic Law (which so accurately distinguished the characteristics of the leprosy and preserved to society the services of those who were laboring under the uncontagious forms of the disease) over the customs and regulations of Eastern countries in the present day, where all lepers are indiscriminately proscribed and are avoided as unfit for free contact with their fellow men.

The person who was declared affected with the leprosy forthwith exhibited all the tokens of suffering from a heavy calamity. Rending garments and uncovering the head were common signs of mourning. As to "the putting a covering upon the upper lip," that means either wearing a moustache, or simply keeping a hand over it. All these external marks of grief were intended to proclaim, in addition to his own exclamation "Unclean!" that the person was a leper, whose company everyone must shun.

Hansen’s Disease in the Medicine
Wikipedia

Leprosy, also known as Hansen's disease (HD), is a chronic infection caused by the bacterium Mycobacterium leprae and Mycobacterium lepromatosis.  Leprosy takes its name from the Latin word Lepra, while the term "Hansen's Disease" is named after the physician Gerhard Armauer Hansen.

It is primarily a granulomatous disease of the peripheral nerves and mucosa of the upper respiratory tract; skin lesions are the primary external sign.  Left untreated, leprosy can be progressive, causing permanent damage to the skin, nerves, limbs and eyes. Contrary to folklore, leprosy does not cause body parts to fall off, although they can become numb or diseased as a result of secondary infections; these occur as a result of the body's defenses being compromised by the primary disease.

Secondary infections, in turn, can result in tissue loss causing fingers and toes to become shortened and deformed, as cartilage is absorbed into the body.  Treatment for multibacillary leprosy consists of rifampicin, dapsone, and clofazimine taken over 12 months.  Single dose multidrug therapy (MDT) for single lesion leprosy consists of rifampicin, of loxacin, and minocycline.  The move toward single-dose treatment strategies has reduced the rates of disease in some regions. World Leprosy Day was created to draw awareness to those affected by leprosy.

In 1995, the World Health Organization (WHO) estimated that between 2 and 3 million people were permanently disabled because of leprosy at that time.  In the past 20 years, 15 million people worldwide have been cured of leprosy.

Leprosy has affected humanity for over 4,000 years,  and was recognized in the civilizations of ancient China, Egypt and India. Although the forced quarantine or segregation of patients is unnecessary in places where adequate treatments are available, many leper colonies still remain around the world in countries such as India (where there are still more than 1,000 leper colonies), China,  and Japan.

Leprosy was once believed to be highly contagious and was treated with mercury—all of which applied to syphilis, which was first described in 1530. It is possible that many early cases thought to be leprosy could actually have been syphilis.  The age-old social stigma associated with the advanced form of leprosy lingers in many areas, and remains a major obstacle to self-reporting and early treatment. Effective treatment first appeared in the late 1940s. Resistance has developed to initial treatment. It was not until the introduction of MDT in the early 1980’s that the disease could be diagnosed and treated successfully within the community.