From The Sovereign Lord JESUS, Comes Escape From Death

For the director of music. Of David. A psalm. A song.

1May GOD Arise, May His enemies be scattered;
May His foes flee Before Him.

2May YOU Blow them Away like smoke—
as wax melts before the fire,
May the wicked perish Before GOD.
3But may the righteous be glad
and rejoice Before GOD;
May they be happy and joyful. 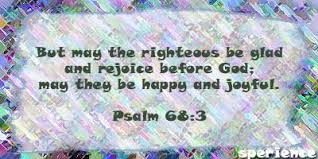 4Sing to GOD, sing in praise of His Name,
Extol Him Who Rides on the cloudsb ;
Rejoice Before Him—His Name Is The Lord.

5A father to the fatherless, a defender of widows,
Is GOD in His Holy Dwelling.

6GOD Sets the lonely in families,c
HE Leads out the prisoners with singing; 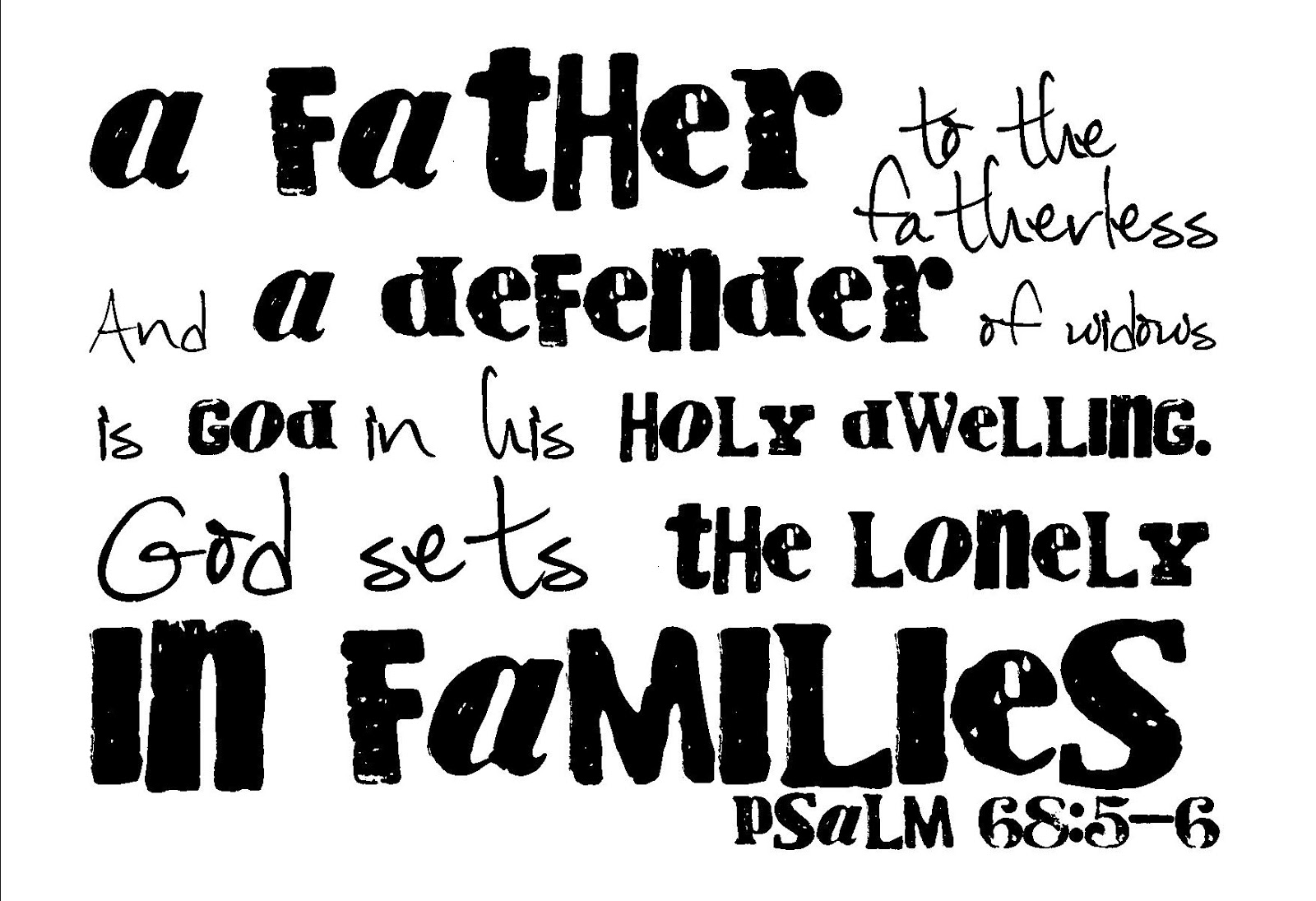 but the rebellious live in a sun-scorched land.
7When YOU, GOD, Went Out before YOUR people,
when YOU Marched Through the wilderness,
8the earth shook, the heavens poured down rain,
Before GOD, The One of Sinai,
Before GOD, The GOD of Israel.

9YOU Gave abundant showers, O GOD;
YOU Refreshed YOUR weary inheritance.
10YOUR people settled in it,
and from YOUR Bounty, GOD, YOU Provided for the poor.

11The Lord Announces The WORD,
and the women who proclaim it are a mighty throng:
12“Kings and armies flee in haste;
the women at home divide the plunder.
13Even while you sleep among the sheep pens,
the wings of my dove are sheathed with silver,
its feathers with shining gold.”

17The chariots of GOD are tens of thousands
and thousands of thousands;
The Lord Has Come from Sinai into His Sanctuary.

18 When YOU Ascended on high,
YOU Took many captives;

YOU Received gifts from people,
even from the rebellious—
that YOU, Lord GOD, Might Dwell there.

19 Praise Be To The Lord, to GOD our SAVIOR,
Who daily Bears our burdens. 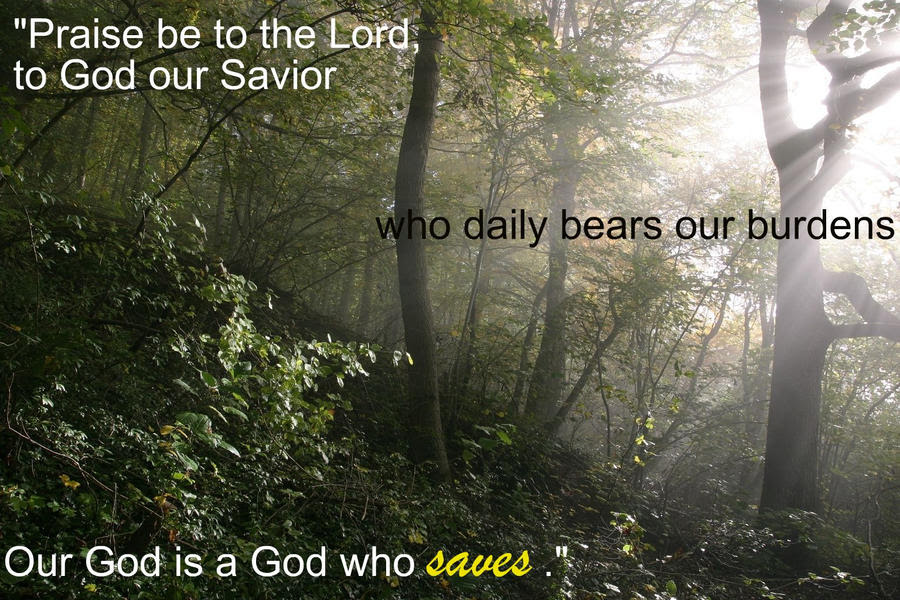 from The Sovereign Lord Comes escape from death.

21Surely GOD Will Crush the heads of His enemies,
the hairy crowns of those who go on in their sins.
22The Lord Says, “I Will Bring them from Bashan;
I Will Bring them from the depths of the sea,
23that your feet may wade in the blood of your foes,
while the tongues of your dogs have their share.”
24YOUR Procession, GOD, Has Come Into view,
the Procession of my GOD and KING Into the sanctuary.
25In front are the singers, after them the musicians;
with them are the young women playing the timbrels.
26Praise GOD in the great congregation;
Praise The Lord in the assembly of Israel.
27There is the little tribe of Benjamin, leading them,
there the great throng of Judah’s princes,
and there the princes of Zebulun and of Naphtali.
28Summon YOUR Power, GOD ;
Show us YOUR Strength, our GOD, As YOU Have Done before.
29Because of YOUR Temple at Jerusalem
kings will bring YOU gifts.
30Rebuke the beast among the reeds,
the herd of bulls among the calves of the nations.
Humbled, may the beast bring bars of silver.
Scatter the nations who delight in war.
31Envoys will come from Egypt;
Cushk will submit herself to GOD.
32Sing to GOD, you kingdoms of the earth,
Sing praise to The Lord,
33To Him Who Rides Across the highest heavens, the ancient heavens,
Who Thunders with Mighty Voice.
34Proclaim the Power of GOD,
Whose Majesty Is over Israel,
Whose Power Is in the heavens.
35YOU, GOD, Are Awesome in YOUR Sanctuary;
The GOD of Israel Gives power and strength to His people.

Praise Be To GOD!

This is a most excellent psalm, but in many places the genuine sense is not easy to come at. It does not appear when, or upon what occasion, David penned this psalm; but probably it was when, GOD Having Given him rest from all his enemies round about, he brought the Ark (which was both the token of GOD's Presence and a type of CHRIST's Mediation) from the house of Obed-edom to the tent he had pitched for it in Zion for the first words are the prayer which Moses used at the removing of the Ark, Numbers 10:35.

From this he is led, by The SPIRIT of Prophecy, to speak glorious things concerning The MESSIAH, His Ascension Into Heaven, and the Setting up of His Kingdom in the world.

II. He proceeds to praise, which takes up the rest of the psalm, calling upon all to praise GOD (v. 4, 26, 32) and suggesting many things as matter for praise.

5. The victories which CHRIST Would Obtain Over His enemies, and the Favors HE Would Bestow Upon His church (v. 21-28).

7. And so he concludes the psalm with an awful acknowledgment of the Glory and Grace of GOD (v. 32-35).