JESUS Saves Us - Not A Religion

For the director of music. To the tune of “The Lilies of the Covenant.” Of Asaph. A psalm.

1Hear us, Shepherd of Israel,
YOU Who Lead Joseph like a flock.
YOU Who Sit Enthroned between the cherubim, 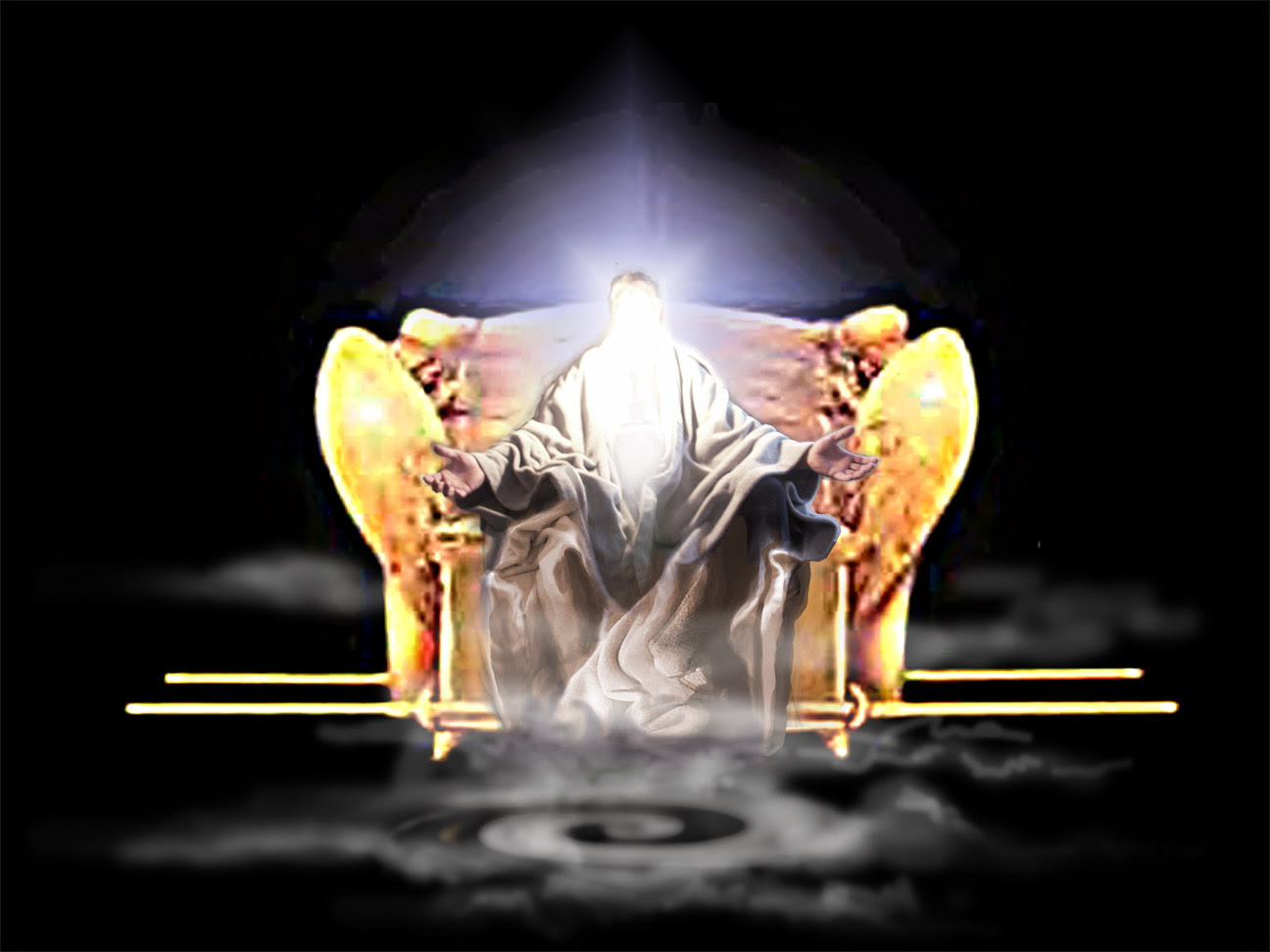 Shine forth
2before Ephraim, Benjamin and Manasseh.
Awaken YOUR Might;
Come and Save us. 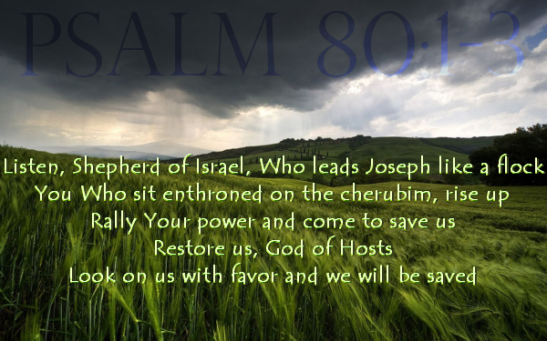 3Restore us, O GOD;
Make YOUR Face Shine On us,
that we may be saved.

4How Long, Lord GOD ALMIGHTY,
Will YOUR Anger Smolder
Against the prayers of YOUR people?
5YOU Have Fed them with the bread of tears;
YOU Have Made them drink tears by the bowlful.
6YOU Have Made us an object of derisionb to our neighbors,
and our enemies mock us.
7Restore us, GOD ALMIGHTY;
Make YOUR Face Shine On us,
that we may be saved.

8YOU Transplanted a vine from Egypt;
YOU Drove Out the nations and Planted it.
9YOU Cleared the ground for it,
and it took root and filled the land.
10The mountains were covered with its shade,
the mighty cedars with its branches.
11Its branches reached as far as the Sea,
its shoots as far as the River.
12Why Have YOU Broken Down its walls
so that all who pass by pick its grapes?
13Boars from the forest ravage it,
and insects from the fields feed on it.

14Return to us, GOD ALMIGHTY!
Look Down from heaven and See!
Watch Over this vine,
15the root YOUR Right Hand Has Planted,
The SON YOU Have Raised Up For Yourself. 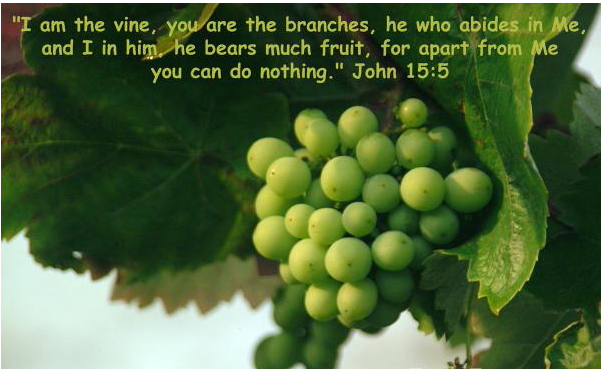 16YOUR vine is cut down, it is burned with fire;
at YOUR Rebuke YOUR people perish.

17 Let YOUR Hand Rest On The Man at YOUR Right Hand,
The Son of Man YOU Have Raised Up For YOURSELF.

18Then we will not turn away from YOU;
Revive us, and we will call on YOUR Name.

19Restore us, Lord GOD ALMIGHTY;
Make YOUR Face Shine on us,
that we may be saved.

This Psalm is much to the same purport with Psalm 79. Some think it was penned upon occasion of the desolation and captivity of the ten tribes, as the foregoing Psalm of the two. But many were the distresses of the Israel of GOD in the day of Jacob's trouble.

In singing it, we express a true love to the church and a hearty concern for its interest, with a firm confidence in GOD's Power to help it out of its greatest distresses; we make melody with our hearts to The Lord.

II. He complains of the present distresses they were under (v. 4-7).

III. He illustrates the present desolations of GOD’s Israel by the comparison of a vine and a vineyard, which had flourished, but was now destroyed (v. 8-16).

Let YOUR Hand Rest On The Man at YOUR Right Hand,The Son of Man YOU Have Raised Up For YOURSELF.

The Only Person Who Can Be Said To Be at the Right Hand of GOD as Intercessor, is JESUS The MESSIAH. Let Him become our Deliverer: appoint Him for this purpose, and let His Strength Be Manifested in our weakness! By Whom are the Jews to be restored, if indeed they ever be restored to their own land, but by JESUS CHRIST. By Him alone can they find Mercy; through Him alone can they ever be reconciled to GOD.

The MESSIAH, the Protector and Savior of the church, Is the Man of GOD's Right Hand; HE Is the Arm of The Lord, for all Power Is Given to Him. In Him is our Strength, by which we are enabled to persevere to the end. The vine, therefore, cannot be ruined, nor can any fruitful branch perish; but the unfruitful will be cut off and cast into the fire.

The end of our redemption is that we should serve Him Who Has Redeemed us, and not go back to our old sins.

Pope Francis leads the celebration of the Vespers of the Solemnity of the Conversion of Saint Paul, Jan. 25, 2014, concluding the Week of Prayer for Christian Unity, at the Basilica of St. Paul's Outside the Walls (San Paolo fuori le mura). Note that Pope Francis was seated on a great white throne (Revelation 20:11) between two golden Cherubim (Isaiah 37:16) in the apse.


3 Let no man deceive you by any means: for that day [the second coming] shall not come, except there come a falling away [apostasy] first, and that man of sin [lawlessness] be revealed, the son of perdition [destruction];


The phrase "son of perdition" is used only twice in scripture, here by Paul, and also in John 17:12, where JESUS is referring to Judas Iscariot, a type or pattern of the antichrist. Like Judas, the antichrist is a deceiver, a wolf in sheep's clothing who outwardly professes to be a loyal, faithful and obedient servant of GOD, even as he subtly and masterfully deceives most Christians into rebellion against GOD and His Law:


4 Who opposeth and exalteth himself above all that is called GOD, or that is worshiped; so that he as GOD sitteth in the Temple of GOD, shewing himself that he is GOD.


While the Bible teaches that the remnant church will call the faithful saints out of apostate Babylon by proclaiming the three angels' message (Revelation 14:6-11), the papacy is attempting the exact opposite, to unite all Christians under the papacy in an ecumenical movement.

5 Remember ye not, that, when I was yet with you, I told you these things?


When Paul was in Thessalonica, he had spoken freely with them, but he could not be so candid in his letter.

6 And now ye know what withholdeth that he [Antichrist] might be revealed in his time.
7 For the mystery of iniquity [Antichrist] doth already work: only he who now letteth [restrains] will let [restrain], until he be taken out of the way.
8 And then shall that Wicked be revealed, ...

8 ... whom the Lord shall consume with the spirit of His Mouth, and shall destroy with the brightness of his coming:


Note that in verse 7, Paul says the Antichrist is already present, but inhibited, awaiting the opportunity to work freely. This same Antichrist would be present at the second coming, destroyed by the Lord's Glory. Clearly Antichrist was not a single individual, it was a dynasty of men that would span the 1260 years of supremacy, and beyond, to the second coming.