JESUS Says, "Listen to ME, Israel, I AM HE; I AM The First and I AM The Last"

1“Listen to this, you descendants of Jacob,
you who are called by the name of Israel
and come from the line of Judah,
you who take oaths in The Name of The Lord
and invoke The GOD of Israel—
but not in truth or righteousness—
2you who call yourselves citizens of the holy city
and claim to rely on The GOD of Israel—
The Lord ALMIGHTY Is His Name:
3I Foretold the former things long ago,
My Mouth Announced them and I Made them Known;
then suddenly I Acted, and they came to pass. 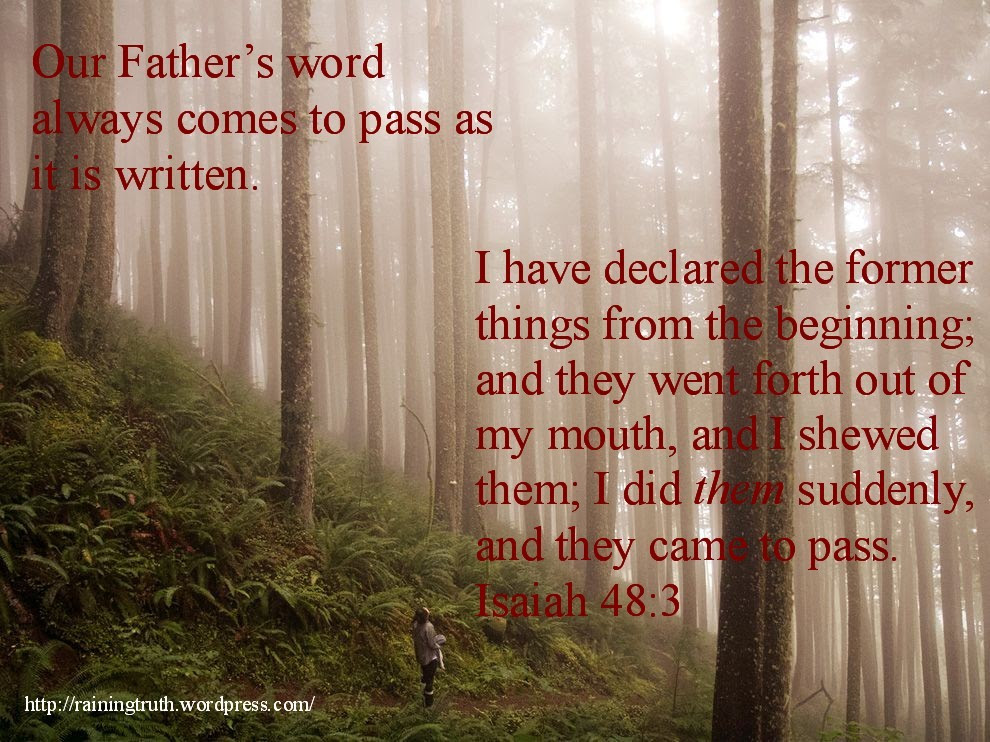 4 For I Knew how stubborn you were;
your neck muscles were iron,
your forehead was bronze.

5Therefore I Told you these things long ago;
before they happened I Announced them to you
so that you could not say,
‘My images brought them about;
my wooden image and metal god ordained them.’
6You have heard these things; look at them all.
Will you not admit them?
“From now on I Will Tell you of new things,
of hidden things unknown to you.
7They are created now, and not long ago;
you have not heard of them before today.
So you cannot say,
‘Yes, I knew of them.’
8You have neither heard nor understood;
from of old your ears have not been open.
Well Do I Know how treacherous you are;
you were called a rebel from birth.
9For My Own Name’s Sake I Delay My Wrath;
for the sake of My Praise I Hold it Back from you,
so as not to destroy you completely.

10See, I Have Refined you, though not as silver;
I Have Tested you in the furnace of affliction. 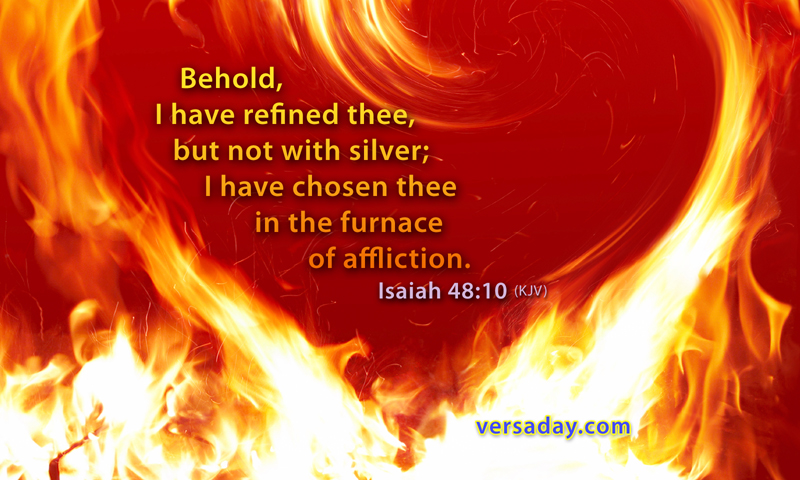 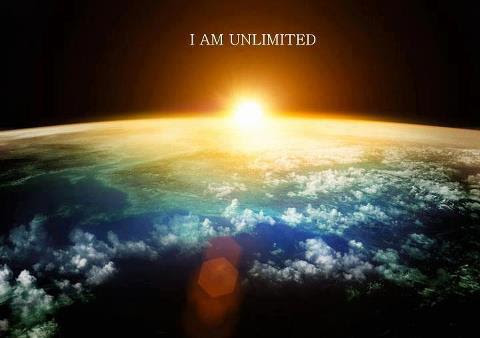 13My Own Hand Laid the foundations of the earth,
and My Right Hand spread out the heavens;
when I Summon them,
they all stand up together. 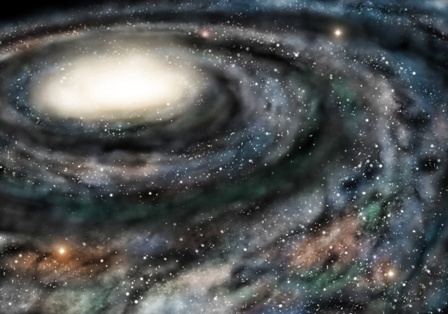 14“Come together, all of you, and listen:
Which of the idols has foretold these things?
The Lord’s chosen ally
will carry out His Purpose against Babylon;
his arm will be against the Babylonians.a
15I, even I, Have Spoken;
yes, I Have Called him.
I Will Bring him,
and he will succeed in his mission.
16“Come near ME and listen to this:
“From the first announcement I Have Not Spoken in secret;
at the time it happens, I AM There.”
And now The Sovereign Lord Has Sent ME,
Endowed with His SPIRIT.

17This Is What The Lord Says—
your REDEEMER, The HOLY ONE of Israel:
“I AM The Lord your GOD,
Who Teaches you what is best for you,
Who Directs you in the way you should go. 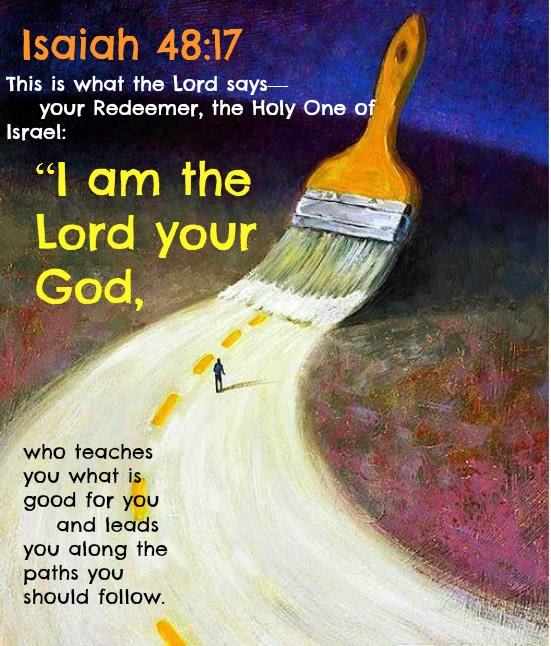 18 If only you had paid attention to My Commands,
your peace would have been like a river,
your well-being like the waves of the sea. 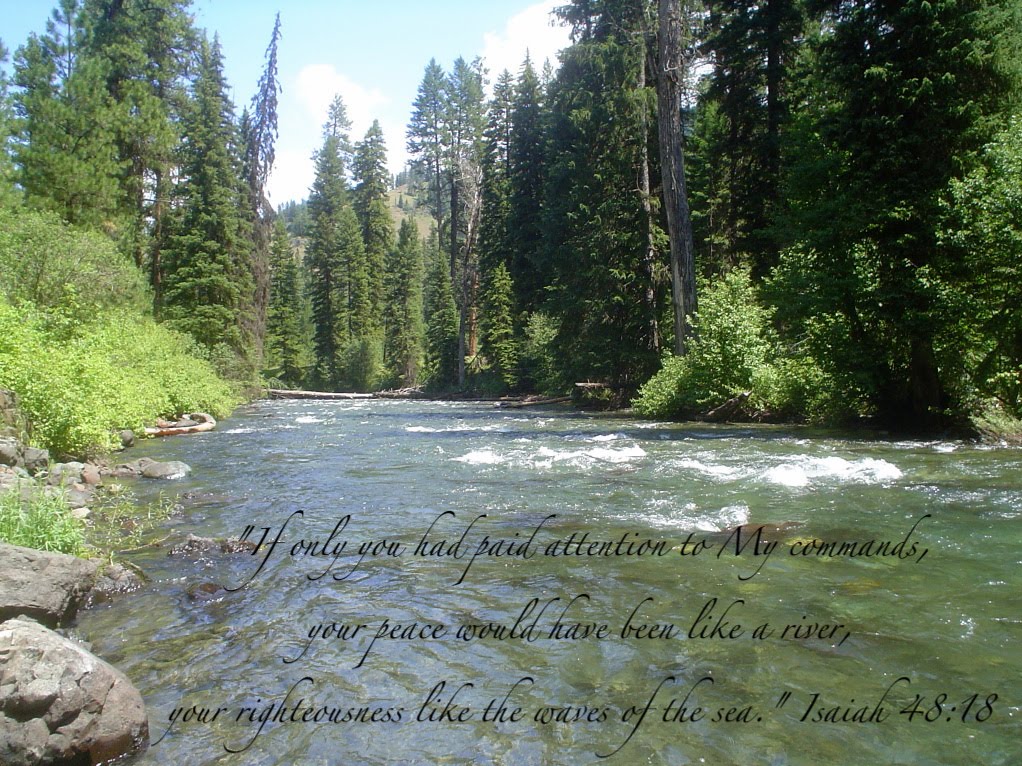 19Your descendants would have been like the sand,
your children like its numberless grains;
their name would never be blotted out
nor destroyed from Before ME.”

20Leave Babylon,
flee from the Babylonians!
Announce this with shouts of joy
and proclaim it.
Send it out to the ends of the earth;
say,

“The Lord Has Redeemed His servant Jacob.”

21They did not thirst when he led them through the deserts;
HE Made water flow for them from the rock;
HE Split the rock
and water gushed out. 
The Jews reproved for their obstinate attachment to idols, notwithstanding their experience of the Divine Providence over them and they should not have the least pretext for ascribing any portion of their success to their idols, Isaiah 48:1-8.

The ALMIGHTY, after Bringing them to the furnace for their perverseness, asserts His Glorious Sovereignty, and Repeats His Gracious Promises of deliverance and consolation, Isaiah 48:9-11. Prophecy concerning that individual (Cyrus) who shall be an instrument in the Hand of GOD of Executing His Will on Babylon, and His Power on the Chaldeans; and the idols of the people are again challenged to give a like proof of their foreknowledge, Isaiah 48:12-16.

Tender and Passionate Exclamation of JEHOVAH respecting the hardened condition of the Jewish nation, to which the very pathetic exclamation of the Divine SAVIORr, JESUS CHRIST When HE Wept Over Jerusalem may be considered a striking parallel, Isaiah 48:17-19. Notwithstanding the repeated provocations of the house of Israel, JEHOVAH Will again Be Merciful to them. They are commanded to escape from Babylon; and GOD's Gracious Favor towards them is beautifully represented by images borrowed from the exodus from Egypt, Isaiah 48:20, Isaiah 48:21.

Certain perdition of the impenitent, Isaiah 48:22. It will be proper here to remark that many passages in this chapter, and indeed the general strain of these prophecies, have a plain aspect to a restoration of the Church in the latter days upon a scale much greater than the world has yet witnessed, when the very violent fall of Babylon the Great, mentioned in the Revelation, of which the Chaldean capital was an expressive type, shall introduce by a most tremendous political convulsion, (Revelation 16:17-21), that glorious Epoch of the Gospel, which forms so conspicuous a part of the prophecies of the Old Testament, and has been a subject of the prayers of all saints in all ages.