JESUS Will Come And Show HIS Glory SOON!


1This Is What The Lord Says: 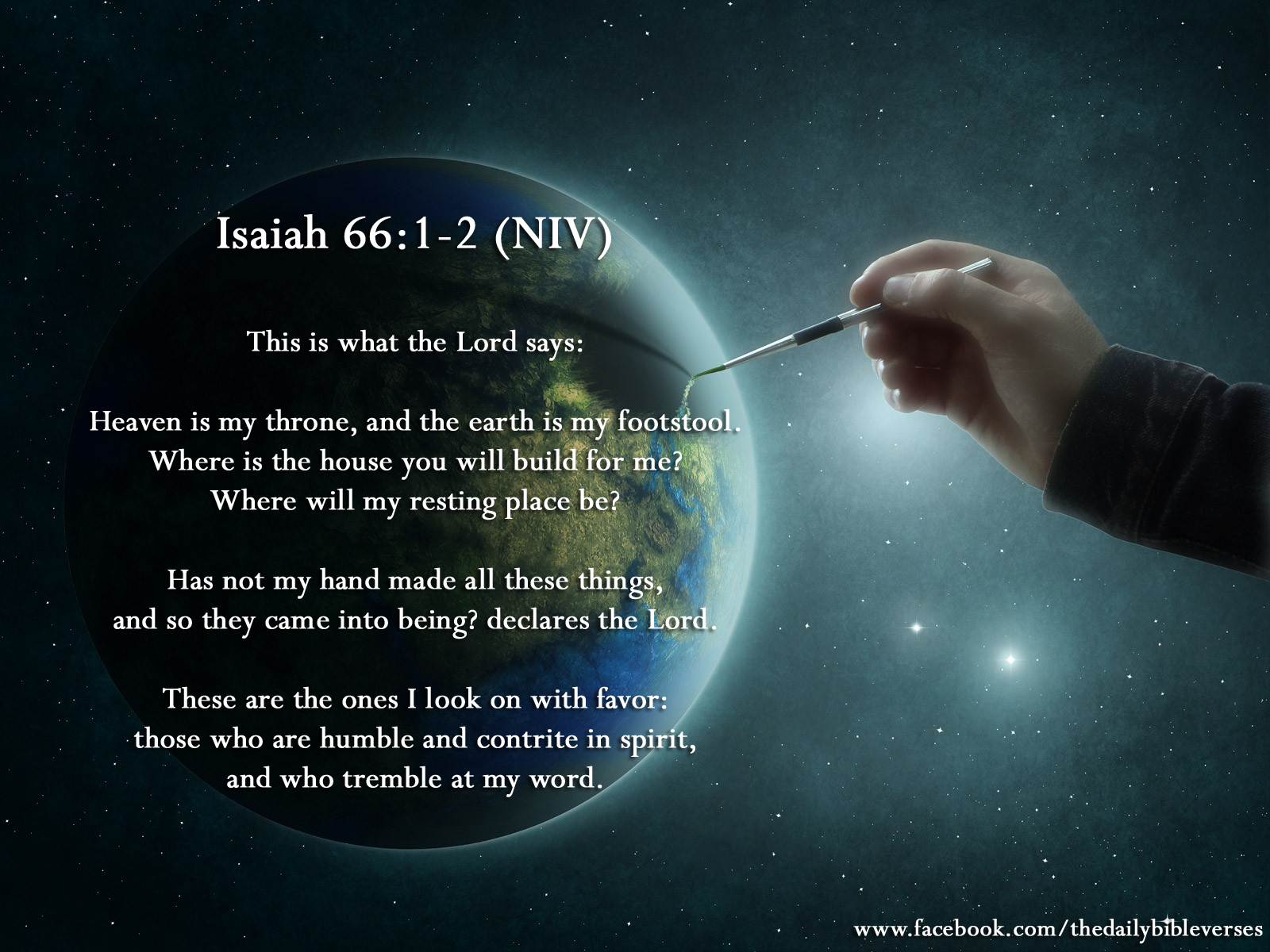 “Heaven Is My Throne,

and the earth is My Footstool. Where is the house you will build for ME?
Where Will My Resting Place Be?
2Has Not My Hand Made all these things,
and so they came into being?”

“These are the ones I Look On With Favor:
those who are humble and contrite in spirit,
and who tremble at My WORD.

3But whoever sacrifices a bull
is like one who kills a person,
and whoever offers a lamb
is like one who breaks a dog’s neck;
whoever makes a grain offering
is like one who presents pig’s blood,
and whoever burns memorial incense
is like one who worships an idol.
They have chosen their own ways,
and they delight in their abominations;
4So I Also Will Choose harsh treatment for them
and Will Bring On them what they dread.
For When I Called, no one answered,
When I Spoke, no one listened.
They did evil in My Sight
and chose what displeases ME.”

5Hear The WORD of The Lord,
you who tremble at His WORD:

“Your own people who hate you,
and exclude you because of My Name, have said,
‘Let The Lord Be Glorified,
that we may see your joy!’
Yet they will be put to shame.

6Hear that uproar from the city,
hear that noise from The Temple!
It Is The Sound of The Lord
Repaying His enemies all they deserve.
7“Before she goes into labor,
she gives birth;
before the pains come upon her,
she delivers a son.
8Who has ever heard of such things?
Who has ever seen things like this?
Can a country be born in a day
or a nation be brought forth in a moment?
Yet no sooner is Zion in labor
than she gives birth to her children.
9Do I Bring to the moment of birth
and Not Give delivery?” Says The Lord.
“Do I Close Up the womb
When I Bring to delivery?” Says your God. 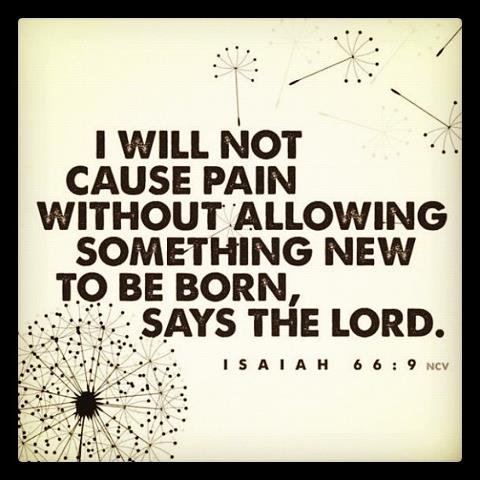 10“Rejoice with Jerusalem and be glad for her,
all you who love her;
rejoice greatly with her,
all you who mourn over her.
11For you will nurse and be satisfied
at her comforting breasts;
you will drink deeply
and delight in her overflowing abundance.”

12For This Is What The Lord Says:

“I will extend peace to her like a river,
and the wealth of nations like a flooding stream;
you will nurse and be carried on her arm
and dandled on her knees.
13As a mother comforts her child,
So Will I Comfort you;
and you will be comforted over Jerusalem.”

14When you see this, your heart will rejoice
and you will flourish like grass;
The Hand of The Lord Will Be Made Known to His servants,
but His Fury Will Be Shown to His foes.

15See, The Lord Is Coming with fire,
and His Chariots are like a whirlwind;
HE Will Bring Down His Anger with fury,
and His Rebuke with flames of fire.

16For with fire and with His Sword
The Lord Will Execute Judgment on all people,
and many will be those slain by The Lord.

17“Those who consecrate and purify themselves to go into the gardens, following one who is among those who eat the flesh of pigs, rats and other unclean things—they will meet their end together with the one they follow,” Declares The Lord.

18 “And I, because of what they have planned and done, AM About To Come and Gather the people of all nations and languages, and they will come and see My Glory.

19“I Will Set a sign among them, and I Will Send some of those who survive to the nations—to Tarshish, to the Libyansb and Lydians (famous as archers), to Tubal and Greece, and to the distant islands that have not heard of My Fame or seen My Glory. They will proclaim My Glory among the nations. 20And they will bring all your people, from all the nations, to My Holy Mountain in Jerusalem as an offering to The Lord—on horses, in chariots and wagons, and on mules and camels,” Says The Lord. “They will bring them, as the Israelites bring their grain offerings, to The Temple of The Lord in ceremonially clean vessels. 21And I Will Select some of them also to be priests and Levites,” Says The Lord.

22“As the new heavens and the new earth that I Make will endure Before ME,” Declares The Lord, “so will your name and descendants endure. 23From one New Moon to another and from one Sabbath to another, all mankind will come and bow down Before ME,” Says The Lord.

24 “And they will go out and look on the dead bodies of those who rebelled against ME; the worms that eat them will not die, the fire that burns them will not be quenched, and they will be loathsome to all mankind.”

This chapter treats of the same subject with the foregoing. GOD, by His prophet, tells the Jews, who valued themselves much on their Temple and Worship, that The MOST HIGH Dwells Not in temples made with hands; and that no outward rites of worship, while the worshipers are idolatrous and impure, can please Him Who Looks At the heart, Isaiah 66:1-3.

This leads to a threatening of vengeance for their guilt, alluding to their making void the Law of GOD by their abominable traditions, their rejection of CHRIST, persecution of His followers, and consequent destruction by the Romans. But as the Jewish ritual and people shadow forth the system of Christianity and its professors; so, in the prophetical writings, the idolatries of the Jews are frequently put for the idolatries afterwards practiced by those bearing the Christian name.

Consequently, if we would have the plenitude of meaning in this section of prophecy, which the very content requires, we must look through the type into the antitype, viz., the very gross idolatries practiced by the members of Antichrist, the pompous heap of human intentions and traditions with which they have encumbered the Christian system, their most dreadful persecution of CHRIST's spiritual and true worshipers, and the awful judgments which shall overtake them in the great and terrible Day of The Lord, Isaiah 66:4-6.

The mighty and sudden increase of The Church of Jesus Christ at the period of Antichrist's fall represented by the very strong figure of Zion being delivered of a man-child before the time of her labor, Isaiah 66:7-9. Wonderful prosperity and unspeakable blessedness of the world when the posterity of Jacob, with the fullness of the Gentiles, shall be assembled to MESSIAH's standard, Isaiah 66:10-14.

All the wicked of the earth shall be gathered together to the battle of that Great Day of GOD ALMIGHTY, and the slain of JEHOVAH shall be many, Isaiah 66:15-18. Manner of the future restoration of the Israelite from their several dispersions throughout the habitable globe, Isaiah 66:19-21.

Perpetuity of this new economy of grace to the house of Israel, Isaiah 66:22. Righteousness shall be universally diffused in the earth; and the memory of those who have transgressed against The Lord shall be had in continual abhorrence, Isaiah 66:23, Isaiah 66:24.


Thus this great prophet, after tracing the principal events of time, seems at length to have terminated his views in eternity, where all revolutions cease, where the blessedness of the righteous shall be unchangeable as the new heavens and new earth endures, and the misery of the wicked as the fire that shall not be quenched.