Obey The Command Of The KING Of Kings, JESUS CHRIST

1Who is like the wise?
Who knows the explanation of things?
A person’s wisdom brightens their face
and changes its hard appearance.

2 Obey the King’s Command, I say, because you took an oath Before GOD. 3 Do not be in a hurry to leave the King’s Presence. Do not stand up for a bad cause, for HE Will Do whatever HE Pleases. 4 Since a King’s WORD Is Supreme, who can say to Him, “What Are You Doing?”

5Whoever obeys His Command will come to no harm,
and the wise heart will know the proper time and procedure.

6For there is a proper time and procedure for every matter,
though a person may be weighed down by misery.
7Since no one knows the future,
who can tell someone else what is to come?
8As no one has power over the wind to contain it,
so no one has power over the time of their death.
As no one is discharged in time of war,
so wickedness will not release those who practice it.

9All this I saw, as I applied my mind to everything done under the sun. There is a time when a man lords it over others to his ownb hurt. 10Then too, I saw the wicked buried—those who used to come and go from the holy place and receive praisec in the city where they did this. This too is meaningless.

11When the sentence for a crime is not quickly carried out, people’s hearts are filled with schemes to do wrong. 12Although a wicked person who commits a hundred crimes may live a long time, I know that it will go better with those who fear GOD, who are reverent Before Him.

13Yet because the wicked do not fear GOD, it will not go well with them, and their days will not lengthen like a shadow. 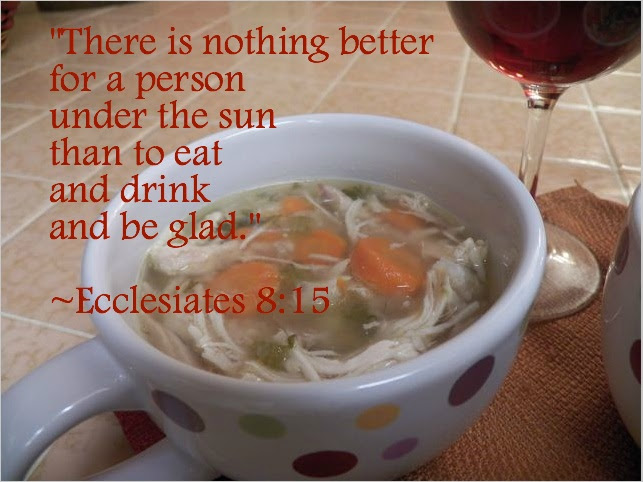 Then joy will accompany them in their toil all the days of the life GOD Has Given them under the sun.

16When I applied my mind to know wisdom and to observe the labor that is done on earth—people getting no sleep day or night— 17then I saw all that GOD Has Done. No one can comprehend what goes on under the sun. Despite all their efforts to search it out, no one can discover its meaning. Even if the wise claim they know, they cannot really comprehend it. 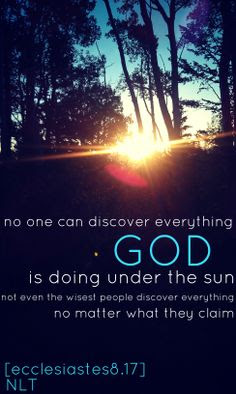 
Obey the King’s Command, I say, because you took an oath Before GOD. 3 Do not be in a hurry to leave the King’s Presence. Do not stand up for a bad cause, for HE Will Do whatever HE Pleases. 4 Since a King’s WORD Is Supreme, who can say to Him, “What Are You Doing?

I counsel you to keep the king's commandment, or “to observe the mouth of the king”; what he says, and do according to it when it is agreeably to the Law of God, and according to the laws of the kingdom, by which he is to govern; for kings are to be honored, obeyed, and submitted to, in the lawful discharge of their office: and such counsel and advice as this is wholesome; and, being taken, contributes much, as to the honor of kings, so to the good of kingdoms and states, and to a man's own peace and comfort.

And indeed, to understand it, not of an earthly king, but of The KING of kings, as it is understood by other interpreters also, suits better with what is said of this King in the following verses; Whose commandments, which are not grievous, but to be loved above fine gold, should be kept from a principle of love, as they are delivered out by Him, and to His Glory; and such a charge as this should be attended to, and such counsel should be received.

And that in regard of the Oath of GOD; Who Has Sworn, that if His children forsake His Law, and walk not in His Statutes, HE Will Visit their transgressions with a rod, and their iniquities with stripes; and therefore should be careful to keep His Commandments, Psalm 89:30. Those who interpret this of an earthly king, by the Oath of GOD understand the oath of allegiance and fidelity to him, taken in the Name and Presence of GOD, and therefore for conscience's sake should obey him.

Do not be hasty to go out of His Sight - The Sight of the KING of kings. Do not think to hide yourself from Him, for there is no fleeing from His Presence, Psalm 139:7.  It is best, as the word signifies, or under some fearful apprehension of His Wrath and Indignation, to fall down before Him, acknowledge the offense, and pray for pardon: and to this purpose is the Targum,

“And in the time of the indignation of The Lord, do not cease to pray before Him; being terrified before Him, go and pray, and seek mercy of Him”.

“Do not be troubled, saying that you will go and free from His Presence, to a place Where HE  Does Not Rule, for HE Rules in every place.”

Such who interpret this of an earthly king suppose this forbids a man going out from the presence of a king in a passion, withdrawing himself from his court and service in a heat at once. Do not stand in an evil thing - Having done it, do not continue in it; but repent of it, acknowledge and forsake it, whether against GOD or an earthly king.