There Is No "Lucifer", It Is "King of Babylon"

1The Lord Will Have Compassion on Jacob;
once again HE Will Choose Israel
and Will Settle them in their own land.
Foreigners will join them
and unite with the descendants of Jacob.
2Nations will take them
and bring them to their own place.

And Israel will take possession of the nations
and make them male and female servants in The Lord’s Land.

They will make captives of their captors
and rule over their oppressors.

3On the day The Lord Gives you relief from your suffering and turmoil and from the harsh labor forced on you, 4you will take up this taunt against the king of Babylon:

How the oppressor has come to an end!
How his fury has ended! 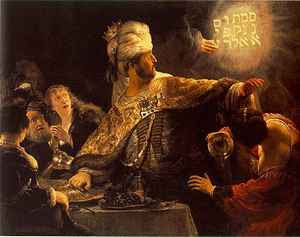 5The Lord Has Broken the rod of the wicked,
the scepter of the rulers,
6which in anger struck down peoples
with unceasing blows,
and in fury subdued nations
with relentless aggression.
7All the lands are at rest and at peace;
they break into singing.
8Even the junipers and the cedars of Lebanon
gloat over you and say,
“Now that you have been laid low,
no one comes to cut us down.”
9The realm of the dead below is all astir
to meet you at your coming;
it rouses the spirits of the departed to greet you—
all those who were leaders in the world;
it makes them rise from their thrones—
all those who were kings over the nations.
10They will all respond,
they will say to you,
“You also have become weak, as we are;
you have become like us.”
11All your pomp has been brought down to the grave,
along with the noise of your harps;
maggots are spread out beneath you
and worms cover you.

12 How you have fallen from heaven,
morning star, son of the dawn!

You have been cast down to the earth,
you who once laid low the nations!
13You said in your heart,
“I will ascend to the heavens;
I will raise my throne
above the stars of GOD;
I will sit enthroned on the mount of assembly,
on the utmost heights of Mount Zaphon.b
14I will ascend above the tops of the clouds;
I will make myself like The MOST HIGH.”
15But you are brought down to the realm of the dead,
to the depths of the pit.
16Those who see you stare at you,
they ponder your fate:
“Is this the man who shook the earth
and made kingdoms tremble,
17the man who made the world a wilderness,
who overthrew its cities
and would not let his captives go home?”
18All the kings of the nations lie in state,
each in his own tomb.
19But you are cast out of your tomb
like a rejected branch;
you are covered with the slain,
with those pierced by the sword,
those who descend to the stones of the pit.
Like a corpse trampled underfoot,
20you will not join them in burial,
for you have destroyed your land
and killed your people.
Let the offspring of the wicked
never be mentioned again.
21Prepare a place to slaughter his children
for the sins of their ancestors;
they are not to rise to inherit the land
and cover the earth with their cities.

22“I Will Rise Up against them,”
declares The Lord ALMIGHTY.
“I Will Wipe Out Babylon’s name and survivors,
her offspring and descendants,”


23“I Will Turn her into a place for owls
and into swampland;
I Will Sweep her with the broom of destruction,”
declares The Lord ALMIGHTY.

24The Lord ALMIGHTY Has Sworn, 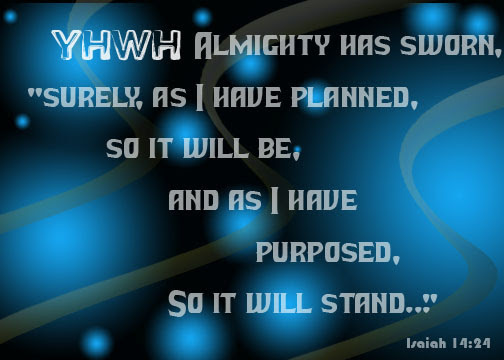 25I Will Crush the Assyrian in my land;
on my mountains I Will Trample him Down.
his yoke will be taken from My people,
and his burden removed from their shoulders.”
26This is the plan determined for the whole world;
this is the hand stretched out over all nations.
27For The Lord ALMIGHTY Has Purposed, and who can thwart Him?
His Hand Is Stretched Out, and who can turn it back? 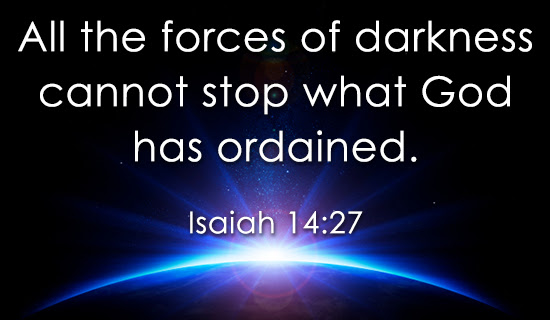 A Prophecy Against the Philistines

28This prophecy came in the year King Ahaz died:

29Do not rejoice, all you Philistines,
that the rod that struck you is broken;
from the root of that snake will spring up a viper,
its fruit will be a darting, venomous serpent.
30The poorest of the poor will find pasture,
and the needy will lie down in safety.
But your root I will destroy by famine;
it will slay your survivors.
31Wail, you gate! Howl, you city!
Melt away, all you Philistines!
A cloud of smoke comes from the north,
and there is not a straggler in its ranks.
32What answer shall be given
to the envoys of that nation?
“The Lord Has Established Zion,
and in her His afflicted people will find refuge.”

This chapter contains prophecies of the restoration of the Jews, of the fall of the king of Babylon, and the destruction of the Assyrian empire, and of the ruin of Palestine.

The moving cause of the restoration of the Jews, and their settlement in their own land, is the distinguishing Mercy of GOD towards them; the accomplishment of it, proselytes joined unto them; the means, people of other nations, who should bring them into it, and whom they should possess and rule over; and the consequence of it, rest from sorrow, fear, and hard bondage, Isaiah 14:1 upon which they are introduced as taking up a proverb, or a triumphant song, concerning the king of Babylon, wondering at his fall, and ascribing it to The Lord, Isaiah 14:4 representing the inhabitants of the earth, and great men of it, as at peace, and rest, and rejoicing, who before were continually disturbed, and smitten by him, Isaiah 14:6 introducing the dead, and those in Sheol, meeting him, and welcoming him into their regions, with taunts and jeers; upbraiding him with his weakness, shame, and disgrace he was come into; putting him in mind of his former pomp and splendor, pride, arrogance, and haughtiness, Isaiah 14:9 spectators are brought in, as amazed at the low, mean, and despicable condition he was brought into, considering what he had done in the world, in kingdoms and cities, but was now denied a burial, when other kings lay in their pompous tombs, Isaiah 14:16


And then it is foretold that that whole royal family should be cut off, and Babylon, the metropolis of his kingdom, should be utterly destroyed, Isaiah 14:21 all which was settled and fixed by the Purpose of GOD, which could not be made void, Isaiah 14:24 and next follows a prophecy of the destruction of Palestine; the date of the prophecy is given Isaiah 14:28 the inhabitants of Palestine are bid not to rejoice at the death of one of the kings of Judah, since another should arise, who would be fatal to them, Isaiah 14:29 and while the Jews would be in safety, they would be destroyed by famine and war, Isaiah 14:30 from all which it would appear, and it might be told the messengers of the nations, or any inquiring persons, that Zion is of The Lord's Founding, and under His Care and Protection, and that His people have great reason and encouragement to trust in Him, Isaiah 14:32.

“How you have fallen from heaven,
morning star, son of the dawn!”

Isaiah proceeds with the discourse which he had formerly begun as personating the dead, and concludes that the tyrant king of Babylon differs in no respect from other men, though his object was to lead men to believe that he was some god. He employs an elegant metaphor, by comparing him to Lucifer, and calls him the Son of the Dawn; and that on account of his splendor and brightness with which he shines above others.

The exposition of this passage, which some have given, as if it referred to Satan, has arisen from ignorance; for the context plainly shows that these statements must be understood in reference to the king of the Babylonians.