CHRIST Appears In A Human Form Even Before His Incarnation


Daniel’s Vision of a Man


1In the third year of Cyrus king of Persia, a revelation was given to Daniel (who was called Belteshazzar). Its message was true and it concerned a great war.a The understanding of the message came to him in a vision.

2At that time I, Daniel, mourned for three weeks. 3I ate no choice food; no meat or wine touched my lips; and I used no lotions at all until the three weeks were over.

4On the twenty-fourth day of the first month, as I was standing on the bank of the great river, the Tigris,

5 I looked up and there before me was a Man Dressed in linen, with a belt of fine gold from Uphaz around His Waist. 6His Body Was like topaz, His Face like lightning, His Eyes like flaming torches, His Arms and Legs like the gleam of burnished bronze, and His Voice like the sound of a multitude. 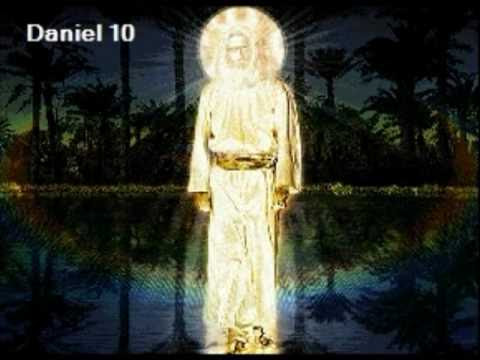 7I, Daniel, was the only one who saw the vision; those who were with me did not see it, but such terror overwhelmed them that they fled and hid themselves. 8So I was left alone, gazing at this great vision; I had no strength left, my face turned deathly pale and I was helpless. 9Then I heard Him Speaking, and as I listened to Him, I fell into a deep sleep, my face to the ground.

10A Hand Touched me and set me trembling on my hands and knees. 11HE Said, “Daniel, you who are highly esteemed, consider carefully The WORDS I AM About To Speak to you, and stand up, for I Have now Been Sent to you.” And When HE Said this to me, I stood up trembling.

12Then He Continued, “Do not be afraid, Daniel. Since the first day that you set your mind to gain understanding and to humble yourself before your GOD, your words were heard, and I Have Come in response to them. 13But the prince of the Persian kingdom resisted ME twenty-one days. Then Michael, one of the chief princes, came to help ME, because I Was Detained there with the king of Persia. 14Now I Have Come To Explain to you what will happen to your people in the future, for the vision concerns a time yet to come.”

15While HE Was Saying this to me, I bowed with my face toward the ground and was speechless. 16Then ONE Who Looked like a Man Touched my lips, and I opened my mouth and began to speak. I said to The ONE Standing before me, “I am overcome with anguish because of the vision, my Lord, and I feel very weak. 17How can I, YOUR servant, talk with YOU, my Lord? My strength is gone and I can hardly breathe.”

18Again The ONE Who Looked like a Man Touched me and Gave me strength. 19“Do not be afraid, you who are highly esteemed,” HE Said. “Peace! Be strong now; Be strong.”

When HE Spoke to me, I was strengthened and said, “Speak, my Lord, since YOU Have Given me strength.”

20So HE Said, “Do you know why I Have Come To you? Soon I Will Return To Fight Against the prince of Persia, and When I Go, the prince of Greece will come; 21but first I Will Tell you What Is Written in the Book of Truth. (No one supports me against them except Michael, your prince.)

This chapter is an introduction to the prophecies contained in the two following chapters; and begins with an account of Daniel's mourning and fasting, preparatory to the vision he had, Daniel 10:1, and of The Appearance of CHRIST to him, with the time and place of it; Who is described by his clothing, and the several parts of His Body, which were very Glorious, HE Appearing in a human form, Daniel 10:4.

Then follows an account of the effects it had upon him, Daniel 10:7, and of what encouragement and strength he received from him, by words and touches, to listen to What HE Said; and to expect a discovery and an understanding of things of moment and importance, which should be in future times, Daniel 10:10.