Cursed Is The One Who Does The Work Of JEHOVAH Deceitfully


A Message About Moab

This Is What The Lord ALMIGHTY, The GOD of Israel, Says:

“Woe to Nebo, for it will be ruined.
Kiriathaim will be disgraced and captured;
the strongholda will be disgraced and shattered.
2Moab will be praised no more;
in Heshbonb people will plot her downfall:
‘Come, let us put an end to that nation.’
You, the people of Madmen,c will also be silenced;
the sword will pursue you. 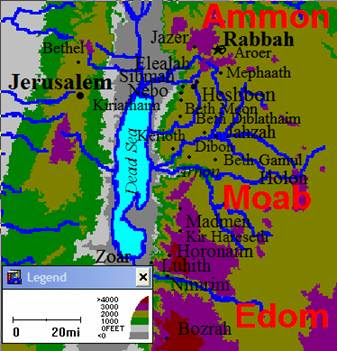 3Cries of anguish arise from Horonaim,
cries of great havoc and destruction.
4Moab will be broken;
her little ones will cry out.d
5They go up the hill to Luhith,
weeping bitterly as they go;
on the road down to Horonaim
anguished cries over the destruction are heard.
6Flee! Run for your lives;
become like a bushe in the desert.
7Since you trust in your deeds and riches,
you too will be taken captive,
and Chemosh will go into exile,
together with his priests and officials.
8The destroyer will come against every town,
and not a town will escape.
The valley will be ruined
and the plateau destroyed,
because The Lord Has Spoken.
9Put salt on Moab,
for she will be laid wastef ;
her towns will become desolate,
with no one to live in them. 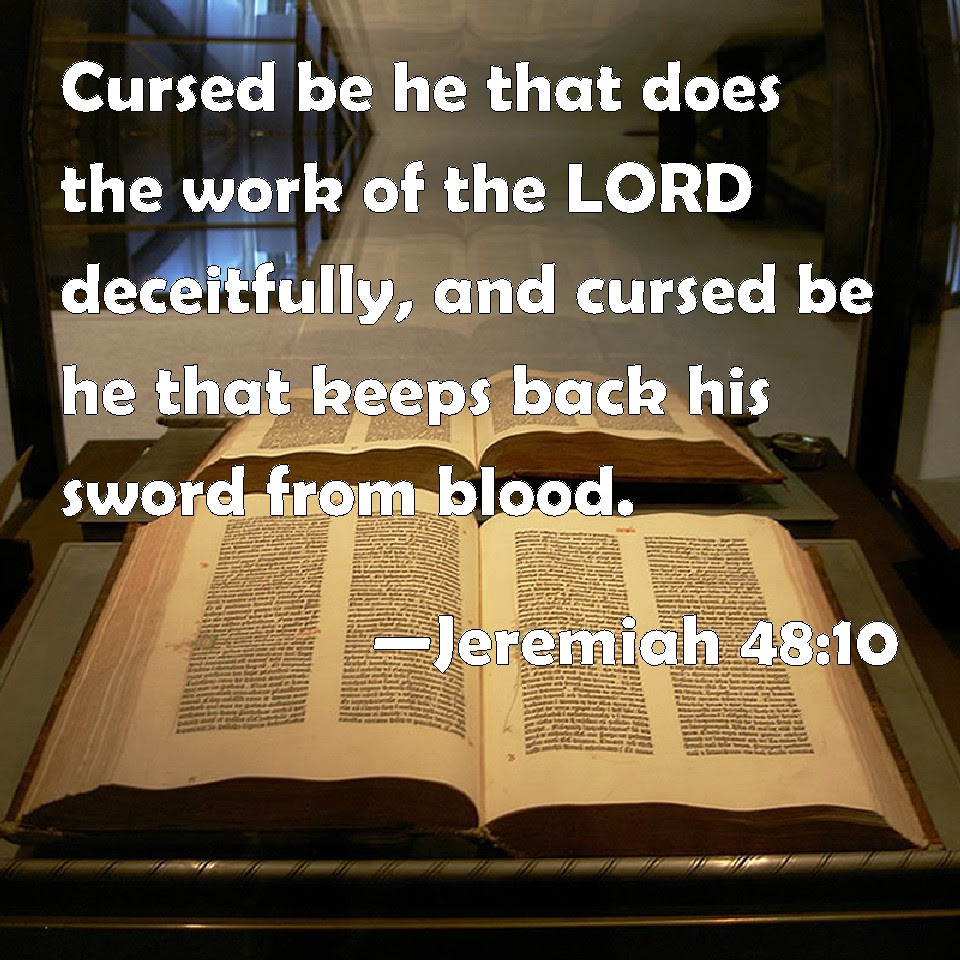 11“Moab has been at rest from youth,
like wine left on its dregs,
not poured from one jar to another—
she has not gone into exile.
So she tastes as she did,
and her aroma is unchanged.
12But days are coming,”
Declares The Lord,
“when I will send men who pour from pitchers,
and they will pour her out;
they will empty her pitchers
and smash her jars.
13Then Moab will be ashamed of Chemosh,
as Israel was ashamed
when they trusted in Bethel.

14“How can you say, ‘We are warriors,
men valiant in battle’?
15Moab will be destroyed and her towns invaded;
her finest young men will go down in the slaughter,”
declares The King, Whose Name is The Lord ALMIGHTY.
16“The fall of Moab is at hand;
her calamity will come quickly.
17Mourn for her, all who live around her,
all who know her fame;
say, ‘How broken is the mighty scepter,
how broken the glorious staff!’
18“Come down from your glory
and sit on the parched ground,
you inhabitants of Daughter Dibon,
for the one who destroys Moab
will come up against you
and ruin your fortified cities.
19Stand by the road and watch,
you who live in Aroer.
Ask the man fleeing and the woman escaping,
ask them, ‘What has happened?’
20Moab is disgraced, for she is shattered.
Wail and cry out!
Announce by the Arnon
that Moab is destroyed.
21Judgment has come to the plateau—
to Holon, Jahzah and Mephaath,
22to Dibon, Nebo and Beth Diblathaim,
23to Kiriathaim, Beth Gamul and Beth Meon,
24to Kerioth and Bozrah—
to all the towns of Moab, far and near.
25Moab’s horng is cut off;
her arm is broken,”

26“Make her drunk,
for she has defied The Lord.
Let Moab wallow in her vomit;
let her be an object of ridicule.
27Was not Israel the object of your ridicule?
Was she caught among thieves,
that you shake your head in scorn
whenever you speak of her?
28Abandon your towns and dwell among the rocks,
you who live in Moab.
Be like a dove that makes its nest
at the mouth of a cave.
29“We have heard of Moab’s pride—
how great is her arrogance!—
of her insolence, her pride, her conceit
and the haughtiness of her heart.
30I Know her insolence but it is futile,”

“and her boasts accomplish nothing.
31Therefore I wail over Moab,
for all Moab I cry out,
I moan for the people of Kir Hareseth. 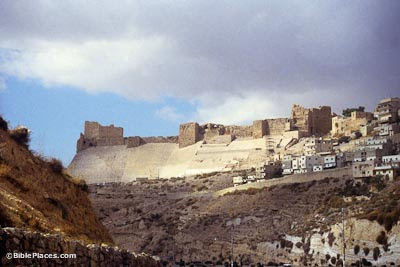 32I weep for you, as Jazer weeps,
you vines of Sibmah.
Your branches spread as far as the seah ;
they reached as far asi Jazer.
The destroyer has fallen
on your ripened fruit and grapes.
33Joy and gladness are gone
from the orchards and fields of Moab.
I have stopped the flow of wine from the presses;
no one treads them with shouts of joy.
Although there are shouts,
they are not shouts of joy.
34“The sound of their cry rises
from Heshbon to Elealeh and Jahaz,
from Zoar as far as Horonaim and Eglath Shelishiyah,
for even the waters of Nimrim are dried up.
35In Moab I Will Put an end
to those who make offerings on the high places
and burn incense to their gods,”

36“So My Heart laments for Moab like the music of a pipe;
It laments like a pipe for the people of Kir Hareseth.
The wealth they acquired is gone. 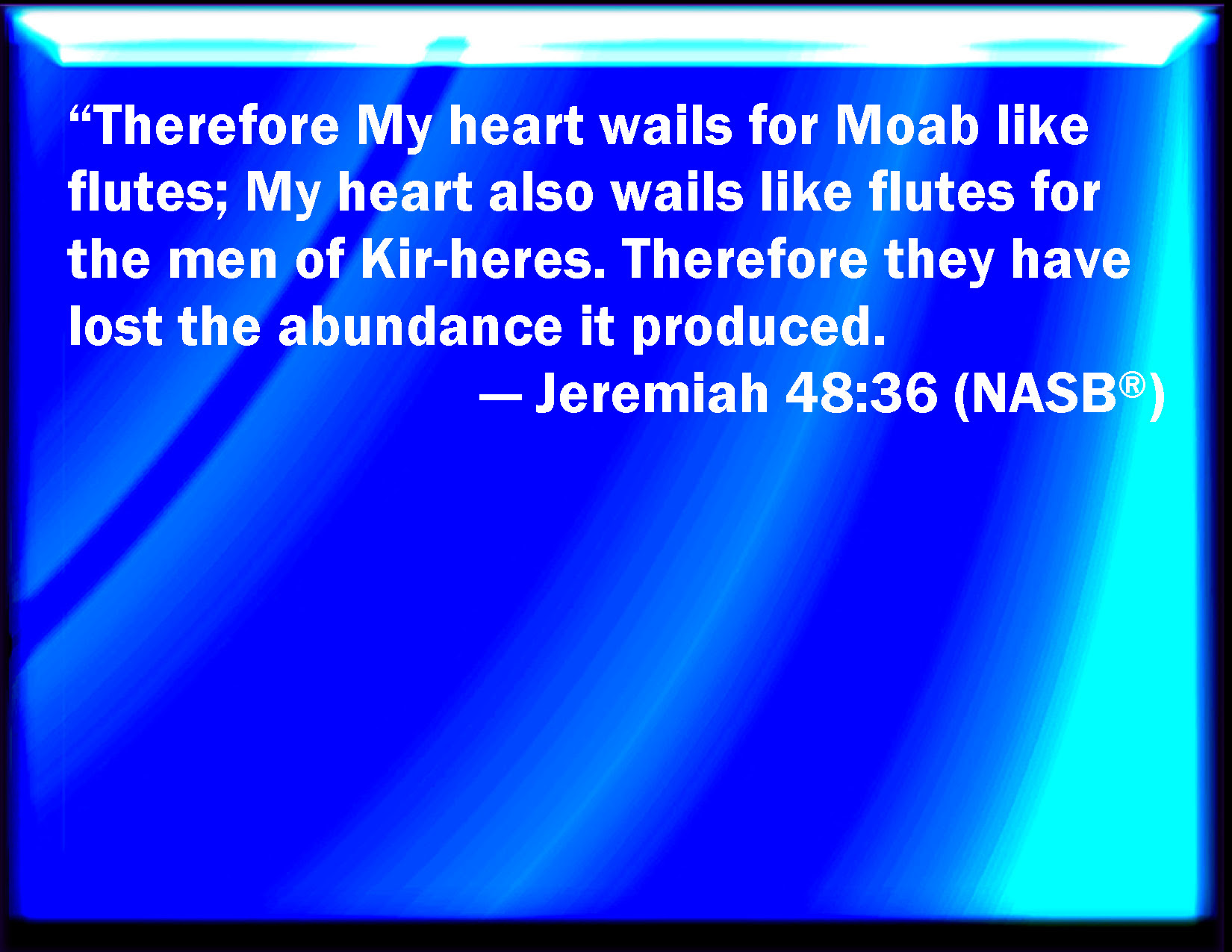 37Every head is shaved
and every beard cut off;
every hand is slashed
and every waist is covered with sackcloth.
38On all the roofs in Moab
and in the public squares
there is nothing but mourning,
for I Have Broken Moab
like a jar that no one wants,”

39“How shattered she is! How they wail!
How Moab turns her back in shame!
Moab has become an object of ridicule,
an object of horror to all those around her.”

40This Is What The Lord Says:

“Look! An eagle is swooping down,
spreading its wings over Moab.
41Keriothj will be captured
and the strongholds taken.
In that day the hearts of Moab’s warriors
will be like the heart of a woman in labor.
42Moab will be destroyed as a nation
because she defied The Lord.
43Terror and pit and snare await you,
you people of Moab,”

44“Whoever flees from the terror
will fall into a pit,
whoever climbs out of the pit
will be caught in a snare;
for I Will Bring on Moab
the year of her punishment,”

45“In the shadow of Heshbon
the fugitives stand helpless,
for a fire has gone out from Heshbon,
a blaze from the midst of Sihon;
it burns the foreheads of Moab,
the skulls of the noisy boasters.
46Woe to you, Moab!
The people of Chemosh are destroyed;
your sons are taken into exile
and your daughters into captivity.
47“Yet I Will Restore the fortunes of Moab
in days to come,”

Here ends the judgment on Moab.

Jeremiah's introduction of passages from older writers being accepted, it would seem that the passages borrowed are so in woven with that which is Jeremiah's own, that they cannot be omitted as a later interpolation without destroying the whole. On the other hand in that which is the writer's own, and even in many of the alterations of the borrowed passages, Jeremiah's mode of expression is so clearly to be recognized that the whole must be acknowledged to be his own message received from JEHOVAH.

From Isaiah 16:13 it has been conjectured that Isaiah had an ancient prophecy before him, and that Jeremiah drew from the same source. Bearing in mind the number of prophetic writings mentioned in the Books of Chronicles which have not come down to us, there is nothing unreasonable in such a supposition.