Daniel’s Vision Of A Ram And A Goat

Daniel’s Vision of a Ram and a Goat

1In the third year of King Belshazzar’s reign, I, Daniel, had a vision, after the one that had already appeared to me. 2In my vision I saw myself in the citadel of Susa in the province of Elam; in the vision I was beside the Ulai Canal.

3I looked up, and there before me was a ram with two horns, standing beside the canal, and the horns were long. One of the horns was longer than the other but grew up later. 4I watched the ram as it charged toward the west and the north and the south. No animal could stand against it, and none could rescue from its power. It did as it pleased and became great.

5As I was thinking about this, suddenly a goat with a prominent horn between its eyes came from the west, crossing the whole earth without touching the ground. 6It came toward the two-horned ram I had seen standing beside the canal and charged at it in great rage. 7I saw it attack the ram furiously, striking the ram and shattering its two horns. The ram was powerless to stand against it; the goat knocked it to the ground and trampled on it, and none could rescue the ram from its power. 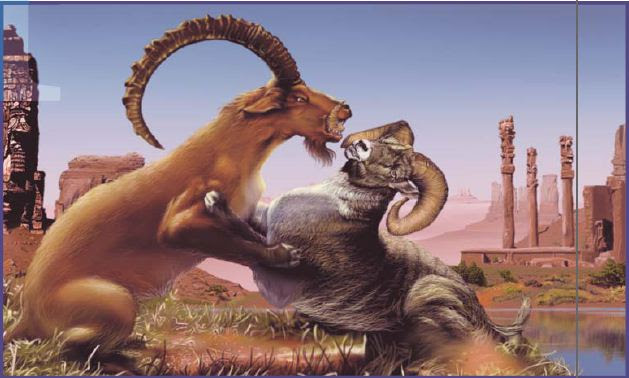 8The goat became very great, but at the height of its power the large horn was broken off, and in its place four prominent horns grew up toward the four winds of heaven.

9Out of one of them came another horn, which started small but grew in power to the south and to the east and toward the Beautiful Land. 10It grew until it reached the host of the heavens, and it threw some of the starry host down to the earth and trampled on them. 11It set itself up to be as great as The Commander of The Army of The Lord; it took away the daily sacrifice from The Lord, and His sanctuary was thrown down. 12Because of rebellion, The Lord’s peoplea and the daily sacrifice were given over to it. It prospered in everything it did, and truth was thrown to the ground.

13Then I heard a holy one speaking, and another holy one said to him, “How long will it take for the vision to be fulfilled—the vision concerning the daily sacrifice, the rebellion that causes desolation, the surrender of the Sanctuary and the trampling underfoot of The Lord’s people?”

14He said to me, “It will take 2,300 evenings and mornings; then The Sanctuary will be reconsecrated.”

The Interpretation of the Vision

15While I, Daniel, was watching the vision and trying to understand it, There before me Stood One Who Looked like a Man. 16And I heard a Man’s Voice from the Ulai calling,

“Gabriel, tell this man the meaning of the vision.” 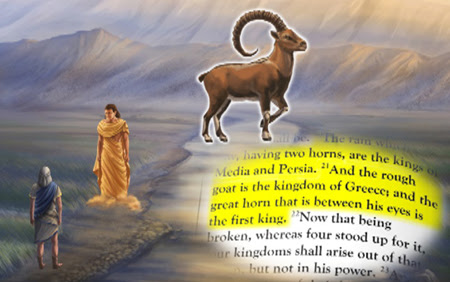 17As he came near the place where I was standing, I was terrified and fell prostrate. “Son of man,”b he said to me, “understand that the vision concerns the time of the end.”

18While he was speaking to me, I was in a deep sleep, with my face to the ground. Then he touched me and raised me to my feet.

19He said: “I am going to tell you what will happen later in the time of wrath, because the vision concerns the appointed time of the end.c 20The two-horned ram that you saw represents the kings of Media and Persia. 21The shaggy goat is the king of Greece, and the large horn between its eyes is the first king. 22The four horns that replaced the one that was broken off represent four kingdoms that will emerge from his nation but will not have the same power.

23“In the latter part of their reign, when rebels have become completely wicked, a fierce-looking king, a master of intrigue, will arise.24He will become very strong, but not by his own power. He will cause astounding devastation and will succeed in whatever he does. He will destroy those who are mighty, the holy people. 25He will cause deceit to prosper, and he will consider himself superior. When they feel secure, he will destroy many and take his stand against The Prince of princes. Yet he will be destroyed, but not by human power.

26“The vision of the evenings and mornings that has been given you is true, but seal up the vision, for it concerns the distant future.”

27I, Daniel, was worn out. I lay exhausted for several days. Then I got up and went about the king’s business. I was appalled by the vision; it was beyond understanding.


This chapter contains the vision of a ram and male goat, and the interpretation of it.

It begins with observing the time and place of the vision, Daniel 8:1, then describes the ram seen; by the place of his situation; by his two horns; and by his pushing several ways with so much force and fury, that none could stand before him, or deliver: out of his hands, Daniel 8:3 next the male goat appears, and is described by the part from whence he came; the swiftness of his motion; the notable horn between his eyes; and his running to ram in great fury, smiting him between his horns, casting him to the ground, and trampling upon him, and none to deliver, Daniel 8:5 but, after waxing great and powerful, its horn was broken, and four more rose up in its stead, and out of one of them a little horn, Daniel 8:8 which little horn is described by its power and prevalence to the south and to the east, towards the pleasant land, the host of heaven, and the Prince of the host; and by it the stars were cast down and trampled upon, the daily sacrifice made to cease; the place of The Sanctuary cast down, and truth itself, Daniel 8:9, and upon inquiry it appeared that these sacred things were to continue in this desolate condition unto 2300 days, Daniel 8:13.

Daniel wanted to know the meaning of this vision and the Angel Gabriel is ordered by The ONE Who looked like a Man, CHRIST to give him an understanding of it; who drew near to him, and awaked him out of his sleep, and gave him the interpretation of it; Daniel 8:15, which is as follows; the ram; with two horns, signifies the kings of Media and Persia; the rough goat, the king of Greece; and the great horn the first king, Alexander the great; and the four horns, four kingdoms which rose up out of the Grecian empire upon his death, Daniel 8:20.

And the little horn a king of fierce countenance, Antiochus Epiphanes, who is, described by his craft, and cunning, by his power and might, and by the destruction he should make; Daniel 8:23, this vision the angel assures the prophet was true, and bids him shut it up, since it was for many days, Daniel 8:26, upon which Daniel fainted, and was sick for a time; but afterwards recovered, so as to be able to do the king's business; but astonished at the vision himself, and which was not understood by others, Daniel 8:27.