1“Now, son of man, take a block of clay, put it in front of you and draw the city of Jerusalem on it. 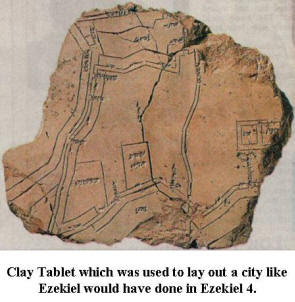 2Then lay siege to it: Erect siege works against it, build a ramp up to it, set up camps against it and put battering rams around it. 3Then take an iron pan, place it as an iron wall between you and the city and turn your face toward it. It will be under siege, and you shall besiege it. This will be a sign to the people of Israel.

6“After you have finished this, lie down again, this time on your right side, and bear the sin of the people of Judah. I have assigned you 40 days, a day for each year. 7Turn your face toward the siege of Jerusalem and with bared arm prophesy against her. 8I Will Tie you Up with ropes so that you cannot turn from one side to the other until you have finished the days of your siege.

9“Take wheat and barley, beans and lentils, millet and spelt; put them in a storage jar and use them to make bread for yourself. You are to eat it during the 390 days you lie on your side.

10Weigh out twenty shekelsb of food to eat each day and eat it at set times. 11Also measure out a sixth of a hinc of water and drink it at set times. 12Eat the food as you would a loaf of barley bread; bake it in the sight of the people, using human excrement for fuel.”

13The Lord said, “In this way the people of Israel will eat defiled food among the nations where I Will Drive them.”

14Then I said, “Not so, Sovereign Lord! I have never defiled myself. From my youth until now I have never eaten anything found dead or torn by wild animals. No impure meat has ever entered my mouth.”

15 “Very well,” HE Said, “I will let you bake your bread over cow dung instead of human excrement.”

16HE Then Said to me: “Son of man, I AM About To Cut Off the food supply in Jerusalem. The people will eat rationed food in anxiety and drink rationed water in despair, 17for food and water will be scarce. They will be appalled at the sight of each other and will waste away because ofd their sin.

This chapter contains a prophecy of the siege of Jerusalem, and of the famine that attended it. The siege is described by a portrait of the city of Jerusalem on a tile, laid before the prophet, Ezekiel 4:1; by each of the actions, representing a siege of it, as building a fort, casting a mount, and setting a camp and battering rams against it, and an iron pan for a wall, between the prophet, the besieger, and the city, Ezekiel 4:2; by his gesture, lying first on his left side for the space of three hundred ninety days, and then on his right side for the space of forty days, pointing at the time when the city should be taken, Ezekiel 4:4; and by setting his face to the siege, and uncovering his arm, and prophesying, Ezekiel 4:7; and by bands being laid on him, so that he could not turn from one side to the other, till the siege was ended, Ezekiel 4:8.

The famine is signified by bread the prophet was to make of various sorts of grain and seeds, baked with men's dung, and eaten by weight, with water drank by measure, which is applied to the people; it is suggested that this would be fulfilled by the children of Israel's eating defiled bread among the Gentiles, Ezekiel 4:9; but upon the prophet's concern about eating anything forbidden by the law, which he had never done, cow's dung is allowed instead of men's, to prepare the bread with, Ezekiel 4:14.

And the chapter is concluded with a resolution to bring a severe famine on them, to their great astonishment, and with which they should be consumed for their iniquity, Ezekiel 4:16.