JEHOVAH Says, "Whatever I Say Will Be Fulfilled Without Delay"

3“Therefore, son of man, pack your belongings for exile and in the daytime, as they watch, set out and go from where you are to another place. Perhaps they will understand, though they are a rebellious people. 4During the daytime, while they watch, bring out your belongings packed for exile. Then in the evening, while they are watching, go out like those who go into exile. 5While they watch, dig through the wall and take your belongings out through it. 6Put them on your shoulder as they are watching and carry them out at dusk. Cover your face so that you cannot see the land, for I have made you a sign to the Israelites.” 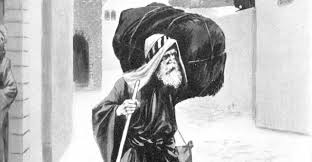 7So I did as I was commanded. During the day I brought out my things packed for exile. Then in the evening I dug through the wall with my hands. I took my belongings out at dusk, carrying them on my shoulders while they watched.

8In the morning The WORD of the Lord Came To me: 9“Son of man, did not the Israelites, that rebellious people, ask you, ‘What are you doing?’

10“Say to them, ‘This Is What The SOVEREIGN LORD Says: This prophecy concerns the prince in Jerusalem and all the Israelites who are there.’ 11Say to them, ‘I am a sign to you. “As I have done, so it will be done to them. They will go into exile as captives.

12“The prince among them will put his things on his shoulder at dusk and leave, and a hole will be dug in the wall for him to go through. He will cover his face so that he cannot see the land.

13I Will Spread My Net for him, and he will be caught in My Snare; I Will Bring him to Babylonia, the land of the Chaldeans, but he will not see it, and there he will die.

14I Will Scatter to the winds all those around him—his staff and all his troops—and I Will Pursue them with drawn sword.

17The WORD of The Lord Came To me: 18“Son of man, tremble as you eat your food, and shudder in fear as you drink your water.19Say to the people of the land: ‘This Is What The SOVEREIGN LORD Says about those living in Jerusalem and in the land of Israel: They will eat their food in anxiety and drink their water in despair, for their land will be stripped of everything in it because of the violence of all who live there. 20The inhabited towns will be laid waste and the land will be desolate. Then you will know that I AM The Lord.’ ”

There Will Be No Delay

21The WORD of The Lord Came To me: 22“Son of man, what is this proverb you have in the land of Israel: ‘The days go by and every vision comes to nothing’? 23Say to them, ‘This Is What The SOVEREIGN LORD Says: I AM Going To Put an end to this proverb, and they will no longer quote it in Israel.’ Say to them, ‘The days are near when every vision will be fulfilled. 24For there will be no more false visions or flattering divinations among the people of Israel. 25But I The Lord Will Speak What I Will, and It Shall Be Fulfilled without delay. For in your days, you rebellious people, I Will Fulfill Whatever I Say, Declares The SOVEREIGN LORD.’ ”

26The WORD of The Lord Came To me: 27“Son of man, the Israelites are saying, ‘The vision he sees is for many years from now, and he prophesies about the distant future.’

28“Therefore say to them, ‘‘This Is What The SOVEREIGN LORD Says:

None of My WORDS Will Be Delayed any longer; Whatever I Say Will Be Fulfilled, Declares The SOVEREIGN LORD.’ ” 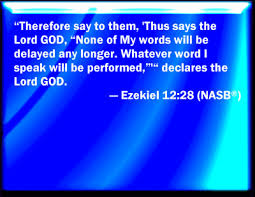 The prophet proceeds, by a variety of types and parables, to convince those of the captivity that their brethren who were left behind to sustain the miseries of a siege and the insults of a conqueror, would be in a much worse condition than they who were already settled in a foreign land.

In the beginning of this chapter he foretells the approaching captivity of Judah by action instead of words, Ezekiel 12:1-7. He predicts particularly the flight, capture, captivity, and sufferings of Zedekiah and his followers, Ezekiel 12:8-16, compared with Jeremiah 52:11. He is to eat his food with trembling and signs of terror, as an emblem of the consternation of the Jews when surrounded by their enemies, Ezekiel 12:17-20; and then he answers the objections and bywords of scoffers and infidels, who either disbelieved his threatening or supposed the accomplishment of them very distant, Ezekiel 12:21-28.

Josephus (a Jewish historian) tells us that Zedekiah thought the prophecy of Ezekiel in the thirteenth verse inconsistent with that of Jeremiah, (Jeremiah 34:3, “You will not escape from his grasp but will surely be captured and given into his hands. You will see the king of Babylon with your own eyes, and he will speak with you face to face. And you will go to Babylon.”), and resolved to believe neither. Both, however, were literary fulfilled.

Thus blinded by infidelity, sinners rush to that destruction against which they are sufficiently warned.