JEHOVAH Shows HIS Mercy Through JESUS HIS ONLY BEGOTTEN SON

1In the fourth year of Jehoiakim son of Josiah king of Judah, This WORD Came to Jeremiah from The Lord: 2“Take a scroll and write on it all The WORDS I Have Spoken to you concerning Israel, Judah and all the other nations from the time I Began Speaking to you in the reign of Josiah till now. 3Perhaps when the people of Judah hear about every disaster I plan to inflict on them, they will each turn from their wicked ways; then I Will Forgive their wickedness and their sin.”

4So Jeremiah called Baruch son of Neriah, and while Jeremiah dictated all The WORDS The Lord Had Spoken to him, Baruch wrote them on the scroll. 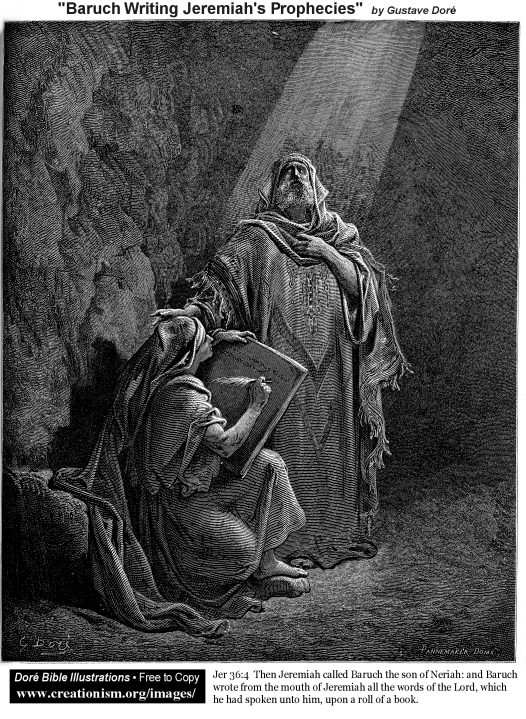 5Then Jeremiah told Baruch, “I am restricted; I am not allowed to go to The Lord’s Temple. 6So you go to The House of The Lord on a day of fasting and read to the people from the scroll The WORDS of The Lord that you wrote as I dictated. Read them to all the people of Judah who come in from their towns. 7Perhaps they will bring their petition Before The Lord and will each turn from their wicked ways, for The Anger and Wrath Pronounced against this people by The Lord Are Great.”

8Baruch son of Neriah did everything Jeremiah the prophet told him to do; at The Lord’s Temple he read The WORDS of The Lord from the scroll. 9In the ninth month of the fifth year of Jehoiakim son of Josiah king of Judah, a time of fasting Before The Lord was proclaimed for all the people in Jerusalem and those who had come from the towns of Judah. 10From the room of Gemariah son of Shaphan the secretary, which was in the upper courtyard at the entrance of the New Gate of The Temple, Baruch read to all the people at The Lord’s Temple the words of Jeremiah from the scroll.

11When Micaiah son of Gemariah, the son of Shaphan, heard all The WORDS of The Lord from the scroll, 12he went down to the secretary’s room in the royal palace, where all the officials were sitting: Elishama the secretary, Delaiah son of Shemaiah, Elnathan son of Akbor, Gemariah son of Shaphan, Zedekiah son of Hananiah, and all the other officials. 13After Micaiah told them everything he had heard Baruch read to the people from the scroll, 14all the officials sent Jehudi son of Nethaniah, the son of Shelemiah, the son of Cushi, to say to Baruch, “Bring the scroll from which you have read to the people and come.” So Baruch son of Neriah went to them with the scroll in his hand. 15They said to him, “Sit down, please, and read it to us.”

So Baruch read it to them. 16When they heard all these WORDS, they looked at each other in fear and said to Baruch, “We must report all these WORDS to the king.” 17Then they asked Baruch, “Tell us, how did you come to write all this? Did Jeremiah dictate it?”

18“Yes,” Baruch replied, “he dictated all these WORDS to me, and I wrote them in ink on the scroll.”

19Then the officials said to Baruch, “You and Jeremiah, go and hide. Don’t let anyone know where you are.”

20After they put the scroll in the room of Elishama the secretary, they went to the king in the courtyard and reported everything to him.21The king sent Jehudi to get the scroll, and Jehudi brought it from the room of Elishama the secretary and read it to the king and all the officials standing beside him. 22It was the ninth month and the king was sitting in the winter apartment, with a fire burning in the firepot in front of him. 23Whenever Jehudi had read three or four columns of the scroll, the king cut them off with a scribe’s knife and threw them into the firepot, until the entire scroll was burned in the fire.

24The king and all his attendants who heard all these WORDS showed no fear, nor did they tear their clothes. 25Even though Elnathan, Delaiah and Gemariah urged the king not to burn the scroll, he would not listen to them.
26Instead, the king commanded Jerahmeel, a son of the king, Seraiah son of Azriel and Shelemiah son of Abdeel to arrest Baruch the scribe and Jeremiah the prophet. But The Lord Had Hidden them.

27After the king burned the scroll containing the WORDS that Baruch had written at Jeremiah’s dictation, The WORD of The Lord Came to Jeremiah: 28“Take another scroll and write on it all The WORDS that were on the first scroll, which Jehoiakim king of Judah burned up.29Also tell Jehoiakim king of Judah, ‘This Is What The Lord Says: You burned that scroll and said, “Why did you write on it that the king of Babylon would certainly come and destroy this land and wipe from it both man and beast?” 30Therefore This Is What The Lord Says about Jehoiakim king of Judah: He will have no one to sit on the throne of David; his body will be thrown out and exposed to the heat by day and the frost by night. 31I Will Punish him and his children and his attendants for their wickedness; I Will Bring on them and those living in Jerusalem and the people of Judah every disaster I Pronounced against them, because they have not listened.’ ”

32So Jeremiah took another scroll and gave it to the scribe Baruch son of Neriah, and as Jeremiah dictated, Baruch wrote on it all The WORDS of the scroll that Jehoiakim king of Judah had burned in the fire. And many similar WORDS were added to them. 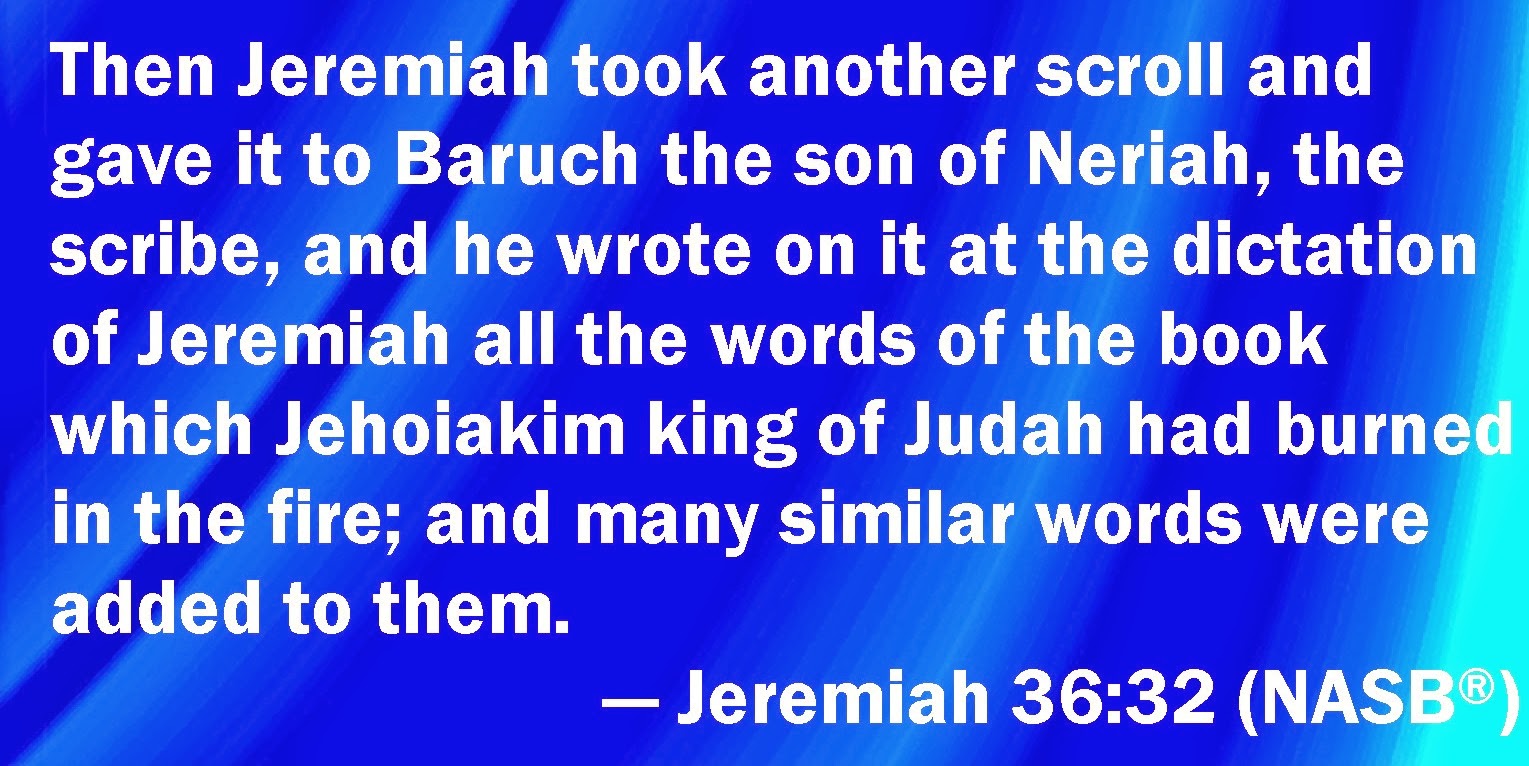 God Commands Jeremiah to write down in one roll or volume all the predictions HE Had Uttered against Israel and Judah, and all the surrounding nations, from the day of his vocation to the prophetic office, that the house of Judah might have abundant warning of the dreadful calamities with which their country was about to be visited, if not prevented by a timely repentance, Jeremiah 36:1-3.

The prophet employs Baruch the scribe, the son of Neriah, to write from his mouth all The WORDS of The Lord, and then to read them publicly upon a fast day in The Lord's House, Jeremiah 36:4-8. A general fast is proclaimed in the following year, viz., the fifth year of the reign of Jehoiakim; upon which occasion Baruch, in obedience to the prophet's command, reads the words of Jeremiah to all the people at the entry of the new gate of The Temple, Jeremiah 36:9, Jeremiah 36:10.

The princes, hearing of this, send for Baruch, who reads the roll to them; at the contents of which they are greatly alarmed, and solemnly resolve to give information to the king, at the same time advising both the prophet and his scribe to hide themselves, Jeremiah 36:11-19. Jehoiakim likewise having sent for the roll, Jehudi reads to him a part; and then the king, though advised to the contrary by some of his princes, having cut the scrolls, throws the whole into the fire, Jeremiah 36:20-25, and orders Jeremiah and Baruch to be seized; but they could not be found, because a special Providence of GOD Had Concealed them, Jeremiah 36:26.

Jeremiah is commanded to re-write his prophecies, and to denounce the Judgments of GOD against the king who had destroyed the first roll, Jeremiah 36:27-31. Baruch accordingly writes from the mouth of Jeremiah a new copy, with numerous additions, Jeremiah 36:32.