JEHOVAH Will Be Proved HOLY Through Gog's Attack On Israel


The Lord’s Great Victory Over the Nations


1The WORD of The Lord Came To me: 2“Son of man, set your face against Gog, of the land of Magog, the chief prince ofa Meshek and Tubal; prophesy against him 3and say:

I AM Against you, Gog, chief prince ofb Meshek and Tubal.4I Will Turn you around, Put hooks in your jaws and bring you out with your whole army—your horses, your horsemen fully armed, and a great horde with large and small shields, all of them brandishing their swords. 5Persia, Cushc and Put will be with them, all with shields and helmets, 6also Gomer with all its troops, and Beth Togarmah from the far north with all its troops—the many nations with you.

7“ ‘Get ready; be prepared, you and all the hordes gathered about you, and take command of them. 8After many days you will be called to arms. In future years you will invade a land that has recovered from war, whose people were gathered from many nations to the mountains of Israel, which had long been desolate. They had been brought out from the nations, and now all of them live in safety. 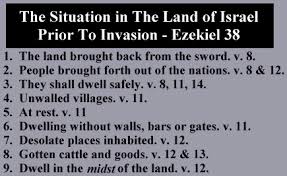 9You and all your troops and the many nations with you will go up, advancing like a storm; you will be like a cloud covering the land. 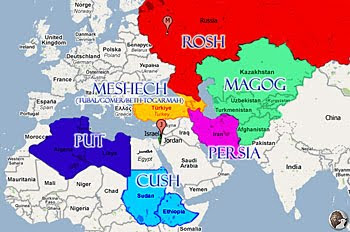 10“ ‘This Is What The SOVEREIGN LORD Says:

On that day thoughts will come into your mind and you will devise an evil scheme. 11You will say, “I will invade a land of unwalled villages; I will attack a peaceful and unsuspecting people—all of them living without walls and without gates and bars. 12I will plunder and loot and turn my hand against the resettled ruins and the people gathered from the nations, rich in livestock and goods, living at the center of the land.d ” 13Sheba and Dedan and the merchants of Tarshish and all her villagese will say to you, “Have you come to plunder? Have you gathered your hordes to loot, to carry off silver and gold, to take away livestock and goods and to seize much plunder?” ’

14“Therefore, son of man, prophesy and say to Gog:

In that day, when My people Israel are living in safety, will you not take notice of it? 15You will come from your place in the far north, you and many nations with you, all of them riding on horses, a great horde, a mighty army. 16You will advance against My people Israel like a cloud that covers the land.

In days to come, Gog, I Will Bring you against My Land, so that the nations may know ME When I AM Proved Holy through you before their eyes.

17“ ‘This Is What The SOVEREIGN LORD Says:

You are the one I Spoke of in former days by My servants the prophets of Israel. At that time they prophesied for years that I Would Bring you against them. 18This is what will happen in that day: When Gog attacks the land of Israel, My Hot Anger Will Be Aroused, Declares The SOVEREIGN LORD. 19In My Zeal and Fiery Wrath I Declare that at that time there shall be a great earthquake in the land of Israel. 20The fish in the sea, the birds in the sky, the beasts of the field, every creature that moves along the ground, and all the people on the face of the earth will tremble at My Presence. The mountains will be overturned, the cliffs will crumble and every wall will fall to the ground. 21I Will Summon a sword against Gog on all My mountains, Declares The SOVEREIGN LORD. Every man’s sword will be against his brother. 22I Will Execute Judgment on him with plague and bloodshed; I Will Pour Down torrents of rain, hailstones and burning sulfur on him and on his troops and on the many nations with him.

23And So I Will Show My Greatness and My Holiness, and I Will Make Myself Known in the sight of many nations.

Then they will know that I AM The Lord.’

38:1-13 These events will be in the latter days. It is supposed these enemies will come together to invade the land of Judea, and GOD Will Defeat them. GOD not only Sees who are now the enemies of His people, but also HE Foresees who will be so, and Lets them know by His WORD That HE Is Against them; though they join together, the wicked shall not be unpunished.

38:14-23 The enemy should make a formidable descent upon the land of Israel when Israel dwell safely under the Divine Protection.  Promises of security are treasured up in The WORD of GOD, against the troubles and dangers the church may be brought into in the latter days.

In the destruction of sinners, GOD Makes it Appear That HE Is A Great and Holy GOD.

Read an article below.

What are Gog and Magog in Ezekiel vs. Revelation?

Historically speaking, Magog was a grandson of Noah (Genesis 10:2). The descendants of Magog settled to the far north of Israel, likely in Europe and northern Asia (Ezekiel 38:2). Magog seems to be used to refer to "northern barbarians" in general, but likely also has a connection to Magog the person. The people of Magog are described as skilled warriors (Ezekiel 38:15;39:3-9).

Gog and Magog are referred to in Ezekiel 38-39 and in Revelation 20:7-8. While these two instances carry the same names, a close study of Scripture clearly demonstrates they do not refer to the same people and events. In Ezekiel’s prophecy, Gog will be the leader of a great army that attacks the land of Israel. Gog is described as “of the land of Magog, the prince of Rosh, Meshech, and Tubal” (Ezekiel 38:2-3). Ezekiel's battle of Gog and Magog occurs in the tribulation period, more specifically in the first 3 1/2 years. The strongest evidence for this view is that the attack will come when Israel is at peace (Ezekiel 38:8,11).

The description from Ezekiel is that of a nation that has security and has laid down its defenses. Israel is definitely not at peace now, and it is inconceivable that the nation would lay down its defenses apart from some major event. When Israel's covenant with the Beast/Antichrist is in effect at the beginning of Daniel's 70th Week (also known as the 7-year tribulation, Daniel 9:27a), Israel will be at peace. Possibly the battle will occur just before the midpoint of the seven-year period. According to Ezekiel, Gog will be defeated by GOD HIMSELF on the mountains of Israel. The slaughter will be so great it will take seven months to bury all of the dead (Ezekiel 39:11-12).


Gog and Magog are mentioned again in Revelation 20:7-8. The duplicated use of the names Gog and Magog in Revelation 20:8-9 is to show that these people demonstrate the same rebellion against GOD and antagonism toward GOD as those in Ezekiel 38-39. It is similar to someone today calling a person "the devil" because he or she is sinful and evil. We know that person is not really Satan, but because that person shares similar characteristics, he or she might be referred to as "the devil."


The book of Revelation uses Ezekiel's prophecy about Magog to portray a final end-times attack on the nation of Israel (Revelation 20:8-9). The result of this battle is that all are destroyed, and Satan will find his final place in the lake of fire (Revelation 20:10).


It is important to recognize that the Gog and Magog of Ezekiel 38-39 is quite different from the one in Revelation 20:7-8. Below are some of the more obvious reasons why these refer to different people and battles.


1. In the battle of Ezekiel 38-39, the armies come primarily from the north and involve only a few nations of the earth (Ezekiel 38:6,15;39:2). The battle in Revelation 20:7-9 will involve all nations, so armies will come from all directions, not just from the north.


2. There is no mention of Satan in the context of Ezekiel 38-39. In Revelation 20:7 the context clearly places the battle at the end of the millennium with Satan as the primary character.


3.Ezekiel 39:11-12 states that the dead will be buried for seven months. There would be no need to bury the dead if the battle in Ezekiel 38-39 is the one described in Revelation 20:8-9, for immediately following  Revelation 20:8-9 is the Great White Throne Judgment (20:11-15) and then the current or present heaven and earth are destroyed, replaced by a New Heaven and Earth (Revelation 21:1). There obviously will be a need to bury the dead if the battle takes place in the early part of the tribulation, for the land of Israel will be occupied for another 1,000 years, the length of the Millennial Kingdom (Revelation 20:4-6).


4. The battle in Ezekiel 38-39 is used by GOD to bring Israel back to Him (Ezekiel 39:21-29). In Revelation 20, Israel has been faithful to GOD for 1,000 years (the Millennial Kingdom). Those in Revelation 20:7-10 who are rebellious are destroyed without any more opportunity for repentance.