JEHOVAH'S WORDS Are Sealed Until The Time Of The End

1“At that time Michael, the great prince who protects your people, will arise. There will be a time of distress such as has not happened from the beginning of nations until then. But at that time your people— everyone whose name is found written in The Book — will be delivered. 2Multitudes who sleep in the dust of the earth will awake: some to everlasting life, others to shame and everlasting contempt. 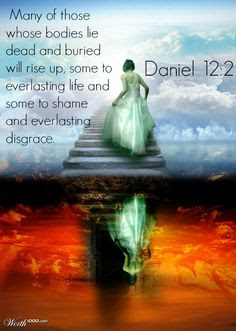 3Those who are wisea will shine like the brightness of the heavens, and those who lead many to righteousness, like the stars for ever and ever.

4 But you, Daniel, roll up and seal The WORDS of the scroll until the time of the end. Many will go here and there to increase knowledge.”

5Then I, Daniel, looked, and there before me stood two others, one on this bank of the river and one on the opposite bank. 6One of them said to the man clothed in linen, who was above the waters of the river, “How long will it be before these astonishing things are fulfilled?”

7The Man clothed in linen, Who was above the waters of the river, lifted His Right Hand and His Left Hand toward Heaven, and I heard him swear by Him Who Lives forever, saying,

“It will be for a time, times and half a time. When the power of the holy people has been finally broken, all these things will be completed.”

8I heard, but I did not understand. So I asked, “My Lord, what will the outcome of all this be?”

“Go your way, Daniel, because The WORDS Are Rolled Up and Sealed until the time of the end. 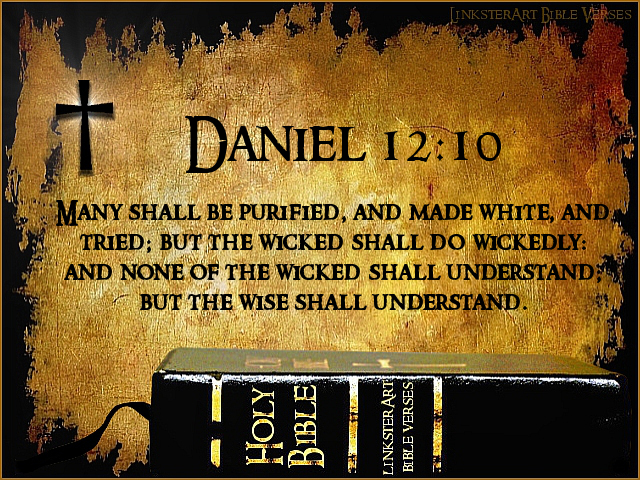 11“From the time that the daily sacrifice is abolished and the abomination that causes desolation is set up, there will be 1,290 days.

13“As for you, go your way till the end. You will rest, and then at the end of the days you will rise to receive your allotted inheritance.”


This chapter begins with an account of a time of exceeding great trouble to the people of GOD, who are comforted with the consideration of Michael the great Prince being on their side, and with a promise of deliverance, with the resurrection of the dead, and the glorious state of wise and good men upon that, Daniel 12:1.

And Daniel is ordered to shut up and seal the book of the prophecy, until a time when it should be better understood, Daniel 12:4, next follows a question put by an angel to CHRIST, and His Answer to it, with respect to the time of the fulfillment of those wonderful events, Daniel 12:5.

Daniel, not understanding what he heard, asks what would be the end of those things, Daniel 12:8 in answer to which he is bid to be content with what he knew; no alteration would be among men; things would be neither better nor worse with them, Daniel 12:9, a time is fixed for the accomplishment of all, Daniel 12:11, and it is promised him that he should have rest after death, and rise again, and have his lot and share with the blessed saints, Daniel 12:13.