JEHOVAH Says, "This Is Where I Will Live Among The Israelites Forever"


GOD’s Glory Returns to The Temple

1Then The Man Brought me to the gate facing east, 2and I saw The Glory of The GOD of Israel Coming from the east. His Voice Was like the roar of rushing waters, and the land was radiant with His Glory. 3The vision I saw was like the vision I had seen when HEa Came To Destroy the city and like the visions I had seen by the Kebar River, and I fell facedown. 4The Glory of The Lord Entered The Temple through the gate facing east. 5Then The SPIRIT Lifted me Up and Brought me into the inner court, and The Glory of The Lord Filled The Temple.

6While The Man Was Standing beside me, I heard Someone Speaking To me from inside The Temple.


“Son of man, This Is The Place of My Throne and The Place for the Soles of My Feet. This Is Where I Will Live among the Israelites forever.

The people of Israel will never again defile My Holy Name—neither they nor their kings—by their prostitution and the funeral offeringsb for their kings at their death.c 8When they placed their threshold next to My Threshold and their doorposts beside My Doorposts, with only a wall between ME and them, they defiled My Holy Name by their detestable practices. So I Destroyed them in My Anger. 9Now Let them put away from ME their prostitution and the funeral offerings for their kings, and I Will Live among them forever.

10 “Son of man, Describe The Temple to the people of Israel, that they may be ashamed of their sins. Let them consider its perfection,11and if they are ashamed of all they have done, make known to them the design of The Temple—its arrangement, its exits and entrances—its whole design and all its regulationsd and laws. Write these down before them so that they may be faithful to its design and follow all its regulations.

All the surrounding area on top of the mountain will be most holy. Such is the Law of The Temple. 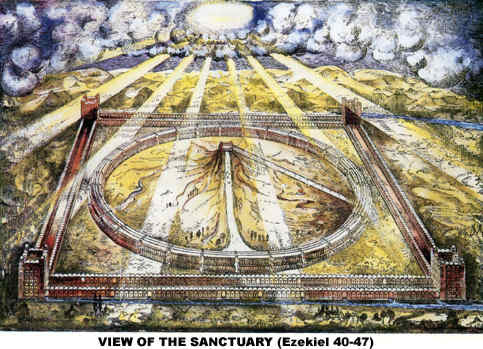 18Then HE Said To me, “Son of man, This Is What The SOVEREIGN LORD Says:

These will be the regulations for sacrificing burnt offerings and splashing blood against the altar when it is built: 19You are to give a young bull as a sin offeringl to the Levitical priests of the family of Zadok, who come near to minister before ME, Declares The SOVEREIGN LORD. 20You are to take some of its blood and put it on the four horns of the altar and on the four corners of the upper ledge and all around the rim, and so purify the altar and make atonement for it.21You are to take the bull for the sin offering and burn it in the designated part of The Temple area outside The Sanctuary
.
22“On the second day you are to offer a male goat without defect for a sin offering, and the altar is to be purified as it was purified with the bull. 23When you have finished purifying it, you are to offer a young bull and a ram from the flock, both without defect. 24You are to offer them before The Lord, and the priests are to sprinkle salt on them and sacrifice them as a burnt offering to The Lord.

25“For seven days you are to provide a male goat daily for a sin offering; you are also to provide a young bull and a ram from the flock, both without defect. 26For seven days they are to make atonement for the altar and cleanse it; thus they will dedicate it. 27At the end of these days, from the eighth day on, the priests are to present your burnt offerings and fellowship offerings on the altar. Then I Will Accept you, Declares The SOVEREIGN LORD.”

The Temple or House of GOD being measured, The Worship of GOD in it is pointed out and observed in this and the following chapter; and which, though evangelical, is expressed in the language of the Old Testament. An account is given of The Glory of The Lord Returning to the House, and the way HE Did, and His Taking Possession of it, which the prophet was favored with a view of, Ezekiel 43:1, a promise is made of His Continuance there, provided His people behaved as they should, Ezekiel 43:6, an order is given to the prophet, to show them the form and fashion, the laws, orders, and ordinances of the House to them, to be observed by them, Ezekiel 43:10, then follows the measuring of the altar of burnt offerings; which, though measured before in chapter forty, the dimensions are here given, Ezekiel 43:13.

And the chapter is concluded with directions about the consecration of it, Ezekiel 43:18.