Nothing Is Too Hard For YOU JESUS!

1This Is The WORD That Came to Jeremiah from The Lord in the tenth year of Zedekiah king of Judah, which was the eighteenth year of Nebuchadnezzar. 2The army of the king of Babylon was then besieging Jerusalem, and Jeremiah the prophet was confined in the courtyard of the guard in the royal palace of Judah.

3Now Zedekiah king of Judah had imprisoned him there, saying, “Why do you prophesy as you do? You say, ‘This Is What The Lord Says: I AM About To Give this city into the hands of the king of Babylon, and he will capture it. 4Zedekiah king of Judah will not escape the Babyloniansa but will certainly be given into the hands of the king of Babylon, and will speak with him face to face and see him with his own eyes. 5He will take Zedekiah to Babylon, where he will remain until I Deal with him, Declares The Lord. If you fight against the Babylonians, you will not succeed.’ ”

6Jeremiah said, “The WORD of The Lord Came to me: 7Hanamel son of Shallum your uncle is going to come to you and say, ‘Buy my field at Anathoth, because as nearest relative it is your right and duty to buy it.’ 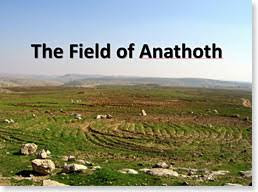 8“Then, Just As The Lord Had Said, my cousin Hanamel came to me in the courtyard of the guard and said, ‘Buy my field at Anathoth in the territory of Benjamin. Since it is your right to redeem it and possess it, buy it for yourself.’

“I knew that This Was The WORD of The Lord; 9so I bought the field at Anathoth from my cousin Hanamel and weighed out for him seventeen shekelsb of silver. 10I signed and sealed the deed, had it witnessed, and weighed out the silver on the scales. 11I took the deed of purchase—the sealed copy containing the terms and conditions, as well as the unsealed copy— 12and I gave this deed to Baruch son of Neriah, the son of Mahseiah, in the presence of my cousin Hanamel and of the witnesses who had signed the deed and of all the Jews sitting in the courtyard of the guard.

13“In their presence I gave Baruch these instructions: 14‘This Is What The Lord ALMIGHTY, The GOD of Israel, Says: Take these documents, both the sealed and unsealed copies of the deed of purchase, and put them in a clay jar so they will last a long time.

15For This Is What The Lord ALMIGHTY, The GOD of Israel, Says: Houses, fields and vineyards will again be bought in this land.’

16“After I had given the deed of purchase to Baruch son of Neriah, I prayed to The Lord:

17“Ah, Sovereign Lord, YOU Have Made the heavens and the earth by YOUR Great Power and Outstretched Arm. Nothing is too hard for YOU. 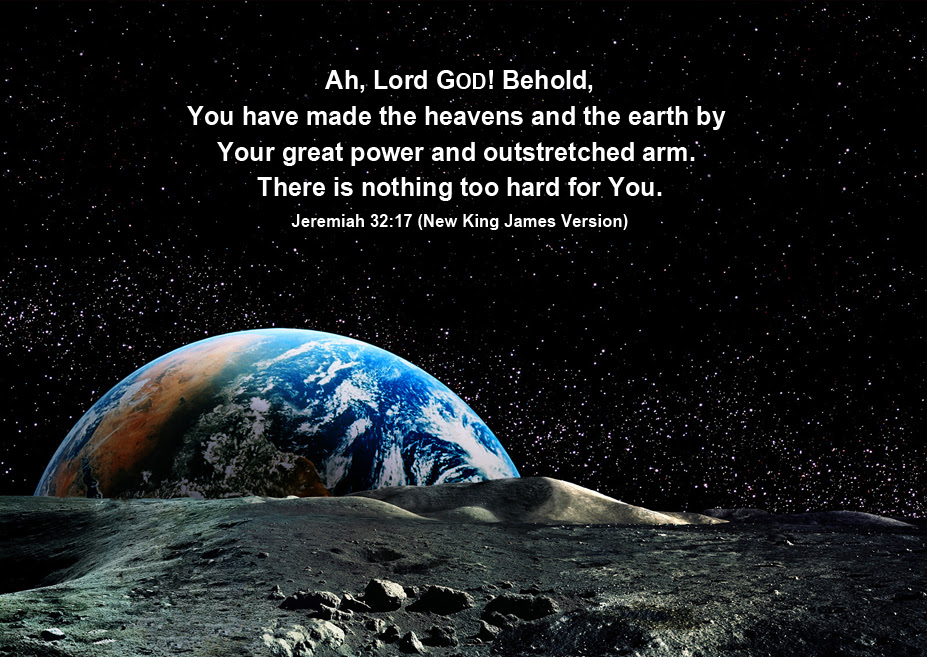 18YOU Show Love to thousands but Bring the punishment for the parents’ sins into the laps of their children after them. Great and Mighty GOD, Whose Name Is The Lord ALMIGHTY, 19 Great Are YOUR Purposes and Mighty Are YOUR Deeds. YOUR Eyes Are Open to the ways of all mankind; YOU Reward each person according to their conduct and as their deeds deserve. 20YOU Performed signs and wonders in Egypt and Have Continued them to this day, in Israel and among all mankind, and Have Gained the renown that is still YOURS. 21YOU Brought YOUR people Israel out of Egypt with signs and wonders, by a Mighty Hand and an Outstretched Arm and with Great Terror. 22YOU Gave them this land YOU Had Sworn To Give their ancestors, a land flowing with milk and honey. 23They came in and took possession of it, but they did not obey YOU or follow YOUR Law; they did not do What YOU Commanded them to do. So YOU Brought all this disaster on them.

26Then The WORD of The Lord Came to Jeremiah: 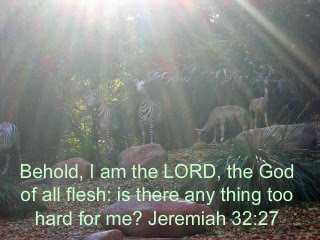 Is anything too hard for ME? 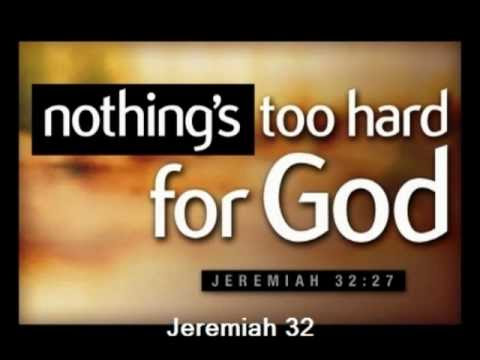 28Therefore This Is What The Lord Says: I AM About To Give this city into the hands of the Babylonians and to Nebuchadnezzar king of Babylon, who will capture it. 29The Babylonians who are attacking this city will come in and set it on fire; they will burn it down, along with the houses where the people aroused My Anger by burning incense on the roofs to Baal and by pouring out drink offerings to other gods.

33 They turned their backs to ME and not their faces; though I Taught them again and again, they would not listen or respond to discipline.

34They set up their vile images in the house that bears My Name and defiled it. 35They built high places for Baal in the Valley of Ben Hinnom to sacrifice their sons and daughters to Molek, though I never commanded—nor did it enter My Mind—that they should do such a detestable thing and so make Judah sin.

36“You are saying about this city, ‘By the sword, famine and plague it will be given into the hands of the king of Babylon’; but this is what The Lord, The God of Israel, says: 37I will surely gather them from all the lands where I banish them in My Furious Anger and Great Wrath; I Will Bring them Back to this place and Let them live in safety. 38They will be My people, and I Will Be their GOD. 39I Will Give them singleness of heart and action, so that they will always fear ME and that all will then go well for them and for their children after them. 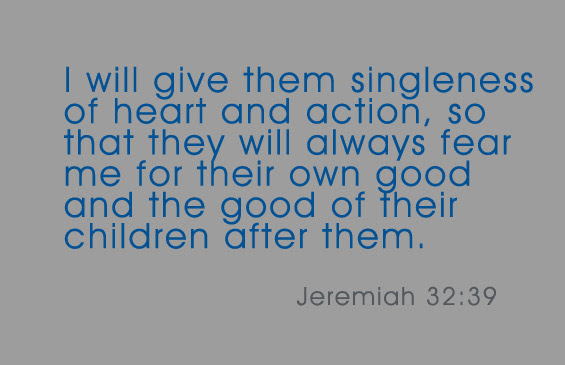 40I Will Make an Everlasting Covenant with them: I Will Never Stop Doing Good to them,

and I Will Inspire them to fear ME, so that they will never turn away from ME. 41I Will Rejoice in Doing them Good and Will Assuredly Plant them in this land with all My Heart and Soul.

42“This Is What The Lord Says: As I Have Brought all this great calamity on this people, so I Will Give them all the prosperity I Have Promised them. 43Once more fields will be bought in this land of which you say, ‘It is a desolate waste, without people or animals, for it has been given into the hands of the Babylonians.’ 44Fields will be bought for silver, and deeds will be signed, sealed and witnessed in the territory of Benjamin, in the villages around Jerusalem, in the towns of Judah and in the towns of the hill country, of the western foothills and of the Negev, Because I Will Restore their fortunes,c Declares The Lord.”

This chapter contains an account of Jeremiah's imprisonment, and the cause of it; of his buying a field of his uncle's son, and the design of it; of his prayer to GOD, and of the answer returned to him.

The time of his imprisonment, the place where, and the reasons of it, are observed in Jeremiah 32:1; that his uncle's son would come and offer the sale of a field to him was told him by The Lord, which he did accordingly, Jeremiah 32:6; of whom he bought the field, paid the money, had the purchase confirmed in a legal way, before witnesses, Jeremiah 32:8; and the writings of it he committed to Baruch, to put in an earthen vessel, where they were to continue some time as a pledge of houses, fields, and vineyards, being possessed again after the captivity, Jeremiah 32:13.

Then follows a prayer of his to The Lord, in which he addresses Him as The Maker of all things; as The Lord GOD OMNIPOTENT; as A GOD of Great Grace and Mercy, as well as strict Justice; as a GOD of Wisdom, Counsel, and Might, and an Omniscient and Righteous BEING, Jeremiah 32:16; and recounts the wonderful things HE Had Done for the people of Israel, Jeremiah 32:20; and observes the ingratitude and disobedience of that people, which were the cause of the present siege of the city, which should surely be delivered into the hands of the Chaldeans, Jeremiah 32:23.

To which prayer an answer is returned, Jeremiah 32:26; in which The Lord Describes HIMSELF As The GOD of all flesh, and as Able To Do What HE Pleases, Jeremiah 32:27; and Confirms the delivery of the city of Jerusalem unto the Chaldeans, Jeremiah 32:28; and Assigns the causes of it, the backslidings, disobedience, and dreadful idolatry of the people, Jeremiah 32:30; and, notwithstanding, promises a restoration of them to their own land again, Jeremiah 32:36; when an opportunity is taken to insert the covenant of grace, and the special articles and peculiar promises of it, for the comfort of the spiritual Israel of GOD, whether Jews or Gentiles, Jeremiah 32:38.

And the chapter is concluded with a fresh assurance of the return of the captivity, and of the punctual performance of the promise of it; when fields should be bought in every part of the land, in like manner as Jeremiah had bought his, Jeremiah 32:41.