Silver And Gold Can Never Save You From JEHOVAH'S Judgment, But JESUS' BLOOD

The End Has Come

1The WORD of The Lord Came to me: 2“Son of man, This Is What The Sovereign Lord Says to the land of Israel:

“ ‘The end! The end has come
upon the four corners of the land!
3The end is now upon you,
and I Will Unleash My Anger Against you.
I Will Judge you according to your conduct
and Repay you for all your detestable practices.
4I Will Not Look on you with pity;
I Will Not Spare you.
I Will Surely Repay you for your conduct
and for the detestable practices among you.

5“This Is What The Sovereign Lord Says:

“ ‘Disaster! Unheard-ofa disaster!
See, it comes!
6The end has come!
The end has come!
It has roused itself against you.
See, it comes!
7Doom has come upon you,
upon you who dwell in the land.
The time has come! The day is near!
There is panic, not joy, on the mountains.
8I AM About To Pour Out My Wrath On you
and Spend My Anger Against you.
I Will Judge you according to your conduct
and Repay you for all your detestable practices.
9I Will Not Look On you with pity;
I Will Not Spare you.
I Will Repay you for your conduct
and for the detestable practices among you. 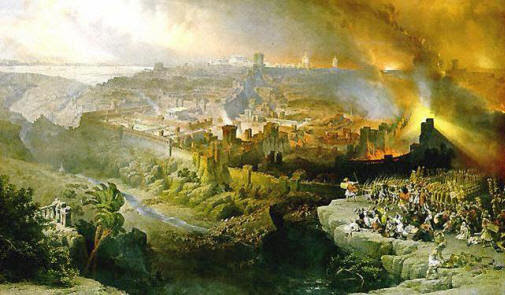 “ ‘Then you will know that It Is I The Lord Who Strikes you.

10“ ‘See, the day!
See, it comes!
Doom has burst forth,
the rod has budded,
arrogance has blossomed!
11Violence has arisen,b
a rod to punish the wicked.
None of the people will be left,
none of that crowd—
none of their wealth,
nothing of value.
12The time has come!
The day has arrived!
Let not the buyer rejoice
nor the seller grieve,
For My Wrath Is on the whole crowd.
13The seller will not recover
the property that was sold—
as long as both buyer and seller live.
For the vision concerning the whole crowd
will not be reversed.
Because of their sins, not one of them
will preserve their life.
14“ ‘They have blown the trumpet,
they have made all things ready,
but no one will go into battle,
For My Wrath Is on the whole crowd.
15Outside is the sword;
inside are plague and famine.
Those in the country
will die by the sword;
those in the city
will be devoured by famine and plague.
16The fugitives who escape
will flee to the mountains.
Like doves of the valleys,
they will all moan,
each for their own sins.
17Every hand will go limp;
every leg will be wet with urine.
18They will put on sackcloth
and be clothed with terror.
Every face will be covered with shame,
and every head will be shaved.

19“ ‘They will throw their silver into the streets,
and their gold will be treated as a thing unclean.

Their silver and gold
will not be able to deliver them
in The Day of The Lord’s Wrath.

It will not satisfy their hunger
or fill their stomachs,
for it has caused them to stumble into sin.

20They took pride in their beautiful jewelry
and used it to make their detestable idols.
They made it into vile images;
therefore I Will Make it a thing unclean for them.
21I Will Give their wealth as plunder to foreigners
and as loot to the wicked of the earth,
who will defile it.
22I Will Turn My Face Away from the people,
and robbers will desecrate The Place I Treasure.
They will enter it
and will defile it.

23“ ‘Prepare chains!
For the land is full of bloodshed,
and the city is full of violence.
24I Will Bring the most wicked of nations
to take possession of their houses.
I Will Put an end to the pride of the mighty,
and their sanctuaries will be desecrated.
25When terror comes,
they will seek peace in vain.

26Calamity upon calamity will come,
and rumor upon rumor.
They will go searching for a vision from the prophet,
priestly instruction in the Law will cease,
the counsel of the elders will come to an end.
27The king will mourn,
the prince will be clothed with despair,
and the hands of the people of the land will tremble.
I Will Deal With them according to their conduct,
and by their own standards I Will Judge them.

This chapter, which also forms a distinct prophecy, foretells the dreadful destruction of the land of Israel, or Judah, (for after the captivity of the ten tribes in the north, these terms are often used indiscriminately for the Jews in general), on account of the heinous sins of its inhabitants, Ezekiel 7:1-15; and the great distress of the small remnant that should escape, Ezekiel 7:16-19.

The Temple itself, which they had polluted with idolatry, is devoted to destruction, Ezekiel 7:20-22; and the prophet is directed to make a chain, as a type of that captivity, in which both king and people should be led in bonds to Babylon, Ezekiel 7:23-27. The whole chapter abounds in bold and beautiful figures, flowing in an easy language.