There Is No Greater Suffering Like Unto Suffering Of CHRIST 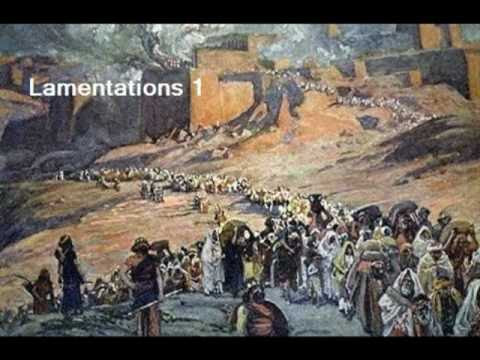 1How deserted lies the city,
once so full of people!
How like a widow is she,
who once was great among the nations!
She who was queen among the provinces
has now become a slave.

2Bitterly she weeps at night,
tears are on her cheeks. 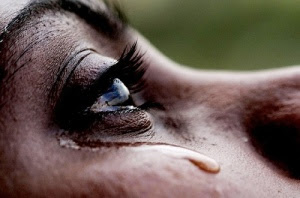 Among all her lovers
there is no one to comfort her.
All her friends have betrayed her;
they have become her enemies.
3After affliction and harsh labor,
Judah has gone into exile.
She dwells among the nations;
she finds no resting place.
All who pursue her have overtaken her
in the midst of her distress.
4The roads to Zion mourn,
for no one comes to her appointed festivals.
All her gateways are desolate,
her priests groan,
her young women grieve,
and she is in bitter anguish.
5Her foes have become her masters;
her enemies are at ease.
The Lord Has Brought her grief
because of her many sins.
Her children have gone into exile,
captive before the foe.
6All the splendor has departed
from Daughter Zion.
Her princes are like deer
that find no pasture;
in weakness they have fled
before the pursuer.
7In the days of her affliction and wandering
Jerusalem remembers all the treasures
that were hers in days of old.
When her people fell into enemy hands,
there was no one to help her.
Her enemies looked at her
and laughed at her destruction.
8Jerusalem has sinned greatly
and so has become unclean.
All who honored her despise her,
for they have all seen her naked;
she herself groans
and turns away.
9Her filthiness clung to her skirts;
she did not consider her future.
Her fall was astounding;
there was none to comfort her.
“Look, Lord, on my affliction,
for the enemy has triumphed.”
10The enemy laid hands
on all her treasures;
she saw pagan nations
enter her Sanctuary—
those you had forbidden
to enter your assembly.
11All her people groan
as they search for bread;
they barter their treasures for food
to keep themselves alive.
“Look, Lord, and Consider,
for I am despised.”
12“Is it nothing to you, all you who pass by?
Look around and see.

Is any suffering like my suffering
that was inflicted on me,
that The Lord brought on me
in the day of His fierce Anger?

13“From on high HE Sent fire,
Sent it Down into my bones.
HE Spread a net for my feet
and Turned me back.
HE Made me desolate,
faint all the day long.
14“My sins have been bound into a yokea ;
by His Hands they were woven together.
They have been hung on my neck,
and The Lord Has Sapped my strength.
HE Has Given me into the hands
of those I cannot withstand.
15“The Lord Has Rejected
all the warriors in my midst;
HE Has Summoned an army against me
tob crush my young men.
In His winepress The Lord Has Trampled
Virgin Daughter Judah.
16“This is why I weep
and my eyes overflow with tears.
No one is near to comfort me,
no one to restore my spirit.
My children are destitute
because the enemy has prevailed.”
17Zion stretches out her hands,
but there is no one to comfort her.
The Lord Has Decreed for Jacob
that his neighbors become his foes;
Jerusalem has become
an unclean thing among them.
18“The Lord Is Righteous,
yet I rebelled against His Command.
Listen, all you peoples;
look on my suffering.
My young men and young women
have gone into exile.
19“I called to my allies
but they betrayed me.
My priests and my elders
perished in the city
while they searched for food
to keep themselves alive.
20“See, Lord, how distressed I am!
I am in torment within,
and in my heart I am disturbed,
for I have been most rebellious.
Outside, the sword bereaves;
inside, there is only death.
21“People have heard my groaning,
but there is no one to comfort me.
All my enemies have heard of my distress;
they rejoice at What You Have Done.
May YOU Bring the day YOU Have Announced
so they may become like me.
22“Let all their wickedness come Before YOU;
Deal with them
as YOU Have Dealt with me
because of all my sins.
My groans are many
and my heart is faint.”

The prophecy of Jeremiah is immediately followed in the English Version by five lyric poems, the title of which in the versions is taken from the general nature of the contents; thus the Septuagint called these poems Θρῆνοι Thrēnoi, Threni, i. e. Dirges, and the Syriac and Vulgate "Lamentations." In the Hebrew Bible the "Lamentations" are arranged among the Kethubim, or (holy) writings, because of the nature of their contents: the Lamentations as being lyrical poetry are classed not with prophecies, but with the Psalms and Proverbs. This classification is probably later than the translation of the Septuagint, who have appended the Lamentations to Jeremiah's prophecy, inserting between them the apocryphal book of Baruch, and in fact counting the three as only one book. Although no name is attached to these poems in the Hebrew, yet both ancient tradition (Septuagint, Josephus, the Targum of Jonathan, the Talmud, etc.) and internal evidence point to Jeremiah as the author. The time of the composition of these poems is certainly the period immediately after the capture of Jerusalem, and probably during the month which intervened between the capture of Jerusalem and its destruction.

Their subject is the destruction of Jerusalem by the Chaldaeans. In the "first" of these poems the prophet dwells upon the miseries of hunger, of death in battle, of the profanation and plundering of the sanctuary, and of impending exile, oppressed by which the city sits solitary. In the "second," these same sufferings are described with more intense force, and in closer connection with the national sins which had caused them, and which had been aggravated by the faithlessness of the prophets. In the "third," Jeremiah acknowledges that chastisement is for the believer's good, and he dwells more upon the spiritual aspect of sorrow, and the certainty that finally there must be the redeeming of life for GOD's people, and vengeance for His enemies. In the "fourth," Judah's sorrows are confessed to have been caused by her sins. Finally, in the "fifth," Jeremiah prays that Zion's reproach may be taken away, and that YAHWEH will grant repentance unto His people, and renew their days as of old.