We Should Not Omit A Single WORD Of JESUS, The SON Of GOD

1Early in the reign of Jehoiakim son of Josiah king of Judah, This WORD Came from The Lord:

2“This Is What The Lord Says:

Stand in the courtyard of The Lord’s House and speak to all the people of the towns of Judah who come to worship in The House of The Lord. Tell them everything I Command you; Do not omit a WORD. 3Perhaps they will listen and each will turn from their evil ways. Then I Will Relent and Not Inflict on them the disaster I Was Planning because of the evil they have done. 4Say to them, ‘This Is What The Lord Says: If you do not listen to ME and follow My Law, which I Have Set before you, 5and if you do not listen to the words of My servants the prophets, whom I Have Sent to you again and again (though you have not listened), 6then I Will Make this House like Shiloh and this city a curse among all the nations of the earth.’ ”

10When the officials of Judah heard about these things, they went up from the royal palace to The House of The Lord and took their places at the entrance of the New Gate of The Lord’s House. 11Then the priests and the prophets said to the officials and all the people, “This man should be sentenced to death because he has prophesied against this city. You have heard it with your own ears!”

12Then Jeremiah said to all the officials and all the people: “The Lord sent me to prophesy against this House and this city all the things you have heard. 13Now reform your ways and your actions and obey The Lord your GOD. Then The Lord Will Relent and Not Bring the disaster HE Has Pronounced against you. 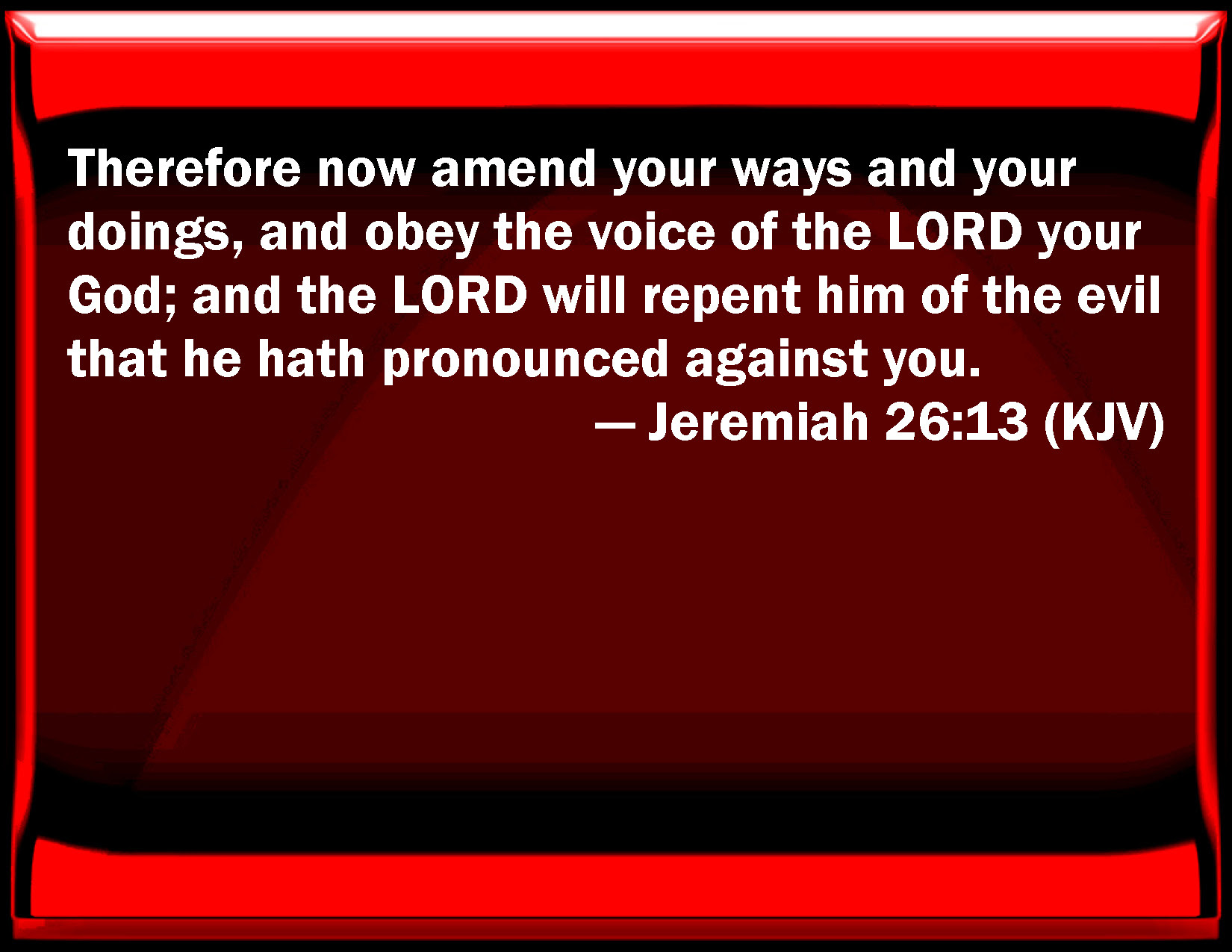 14As for me, I am in your hands; do with me whatever you think is good and right. 15Be assured, however, that if you put me to death, you will bring the guilt of innocent blood on yourselves and on this city and on those who live in it, for in truth The Lord Has Sent me to you to speak all these words in your hearing.”

16Then the officials and all the people said to the priests and the prophets, “This man should not be sentenced to death! He has spoken to us in The Name of The Lord our GOD.”

17Some of the elders of the land stepped forward and said to the entire assembly of people, 18“Micah of Moresheth prophesied in the days of Hezekiah king of Judah. He told all the people of Judah,

‘This Is What The Lord ALMIGHTY Says:

“ ‘Zion will be plowed like a field,
Jerusalem will become a heap of rubble,
The Temple hill a mound overgrown with thickets.’b

19“Did Hezekiah king of Judah or anyone else in Judah put him to death? Did not Hezekiah fear The Lord and seek His Favor? And Did Not The Lord Relent, so that HE Did Not Bring the disaster HE Pronounced against them? We are about to bring a terrible disaster on ourselves!”

20(Now Uriah son of Shemaiah from Kiriath Jearim was another man who prophesied in The Name of The Lord; he prophesied the same things against this city and this land as Jeremiah did. 21When King Jehoiakim and all his officers and officials heard his words, the king was determined to put him to death. But Uriah heard of it and fled in fear to Egypt.

22King Jehoiakim, however, sent Elnathan son of Akbor to Egypt, along with some other men. 23They brought Uriah out of Egypt and took him to King Jehoiakim, who had him struck down with a sword and his body thrown into the burial place of the common people.)

24Furthermore, Ahikam son of Shaphan supported Jeremiah, and so he was not handed over to the people to be put to death.

This happened about 588 B.C., two years before Jerusalem fell into the hand of the Babylonian king.

Jeremiah, by the Commend of GOD, goes into the court of The Lord's House; and foretells the destruction of The Temple and city, if not prevented by the speedy repentance of the people, Jeremiah 26:1-7. By this unwelcome prophecy his life was in great danger; although saved by the influence of Ahikam, the son of Shaphan, who makes a masterly defense for the prophet, Jeremiah 26:8-18. Urijah is condemned, but escapes to Egypt; whence he is brought back by Jehoiakim, and slain, Jeremiah 26:20-23. Ahikam befriends Jeremiah, Jeremiah 26:24.