JESUS Teaches, Proclaims And Heals Now By HIS SPIRIT

23JESUS Went throughout Galilee, Teaching in their synagogues,

Proclaiming the Good News of The Kingdom,

and Healing every disease and sickness among the people. 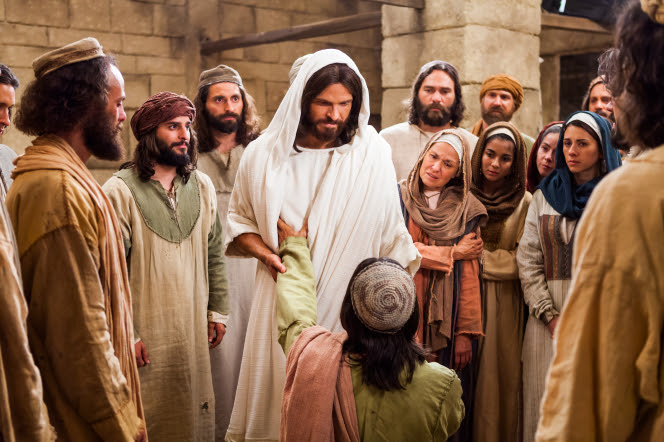 24News about Him spread all over Syria, and people brought to Him all who were ill with various diseases, those suffering severe pain, the demon-possessed, those having seizures, and the paralyzed; and HE Healed them.

25Large crowds from Galilee, the Decapolis, Jerusalem, Judea and the region across the Jordan followed him.

Synagogue, συναγωγη(synagoge), from συν(syn), together, and αγω(ago), I bring, a public assembly of persons, or the place where such persons publicly assembled. Synagogues, among the Jews, were not probably older than the return from the Babylonian captivity. The synagogue was governed by a council or assembly, over whom was a president, called in The Gospels, the ruler of the synagogue. These are sometimes called chiefs of the Jews, the rulers, the priests or elders, the governors, the overseers, the fathers of the synagogue. Service was performed in them three times a day - morning, afternoon, and night. Synagogue, among the Jews, had often the same meaning as congregation among the Christians.

The synagogues were built in imitation of The Temple, with a center building, supported by pillars, and a court surrounding it. See the notes at Matthew 21:12. In the center building, or chapel, was a place prepared for the reading of the Law. The Law was kept in a chest, or ark, near to the pulpit. The uppermost seats Matthew 23:6 were those nearest to the pulpit. The people sat around, facing the pulpit. When the Law was read, the officiating person rose; when it was expounded, he was seated. Our Savior imitated their example, and was commonly seated in addressing the people, Matthew 5:1; Matthew 13:1.

HE Also Preached to them the things concerning The Kingdom of Heaven; as that except a man be born again, he cannot see it; and unless he has a better righteousness than his own, he cannot enter into it.

What A Powerful Physician CHRIST Was! HE Went About not only Teaching, but Healing, and both with His WORD. GOD Sent His WORD, and Healed them. HE Healed all manner of sickness, and all manner of disease without exception.