The Power Of JESUS' BLOOD

1Now the Passover and the Festival of Unleavened Bread were only two days away, and the chief priests and the teachers of the Law were scheming to arrest JESUS secretly and kill Him. 2“But not during the festival,” they said, “or the people may riot.”

3While HE Was in Bethany, Reclining at the table in the home of Simon the Leper, a woman came with an alabaster jar of very expensive perfume, made of pure nard. She broke the jar and poured the perfume on His Head.

4Some of those present were saying indignantly to one another, “Why this waste of perfume? 5It could have been sold for more than a year’s wagesa and the money given to the poor.” And they rebuked her harshly.

6“Leave her alone,” Said JESUS. “Why are you bothering her? She has done a beautiful thing to ME. 7The poor you will always have with you, and you can help them any time you want. But you will not always have ME. 8She did what she could. She poured perfume on My Body beforehand to prepare for My Burial. 9Truly I tell you, wherever The Gospel is preached throughout the world, what she has done will also be told, in memory of her.”

10Then Judas Iscariot, one of the Twelve, went to the chief priests to betray JESUS to them. 11They were delighted to hear this and promised to give him money. So he watched for an opportunity to hand Him over. 12On the first day of the Festival of Unleavened Bread, when it was customary to sacrifice the Passover lamb, JESUS’ disciples asked Him, “Where do you want us to go and make preparations for you to eat the Passover?”

13So HE Sent two of his disciples, Telling them, “Go into the city, and a man carrying a jar of water will meet you. Follow him. 14Say to the owner of the house he enters, ‘The Teacher Asks: Where Is My Guest Room, Where I May Eat the Passover with My disciples?’ 15He will show you a large room upstairs, furnished and ready. Make preparations for us there.”

16The disciples left, went into the city and found things Just As JESUS Had Told them. So they prepared the Passover.

17When evening came, JESUS Arrived with the Twelve. 18While they were reclining at the table eating, HE Said, “Truly I tell you, one of you will betray ME—one who is eating with ME.”

19They were saddened, and one by one they said to Him, “Surely you don’t mean me?”

20“It is one of the Twelve,” HE Replied, “one who dips bread into the bowl with ME. 21The SON of Man Will Go just as it is written about Him. But woe to that man who betrays The SON of Man! It would be better for him if he had not been born.” 22While they were eating, JESUS Took Bread, and When HE Had Given Thanks, HE Broke it and Gave it to His disciples, Saying, 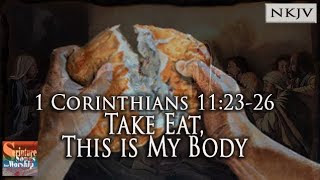 23Then HE Took a cup, and When HE Had Given Thanks, HE Gave it to them, and they all drank from it.

24 “This Is My Blood of The Covenant, Which Is Poured Out For Many,”

HE Said to them.

25 “Truly I Tell you, I Will Not Drink again from the fruit of the vine until that Day When I Drink It New in The Kingdom of GOD.”

26When they had sung a hymn, they went out to the Mount of Olives. 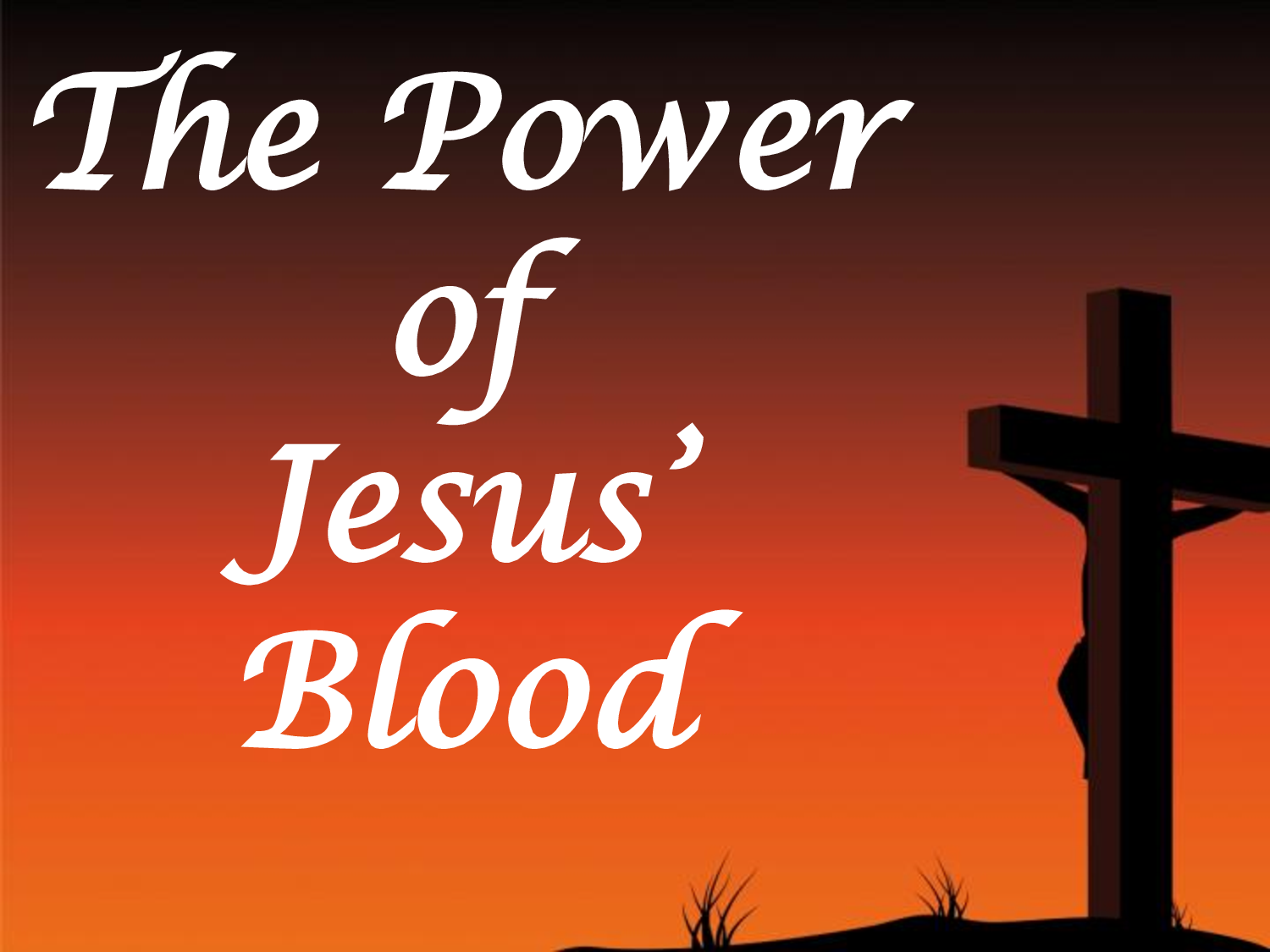 JESUS Took bread, Blessed and Broke it: When the bread was lifted up at Passover, the head of the meal would say: “This is the bread of affliction which our fathers ate in the land of Egypt. Let everyone who hungers come and eat; let everyone who is needy come and eat the Passover meal.” Everything eaten at the Passover meal had a symbolic meaning. The bitter herbs recalled the bitterness of slavery; the salt water remembered the tears shed under Egypt’s oppression. The main course of the meal - a lamb freshly sacrificed for that particular household - did not symbolize anything connected to the agonies of Egypt. It was the sin-bearing sacrifice that allowed the Judgment of GOD to pass over the household that believed.

Take, Eat; This Is My Body . This is the Blood of the New Covenant: JESUS Didn’t Give the normal explanation of the meaning of each of the foods. HE Reinterpreted them in Himself, and the focus was no longer on the suffering of Israel in Egypt, but on the Sin-Bearing Suffering of JESUS on their behalf.

Christians have debated for centuries about the true nature of the bread and the cup at this supper.

The Roman Catholic Church holds the idea of transubstantiation, which teaches that the bread and the wine actually become the Body and Blood of JESUS.

Martin Luther held the idea of consubstantiation, which teaches the bread remains bread and the wine remains wine, but by faith they are the same as JESUS’ actual Body. Luther did not believe in the Roman Catholic doctrine of transubstantiation, but he did not go far from it.

John Calvin taught that JESUS’ Presence in the bread and wine was real, but only spiritual, not physical. Zwingli taught that the bread and wine are mere symbols that represent the Body and Blood of JESUS. When the Swiss Reformers debated the issue with Martin Luther at Marburg, there was a huge contention. Luther insisted on some kind of physical presence because JESUS Said “This Is My Body.” He insisted over and over again, writing it on the velvet of the table, Hoc est corpus meum - “this is My body” in Latin. Zwingli replied that JESUS also Said “I AM the Vine,” and “I AM the Door,” but we understand what HE said. Luther answered, “I don’t know, but if CHRIST Told me to eat dung I would do it knowing that it was good for me.” Luther was so strong on this because he saw it as an issue of believing JESUS’ WORDS, and because he thought Zwingli compromised on this point, he said Zwingli was of another spirit (andere geist). Ironically, later Luther later read Calvin’s writings on the Lord’s Supper (which were essentially the same as Zwingli’s) and seemed to agree with Calvin’s views.

According to Scripture, we can understand that the bread and the cup are not mere symbols, but they are powerful pictures to partake of - to enter in to - as we see the Lord’s Table as the new Passover.

Take, eat: We can’t get so caught up in discovering what the bread and the cup mean that we forget to do what JESUS Said to do with them. We must take and eat.

Take means that it won’t be forced upon you. You have to receive it.

Eat means that this is absolutely vital for you. Without food and drink, we perish. Without JESUS, we perish. It also means that you must take JESUS into your innermost being.

Beyond all the controversy about what the elements of this supper really are and what they really mean, the announcement that JESUS Brings a new covenant stands out.

Until that day when I drink it new in the kingdom of GOD: JESUS Has Not Yet Celebrated a Passover in Heaven. HE Is Waiting for all His people to be gathered to Him and then there will be a great supper - the Marriage Supper of The Lamb (Revelation 19:9). This is the fulfillment in The Kingdom of GOD JESUS Longed For.

“There is no Lord’s Supper in Heaven, for there it is ‘fulfilled’ in the Marriage-Feast of The Lamb.” (Cole)