JESUS Says To Lazarus, “Come Out!”

The Death of Lazarus

1Now a man named Lazarus was sick. He was from Bethany, the village of Mary and her sister Martha.2(This Mary, whose brother Lazarus now lay sick, was the same one who poured perfume on The Lord and wiped His Feet with her hair.) 3So the sisters sent word to JESUS, “Lord, the one YOU Love is sick.”

4When HE Heard this, JESUS Said,

“This sickness will not end in death. No, It Is for GOD’s Glory so that GOD’s SON May Be Glorified through it.”

5Now JESUS Loved Martha and her sister and Lazarus. 6So when HE Heard that Lazarus was sick, HE Stayed Where HE Was two more days, 7And then HE Said to His disciples,

8“But Rabbi,” they said, “a short while ago the Jews there tried to stone YOU, and yet YOU are going back?”

11After HE Had Said this, HE Went On To Tell them,


“Our friend Lazarus has fallen asleep; but I AM Going there to Wake him Up.”

12His disciples replied, “Lord, if he sleeps, he will get better.” 13JESUS Had Been Speaking of his death, but His disciples thought HE Meant natural sleep.

14So then HE Told them plainly,

“Lazarus is dead, 15and for your sake I AM Glad I Was not there, so that you may believe. But let us go to him.”

16Then Thomas (also known as Didymusa ) said to the rest of the disciples, “Let us also go, that we may die with Him.”

JESUS Comforts the Sisters of Lazarus

17On His Arrival, JESUS Found that Lazarus had already been in the tomb for four days. 18Now Bethany was less than two milesb from Jerusalem, 19and many Jews had come to Martha and Mary to comfort them in the loss of their brother. 20When Martha heard that JESUS Was Coming, she went out to meet Him, but Mary stayed at home.

21“Lord,” Martha said to Jesus, “If You Had Been here, my brother would not have died. 22But I know that even now GOD Will Give YOU whatever YOU Ask.”

23JESUS said to her,

“Your brother will rise again.”

24Martha answered, “I know he will rise again in the resurrection at the last day.”

25JESUS Said to her,

“I AM The Resurrection and The Life. The one who believes in ME will live, even though they die; 26and whoever lives by believing in ME will never die. Do you believe this?”

“I believe that YOU Are The MESSIAH, The SON of GOD, Who Is To Come into the world.”

28After she had said this, she went back and called her sister Mary aside. “The Teacher Is Here,” she said, “and Is Asking For you.” 29When Mary heard this, she got up quickly and went to Him. 30Now JESUS Had Not yet Entered the village, but Was still at the place where Martha had met Him. 31When the Jews who had been with Mary in the house, comforting her, noticed how quickly she got up and went out, they followed her, supposing she was going to the tomb to mourn there.

32When Mary reached the place where JESUS Was and saw Him, she fell at His Feet and said, “Lord, If You Had Been here, my brother would not have died.”

33When JESUS Saw her weeping, and the Jews who had come along with her also weeping, HE Was deeply Moved in spirit and troubled. 34“Where have you laid him?” HE Asked.

“Come and see, Lord,” they replied. 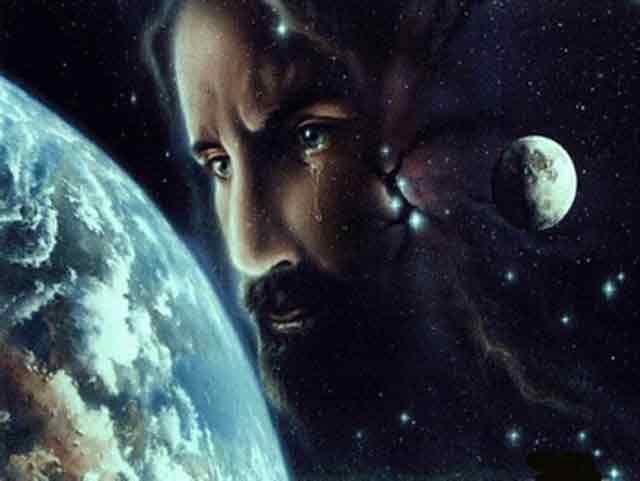 37But some of them said, “Could Not HE Who Opened the eyes of the blind man Have Kept this man from dying?”

Jesus Raises Lazarus From the Dead

38JESUS, once more deeply Moved, Came to the tomb. It was a cave with a stone laid across the entrance. 39 “Take away the stone,” HE Said.

“But, Lord,” said Martha, the sister of the dead man, “by this time there is a bad odor, for HE Has Been there four days.”

“Did I Not Tell you that if you believe, you will see The Glory of GOD?” 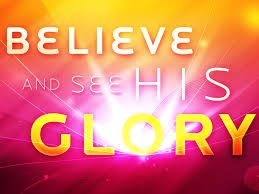 41So they took away the stone. Then JESUS Looked Up and Said,

“FATHER, I Thank YOU That YOU Have Heard ME. 42I Knew that YOU Always Hear ME, but I Said this for the benefit of the people standing here, that they may believe that YOU Sent ME.”

43When HE Had Said this, JESUS Called in a loud voice, 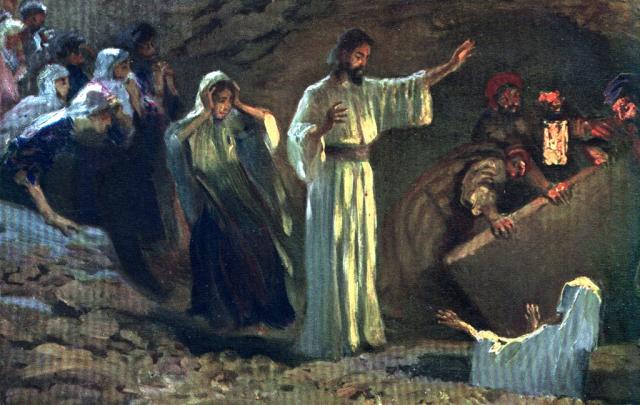 44The dead man came out, 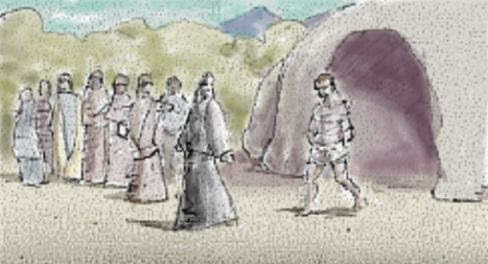 his hands and feet wrapped with strips of linen, and a cloth around his face. 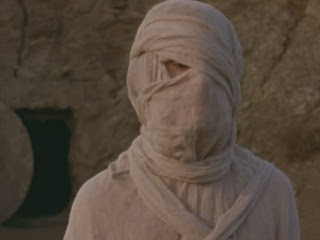 
“Take off the grave clothes and let him go.”

The Plot to Kill JESUS


45Therefore many of the Jews who had come to visit Mary, and had seen What JESUS Did, believed in Him.46But some of them went to the Pharisees and told them What JESUS Had Done. 47Then the chief priests and the Pharisees called a meeting of the Sanhedrin.

“What are we accomplishing?” they asked. “Here Is This Man Performing many signs. 48If we let Him Go On like this, everyone will believe in Him, and then the Romans will come and take away both our Temple and our nation.”

49Then one of them, named Caiaphas, who was high priest that year, spoke up, “You know nothing at all!50 You do not realize that it is better for you that one man die for the people than that the whole nation perish.”

51He did not say this on his own, but as high priest that year he prophesied that JESUS Would Die For the Jewish nation, 52and not only for that nation but also for the scattered children of GOD, To Bring them together and Make them one. 53So from that day on they plotted to take His Life.

54Therefore JESUS no longer Moved About publicly among the people of Judea. Instead HE Withdrew to a region near the wilderness, to a village called Ephraim, where HE Stayed with His disciples.

55When it was almost time for the Jewish Passover, many went up from the country to Jerusalem for their ceremonial cleansing before the Passover. 56They kept looking for JESUS, and as they stood in the Temple courts they asked one another, “What do you think? Isn’t HE Coming to the festival at all?” 57But the chief priests and the Pharisees had given orders that anyone who found out where JESUS Was should report it so that they might arrest Him.