JESUS Comes Again From Heaven With The Trumpet Sound Of GOD

1The LORD Said To Moses:


2“Make two trumpets of hammered silver, and use them for calling the community together and for having the camps set out. 3When both are sounded, the whole community is to assemble before you at the entrance to the tent of meeting. 4If only one is sounded, the leaders—the heads of the clans of Israel—are to assemble before you. 5When a trumpet blast is sounded, the tribes camping on the east are to set out. 6At the sounding of a second blast, the camps on the south are to set out. The blast will be the signal for setting out. 7To gather the assembly, blow the trumpets, but not with the signal for setting out.

8“The sons of Aaron, the priests, are to blow the trumpets. This is to be a lasting ordinance for you and the generations to come. 9When you go into battle in your own land against an enemy who is oppressing you, sound a blast on the trumpets. Then you will be remembered By The LORD your GOD and rescued from your enemies. 10 Also at your times of rejoicing—your appointed festivals and New Moon feasts—you are to sound the trumpets over your burnt offerings and fellowship offerings, and they will be a memorial for you before your GOD.

11On the twentieth day of the second month of the second year, the cloud lifted from above the Tabernacle of the Covenant Law. 12Then the Israelites set out from the Desert of Sinai and traveled from place to place until the cloud came to rest in the Desert of Paran. 13They set out, this first time, at The LORD'S Command through Moses. 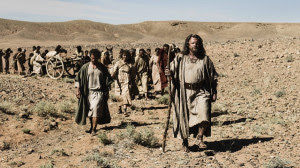 29Now Moses said to Hobab son of Reuel the Midianite, Moses’ father-in-law, “We are setting out for the place about which


Come with us and we will treat you well,

For The LORD Has Promised good things to Israel.”

31But Moses said, “Please do not leave us. You know where we should camp in the wilderness, and you can be our eyes. 32If you come with us, we will share with you whatever good things The LORD Gives us.”

35Whenever the Ark Set Out, Moses said,

“Rise Up, LORD!
May YOUR enemies be scattered;
May YOUR foes flee Before YOU.”

36Whenever it came to rest, he said,

“Return, LORD,
to the countless thousands of Israel.”

Here are directions concerning the public notices to be given the people by sound of trumpet. Their laws in every case were to be Divine, therefore, even in this matter Moses is directed. These trumpets typify the preached Gospel. It sounds an alarm to sinners, calls them to repent, proclaims liberty to the captives and slaves of Satan, and collects the worshipers of GOD. It directs and encourages their heavenly journey; stirs them up to combat against the world and sin, encouraging them with the assurance of victory. It leads their attention to the Sacrifice of CHRIST, and shows The LORD'S Presence for their protection.

It is also necessary that the Gospel trumpet give a distinct sound, according to the persons addressed, or the end proposed; whether to convince, humble, console, exhort, reprove, or teach. The sounding of the trumpet of the Gospel is GOD'S Ordinance, and demands the attention of all to whom it is sent.

After the Israelites had continued nearly a year at Mount Sinai, and all was settled respecting their future worship, they began their march to Canaan. True religion begins with the knowledge of the Holy Law of GOD, and humiliation for sin, but we must go on towards perfection, in acquaintance With CHRIST and His Gospel, and those effectual encouragements, motives, and assistances to holiness, which it proposes.

They took their journey according to the Commandment of The LORD, Deuteronpomy 1:6-8, and as the cloud led them. Those who give themselves to the direction of GOD's WORD and SPIRIT, steer a steady course, even when they seem bewildered. While they are sure they cannot lose their GOD and Guide, they do not need to fear losing their way. They went out of the wilderness of Sinai, and rested in the wilderness of Paran. All our removes in this world are but from one wilderness to another. We shall never be at rest, never at home, till we come to heaven, but all will be well there.

Moses invites his kindred to go to Canaan. Those who are bound for the heavenly Canaan, should ask and encourage their friends to go with them.  We shall have the joys of heaven, for others coming to share with us. It is good having fellowship with those who have fellowship with GOD. But the things of this world, which are seen, draw strongly from the pursuit of the things of the other world, which are not seen. Moses urges that Hobab, his father-in-law might be serviceable to them. Not to show where they must encamp, nor what way they must march, the cloud was to direct that; but to show the conveniences of the place they marched through, and encamped in. It well consists with our trust In GOD's Providence, to use the help of our friends.

Their going out and coming in, gives an example to us to begin and end every day's journey and every day's work with prayer. Here is Moses's prayer when the ark set forward, Rise up, and let thine enemies be scattered. There are those in the world who are enemies to GOD and haters of him; secret and open enemies; enemies to his truths, his laws, his ordinances, his people. But for the scattering and defeating of GOD's enemies, there needs no more than GOD's Arising. Observe also the prayer of Moses when the Ark rested, that GOD Would Cause HIS people to rest. The welfare and happiness of the Israel of GOD, consist in the continual Presence of GOD Among them. Their safety is not in their numbers, but in the Favor of GOD, and His Gracious Return to them, and Resting With them.

On this account, How happy you are, O people of JEHOVAH GOD! who is like YOU! HE WILL Go Before them, To Find them resting-places by the way. His Promise is, and their prayers are, that HE WILL Never Leave them nor Forsake them.