Rahab Tied The Scarlet Cord In The Window

Rahab and the Spies


1Then Joshua son of Nun secretly sent two spies from Shittim. “Go, look over the land,” he said, “especially Jericho.” So they went and entered the house of a prostitute named Rahab and stayed there.

4But the woman had taken the two men and hidden them. She said, “Yes, the men came to me, but I did not know where they had come from. 5At dusk, when it was time to close the city gate, they left. I don’t know which way they went. Go after them quickly. You may catch up with them.” 6(But she had taken them up to the roof and hidden them under the stalks of flax she had laid out on the roof.) 7So the men set out in pursuit of the spies on the road that leads to the fords of the Jordan, and as soon as the pursuers had gone out, the gate was shut.

8Before the spies lay down for the night, she went up on the roof 9and said to them, “I know that The LORD Has Given you this land and that a great fear of you has fallen on us, so that all who live in this country are melting in fear because of you. 10We have heard How The LORD Dried Up the water of the Red Seaa for you when you came out of Egypt, and what you did to Sihon and Og, the two kings of the Amorites east of the Jordan, whom you completely destroyed.b 11When we heard of it, our hearts melted in fear and everyone’s courage failed because of you, for

The LORD your GOD Is GOD in Heaven above and on the earth below.

12“Now then, please swear to me By The LORD that you will show kindness to my family, because I have shown kindness to you. Give me a sure sign 13that you will spare the lives of my father and mother, my brothers and sisters, and all who belong to them—and that you will save us from death.”

14“Our lives for your lives!” the men assured her. “If you don’t tell what we are doing, we will treat you kindly and faithfully When The LORD Gives us the land.”

15So she let them down by a rope through the window, for the house she lived in was part of the city wall. 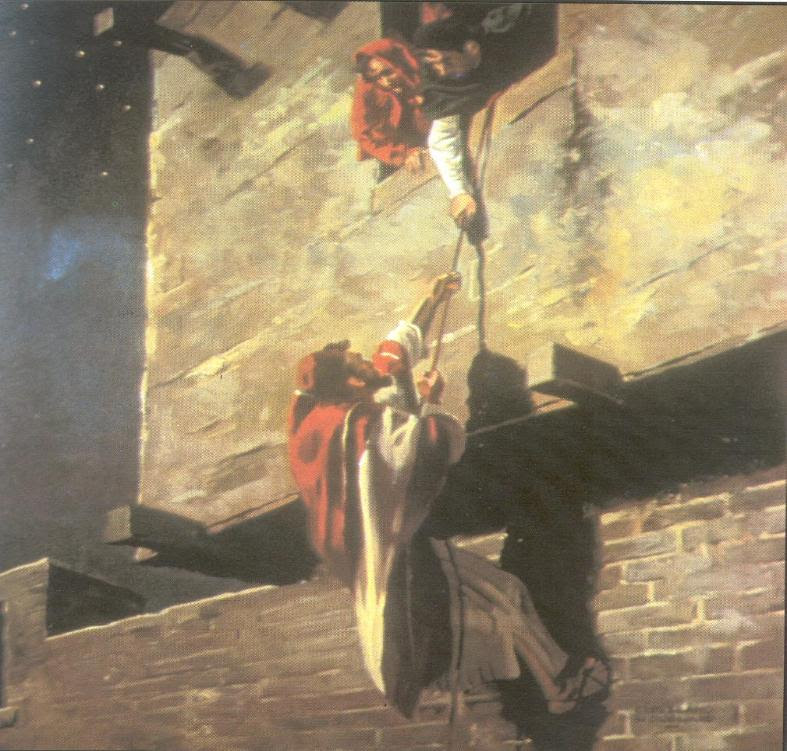 16She said to them, “Go to the hills so the pursuers will not find you. Hide yourselves there three days until they return, and then go on your way.”

17Now the men had said to her, “This oath you made us swear will not be binding on us 18unless, when we enter the land, you have tied this scarlet cord in the window through which you let us down, and unless you have brought your father and mother, your brothers and all your family into your house. 19If any of them go outside your house into the street, their blood will be on their own heads; we will not be responsible. As for those who are in the house with you, their blood will be on our head if a hand is laid on them. 20But if you tell what we are doing, we will be released from the oath you made us swear.”

So she sent them away, and they departed.

And she tied the scarlet cord in the window. 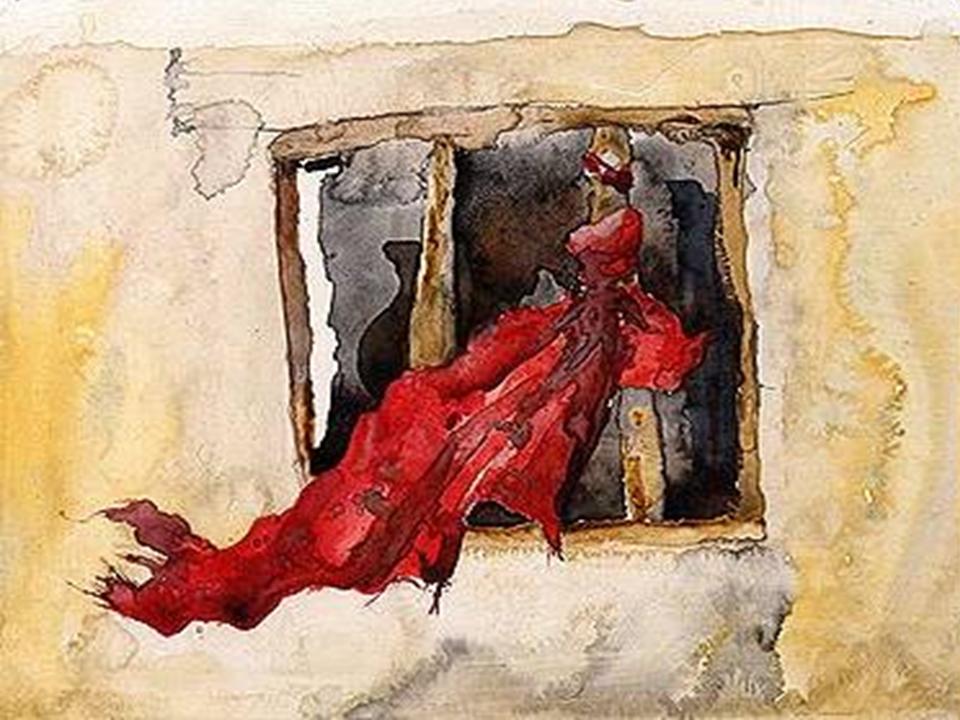 22When they left, they went into the hills and stayed there three days, until the pursuers had searched all along the road and returned without finding them. 23Then the two men started back. They went down out of the hills, forded the river and came to Joshua son of Nun and told him everything that had happened to them. 24They said to Joshua, “The LORD Has Surely Given the whole land into our hands; all the people are melting in fear because of us.”

Joshua sends out two spies to examine the state of the inhabitants of the land, particularly those of Jericho, who are entertained at the house of Rahab, Joshua 2:1. The king of Jericho is informed of their being in the town, and sends to Rahab, commanding her to deliver them up, Joshua 2:2, Joshua 2:3. She hides the spies, and tells the messengers that the men were departed and gone towards the mountain, Joshua 2:4, Joshua 2:5. When the officers of the king of Jericho were departed, she took the spies to the house-top, and covered them with flax, Joshua 2:6, Joshua 2:7. She relates to them that the fear of the Israelites had fallen on all the inhabitants of the country on hearing of their victories over the Amorites; that she knew none could resist The GOD of Israel, and therefore desired them to give her an oath that, when they took Jericho, they would preserve the lives of her and her family, Joshua 2:8-13. The spies swear to her, Joshua 2:14. She lets them down by a cord from the house-top, and gives them directions how to proceed, in order to avoid the pursuers, Joshua 2:15, Joshua 2:16. She is to tie a scarlet line to the window, through which she had let them down, which should be the sign to the Israelites to spare that house and its inhabitants, Joshua 2:17-19. Having bound her to secrecy, they depart, Joshua 2:20, Joshua 2:21. After three days' stay in the mountain, they return to Joshua, and make a favorable report, Joshua 2:22-24.

An harlot's house - "The house of a woman, an innkeeper," cannot be maintained. Rahab must remain an example under the Law similar to that Luke 7:37 under the Gospel, of "a woman that was a sinner," yet, because of her faith, not only pardoned, but exalted to the highest honor.

Rahab was admitted among the people of GOD; she intermarried into a chief family of a chief tribe, and found a place among the best remembered ancestors of King David and of CHRIST; thus receiving the temporal blessings of the covenant in largest measure. The spies would of course find such a house in Jericho as they could visit without exciting suspicion; and the situation of Rahab's upon the wall Joshua 2:15, rendered it especially suitable for them to flee in case of emergency.

It appears from Joshua 2:4 that Rahab hid them before the King's messengers reached her house, and probably as soon as the spies had come to her house to entrust themselves to her care. Rahab (i. e. "spacious," "wide.") is regarded as a type of the Christian Church, which was gathered out of converts from the whole circle of pagan nations.


This line of scarlet cord - תקות חוט השני tikvath chut hashshani. Probably this may mean, this piece of scarlet cloth, or, this cloth (made) of scarlet thread. When the Israelites took the city this piece of red cloth seems to have been hung out of the window by way of flag; and this was the sign on which she and the spies had agreed.

Now let’s consider why Christians are impressed with the scarlet cord in the window. It forces itself upon us in the light of Scriptural teaching about the Blood of CHRIST. Red blood from slain lambs splashed over the doorposts of Israelite homes in Egypt protected them from the “slayer of the firstborn” (Exodus 12:13).

The scarlet cord symbolized in type Rahab’s acceptance of the “LAMB'S Blood” in her life. What the blood on the doorposts on the first Passover night in Egypt was to the houses of Israel, so the scarlet cord in the window was to the house of Rahab. It became Rahab’s identification as one to be saved in a day of calamity. It was the acting out of her faith. Her sinful years overlooked (Acts 17:30-31) and she became the ancestress of David and of JESUS CHRIST (Matthew 1:1, 5-6).

What the blood of the first Passover did for the Israelites, the scarlet cord did for Rahab. What CHRIST’s Poured-Out Blood on the stake did for mankind’s sins, the red wine each Passover similarly symbolizes for believers. Christians celebrate deliverance from the bondage of sin. Despite human weakness, GOD Views cleansed believers as unleavened (1 Corinthians 5:7).

With that confidence we march on, as did the Israelites, towards the Promised Land.