In The Book Of Esther, JEHOVAH'S Providence Is Distinctly Visible

1So the king and Haman went to Queen Esther’s banquet, 2and as they were drinking wine on the second day, the king again asked, “Queen Esther, what is your petition? It will be given you. What is your request? Even up to half the kingdom, it will be granted.”

3Then Queen Esther answered, “If I have found favor with you, Your Majesty, and if it pleases you, grant me my life—this is my petition. And spare my people—this is my request. 4For I and my people have been sold to be destroyed, killed and annihilated. If we had merely been sold as male and female slaves, I would have kept quiet, because no such distress would justify disturbing the king.a ”

5King Xerxes asked Queen Esther, “Who is he? Where is he—the man who has dared to do such a thing?”

6Esther said, “An adversary and enemy! This vile Haman!” 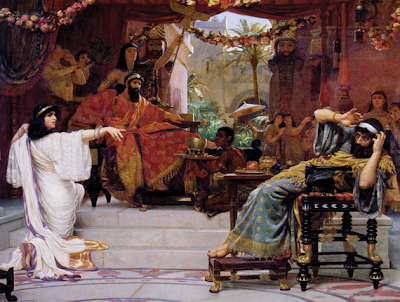 Then Haman was terrified before the king and queen. 7The king got up in a rage, left his wine and went out into the palace garden. But Haman, realizing that the king had already decided his fate, stayed behind to beg Queen Esther for his life.

8Just as the king returned from the palace garden to the banquet hall, Haman was falling on the couch where Esther was reclining.

The king exclaimed, “Will he even molest the queen while she is with me in the house?”

As soon as the word left the king’s mouth, they covered Haman’s face.

9Then Harbona, one of the eunuchs attending the king, said, “A pole reaching to a height of fifty cubitsb stands by Haman’s house. He had it set up for Mordecai, who spoke up to help the king.”

The king said, “Impale him on it!”

10So they impaled Haman on the pole he had set up for Mordecai. 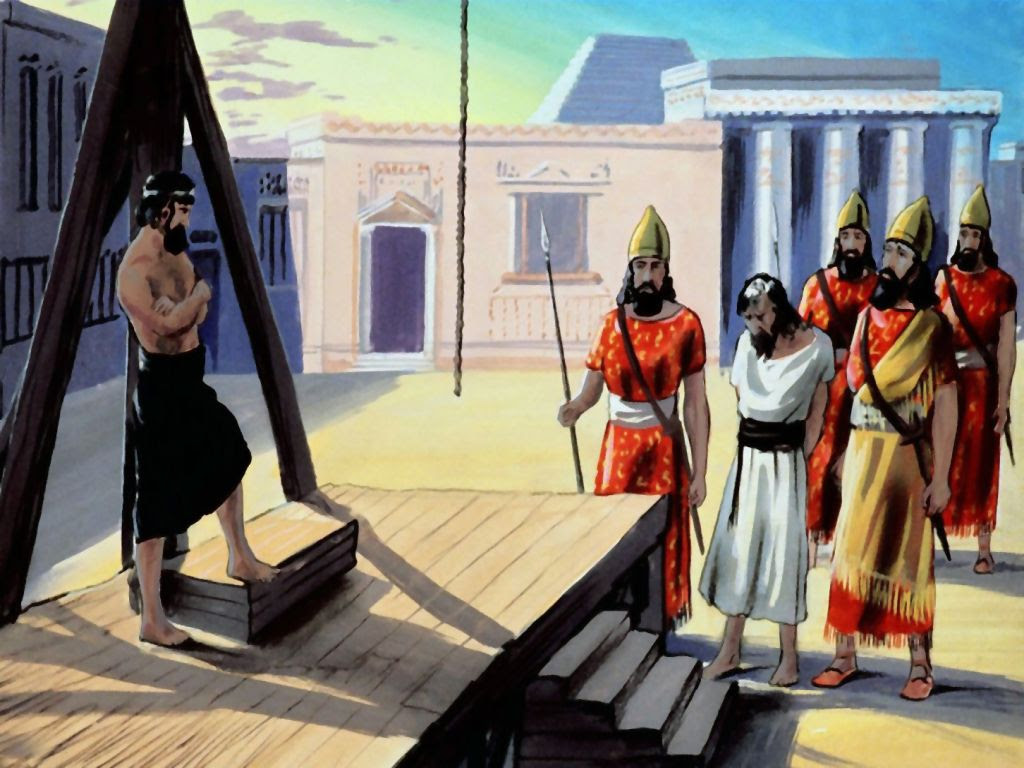 Then the king’s fury subsided.

The king commanded to bring the book of records of the chronicles—In Eastern courts, there are scribes or officers whose duty it is to keep a journal of every occurrence worthy of notice. A book of this kind, abounding with anecdotes, is full of interest. It has been a custom with Eastern kings, in all ages, frequently to cause the annals of the kingdom to be read to them.

It is resorted to, not merely as a pastime to while away the tedium of an hour, but as a source of instruction to the monarch, by reviewing the important incidents of his own life, as well as those of his ancestors. There was, therefore, nothing uncommon in this Persian monarch calling for the court journal. But, in his being unable to sleep at that particular juncture, in his ordering the book then to be read to him, and in his attention having been specially directed to the important and as yet unrewarded services of Mordecai, the immediate interposition of GOD’s Providence is distinctly visible.

We are sold, I and my people, to be destroyed - That is, by the cruel scheme of that man, who offered an immense sum of money to purchase our extermination. Esther dwelt on his contemplated atrocity, in a variety of expressions, which both evinced the depth of her own emotions, and were intended to awaken similar feelings in the king's mind.

But if we had been sold for bondmen and bondwomen, I had held my tongue - Though a great calamity to the Jews, the enslavement of that people might have enriched the national treasury; and, at all events, the policy, if found from experience to be bad, could be altered. But the destruction of such a body of people would be an irreparable evil, and all the talents Haman might pour into the treasury could not compensate for the loss of their services.

The King Causes Haman to Be Hanged on His Own Gallows

Haman saw that there was evil determined against him by the king - When the king of Persia orders an offender to be executed, and then rises and goes into the women's apartment, it is a sign that no mercy is to be hoped for. Even the sudden rising of the king in anger was the same as if he had pronounced sentence.

Haman was fallen upon the bed whereon Esther was - We do not know the precise form of the couches on which the Persians reclined at table. But it is probable that they were not very different from those used by the Greeks and Romans. Haman, perhaps, at first stood up to beg pardon of Esther; but driven in his extremity to resort to an attitude of the most earnest supplication, he fell prostrate on the couch where the queen was reclining. The king returning that instant was fired at what seemed an outrage on female modesty.

They covered Haman's face - The import of this striking action is, that a criminal is unworthy any longer to look on the face of the king, and hence, when malefactors are consigned to their doom in Persia, the first thing is to cover the face with a veil or napkin.

Harbonah, one of the eunuchs, said before the king, Behold also, the gallows - This eunuch had probably been the messenger sent with the invitation to Haman, and on that occasion had seen the gallows. The information he now volunteered, as well it may be from abhorrence of Haman's cold-blooded conspiracy as from sympathy with his amiable mistress, involved with her people in imminent peril.

So they hanged Haman on the gallows that he had prepared for Mordecai - He has not been the only plotter of mischief whose feet have been taken in the net which they hid.

The nations have fallen into the pit they have dug; their feet are caught in the net they have hidden.


But never was condemnation more just, and retribution more merited, than the execution of that gigantic criminal.