1“But now they mock me,
men younger than I,
whose fathers I would have disdained
to put with my sheep dogs.
2Of what use was the strength of their hands to me,
since their vigor had gone from them?
3Haggard from want and hunger,
they roameda the parched land
in desolate wastelands at night.
4In the brush they gathered salt herbs,
and their foodb was the root of the broom bush.
5They were banished from human society,
shouted at as if they were thieves.
6They were forced to live in the dry stream beds,
among the rocks and in holes in the ground.
7They brayed among the bushes
and huddled in the undergrowth.
8A base and nameless brood,
they were driven out of the land.
9“And now those young men mock me in song;
I have become a byword among them.
10They detest me and keep their distance;
they do not hesitate to spit in my face.
11Now that GOD Has Unstrung my bow and afflicted me,
they Throw Off restraint in my presence.
12On my right the tribec attacks;
they lay snares for my feet,
they build their siege ramps against me.
13They break up my road;
they succeed in destroying me.
‘No one can help him,’ they say.
14They advance as through a gaping breach;
amid the ruins they come rolling in.
15Terrors overwhelm me;
my dignity is driven away as by the wind,
my safety vanishes like a cloud.
16“And now my life ebbs away;
days of suffering grip me.
17Night pierces my bones;
my gnawing pains never rest.
18In His Great Power GOD Becomes like clothing to med ;
HE Binds me like the neck of my garment.
19HE Throws me into the mud,
and I am reduced to dust and ashes.
20“I cry out to YOU, GOD, but YOU Do Not Answer;
I stand up, but YOU Merely Look At me.
21YOU Turn On me ruthlessly;
with the Might of YOUR Hand YOU Attack me.
22YOU Snatch me Up and Drive me before the wind;
YOU Toss me About in the storm.
23I know YOU Will Bring me Down to death,
to the place appointed for all the living.
24“Surely no one lays a hand on a broken man
when he cries for help in his distress.
25Have I not wept for those in trouble?
Has not my soul grieved for the poor?
26Yet when I hoped for good, evil came;
when I looked for light, then came darkness.
27The churning inside me never stops;
days of suffering confront me.
28I go about blackened, but not by the sun;
I stand up in the assembly and cry for help.
29I have become a brother of jackals,

a companion of owls.
30My skin grows black and peels;
my body burns with fever. 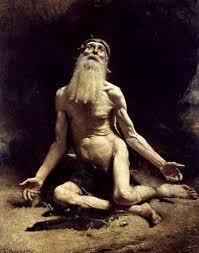 31My lyre is tuned to mourning,
and my pipe to the sound of wailing.

It is a sad "But now" which this chapter begins with. Adversity is here described as much to the life as prosperity was in the foregoing chapter, and the height of that did increase the depth of this. He contrasts his present condition with his former honor and authority.

IV. Time was when the secret of GOD Was With him, but now his communication with heaven was cut off (v. 20-22).

V. He had promised himself a long life, but now he saw death at the door (v. 23). One thing he mentions, which aggravated his affliction, that it surprised him when he looked for peace. But two things gave him some relief;

2. That his conscience witnessed for him that, in his prosperity, he had sympathized with those that were in misery (v. 25).