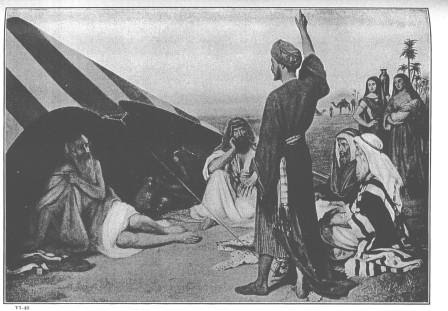 1Then Eliphaz the Temanite replied:

2“If someone ventures a word with you, will you be impatient?
But who can keep from speaking?
3Think how you have instructed many,
how you have strengthened feeble hands.
4Your words have supported those who stumbled;
you have strengthened faltering knees.
5But now trouble comes to you, and you are discouraged;
it strikes you, and you are dismayed.
6Should not your piety be your confidence
and your blameless ways your hope?
7“Consider now: Who, being innocent, has ever perished?
Where were the upright ever destroyed?
8As I have observed, those who plow evil
and those who sow trouble reap it.
9At the Breath of GOD they perish;
at the blast of His Anger they are no more.
10The lions may roar and growl,
yet the teeth of the great lions are broken.
11The lion perishes for lack of prey,
and the cubs of the lioness are scattered.
12“A word was secretly brought to me,
my ears caught a whisper of it.
13Amid disquieting dreams in the night,
when deep sleep falls on people,
14fear and trembling seized me
and made all my bones shake.
15A spirit glided past my face,
and the hair on my body stood on end.
16It stopped,
but I could not tell what it was.
A form stood before my eyes,
and I heard a hushed voice:

17‘Can a mortal be more righteous than GOD?
Can even a strong man be more pure than his Maker?

18If GODF places no trust in his servants,
If HE Charges His angels with error,
19how much more those who live in houses of clay,
whose foundations are in the dust,
who are crushed more readily than a moth!
20Between dawn and dusk they are broken to pieces;
unnoticed, they perish forever.
21Are not the cords of their tent pulled up,
so that they die without wisdom?’ 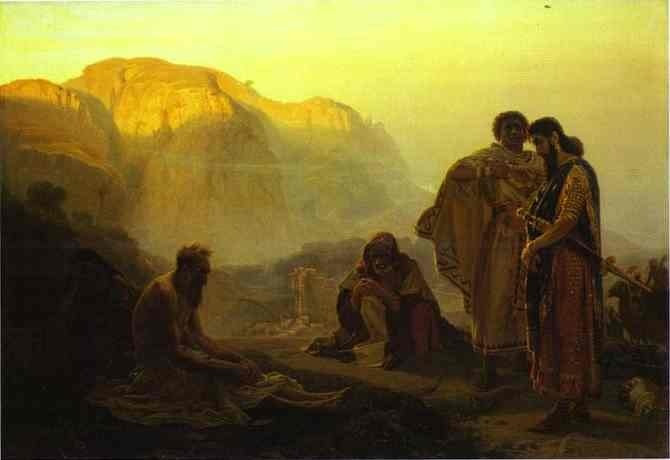 Eliphaz is a religious dogmatist whose dogmatism rests upon a mysterious and remarkable experience Job 4:12-16. Did a spirit ever pass before Job's face? Did Job's hair of his flesh ever stand up?  Eliphaz says many true things (as do the others), and often rises into eloquence, but he remains hard and cruel, a dogmatist who must be heard because of one remarkable experience.

The question in dispute is whether Job was an honest man or not, the same question that was in dispute between GOD and satan in the first two chapters. Job's friends say that, if Job were an honest man, he would not have been thus sorely afflicted, and therefore urge him to confess himself a hypocrite in the profession he had made: “No,” says Job, “that I will never do; I have offended GOD, but my heart, notwithstanding, has been upright with HIM;” and still he holds fast the comfort of his integrity.

Eliphaz, who, it is likely, was the senior, or of the best quality, begins with him in this chapter, in which,

II. He compliments Job with an acknowledgment of the eminence and usefulness of the profession he had made of religion (v. 3, 4).

III. He charges him with hypocrisy in his profession, grounding his charge upon his present troubles and his conduct under them (v. 5, 6).

IV. To make good the inference, he maintains that man’s wickedness is that which always brings GOD's Judgments (v. 7-11).

V. He corroborates his assertion by a vision which he had, in which he was reminded of the incontestable Purity and Justice of GOD, and the meanness, weakness, and sinfulness of man (v. 12-21).

By all this he aims to bring down Job’s spirit and to make him both penitent and patient under his afflictions.