Samaria’s Opposition To The Rebuilding Of Jerusalem

Opposition to the Rebuilding


1When Sanballat heard that we were rebuilding the wall, he became angry and was greatly incensed. He ridiculed the Jews, 2and in the presence of his associates and the army of Samaria, he said, “What are those feeble Jews doing? Will they restore their wall? Will they offer sacrifices? Will they finish in a day? Can they bring the stones back to life from those heaps of rubble—burned as they are?”

3Tobiah the Ammonite, who was at his side, said, “What they are building—even a fox climbing up on it would break down their wall of stones!” 4Hear us, our GOD, for we are despised. Turn their insults back on their own heads. Give them over as plunder in a land of captivity. 5Do not cover up their guilt or blot out their sins From YOUR Sight, for they have thrown insults in the face ofa the builders.

6So we rebuilt the wall till all of it reached half its height, for the people worked with all their heart. 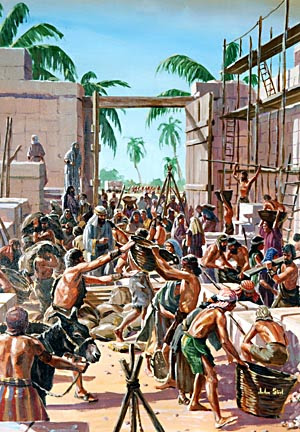 7But when Sanballat, Tobiah, the Arabs, the Ammonites and the people of Ashdod heard that the repairs to Jerusalem’s walls had gone ahead and that the gaps were being closed, they were very angry. 8They all plotted together to come and fight against Jerusalem and stir up trouble against it. 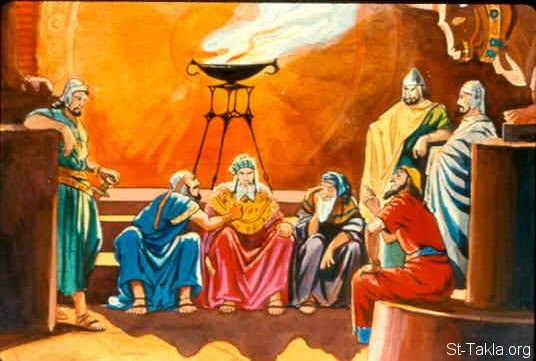 9But we prayed to our GOD and posted a guard day and night to meet this threat.

10Meanwhile, the people in Judah said, “The strength of the laborers is giving out, and there is so much rubble that we cannot rebuild the wall.”

11Also our enemies said, “Before they know it or see us, we will be right there among them and will kill them and put an end to the work.”

12Then the Jews who lived near them came and told us ten times over, “Wherever you turn, they will attack us.”

13Therefore I stationed some of the people behind the lowest points of the wall at the exposed places, posting them by families, with their swords, spears and bows. 14After I looked things over, I stood up and said to the nobles, the officials and the rest of the people, “Don’t be afraid of them. Remember The LORD, WHO Is Great and Awesome, and fight for your families, your sons and your daughters, your wives and your homes.” 15When our enemies heard that we were aware of their plot and that GOD Had Frustrated it, we all returned to the wall, each to our own work.

16From that day on, half of my men did the work, while the other half were equipped with spears, shields, bows and armor.

The officers posted themselves behind all the people of Judah 17who were building the wall. Those who carried materials did their work with one hand and held a weapon in the other, 18and each of the builders wore his sword at his side as he worked. But the man who sounded the trumpet stayed with me.

19Then I said to the nobles, the officials and the rest of the people, “The work is extensive and spread out, and we are widely separated from each other along the wall. 20Wherever you hear the sound of the trumpet, join us there. Our GOD Will Fight For us!” 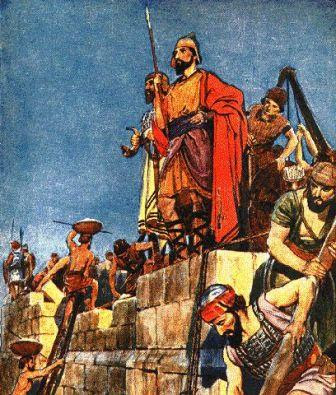 21 So we continued the work with half the men holding spears, from the first light of dawn till the stars came out.

22At that time I also said to the people, “Have every man and his helper stay inside Jerusalem at night, so they can serve us as guards by night and as workers by day.” 23Neither I nor my brothers nor my men nor the guards with me took off our clothes; each had his weapon, even when he went for water.

We must clearly understand, to begin with, that Samaria was already, even in that early day, the deadly rival of Jerusalem; and also that Sanballat was the governor of Samaria. And Sanballat was a man of this kind, that he was not content with doing his very best to make Samaria both prosperous and powerful, but he must also do his very best to keep Jerusalem downtrodden and destroyed.

And thus it was that, when Sanballat heard that Nehemiah had come from Susa, Persia with a commission from king Artaxerxes to rebuild the walls of Jerusalem, the news drove Sanballat absolutely beside himself. And thus it is that such a large part of Nehemiah's autobiography is taken up with Sanballat's vile plots and conspiracies both to murder Nehemiah and to destroy the new Jerusalem. We see in Sanballat an outstanding example of the sleepless malice of all party spirit.

Many a good work has been looked upon with contempt by proud and haughty scorners. Those who disagree in almost everything will unite in persecution. Nehemiah did not answer these fools according to their folly, but looked up To GOD by prayer. GOD'S people have often been a despised people, but HE Hears all the scorns that are put upon them, and it is their comfort that HE Does So. Nehemiah had reason to think that the hearts of those sinners were incurably hardened, or else he would not have prayed that their sins might never be blotted out.

Good Work of The LORD Goes On well when people of GOD have one mind to it. The reproaches of enemies should only quicken us to our holy duty, not drive us from it.