Be Zealous For The Fear Of JEHOVAH And Love Of JESUS

1When you sit to dine with a ruler,
note well what is before you,
2and put a knife to your throat
if you are given to gluttony.
3Do not crave his delicacies,
for that food is deceptive.

4 Do not wear yourself out to get rich;
do not trust your own cleverness.
5Cast but a glance at riches, and they are gone,
for they will surely sprout wings
and fly off to the sky like an eagle.

6Do not eat the food of a begrudging host,
do not crave his delicacies;
7for he is the kind of person
who is always thinking about the cost.b
“Eat and drink,” he says to you,
but his heart is not with you.
8You will vomit up the little you have eaten
and will have wasted your compliments.

9Do not speak to fools,
for they will scorn your prudent words.

10Do not move an ancient boundary stone
or encroach on the fields of the fatherless,
11 For their Defender Is Strong;
HE Will Take Up their case Against you.

12Apply your heart to instruction
and your ears to words of knowledge.

15My son, if your heart is wise,
then my heart will be glad indeed;
16my inmost being will rejoice
when your lips speak what is right.

17Do not let your heart envy sinners,
but always be zealous for the Fear of The LORD.

18There is surely a future hope for you,
and your hope will not be cut off.

19Listen, my son, and be wise,
and set your heart on the right path:
20 Do not join those who drink too much wine
or gorge themselves on meat,
21for drunkards and gluttons become poor,
and drowsiness clothes them in rags.

22 Listen to your father, who gave you life,
and do not despise your mother when she is old. 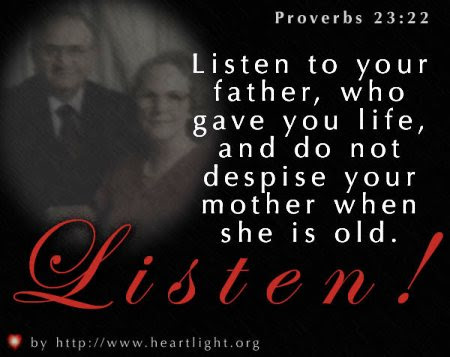 23 Buy the truth and do not sell it—
wisdom, instruction and insight as well.

24The father of a righteous child has great joy;
a man who fathers a wise son rejoices in him.
25May your father and mother rejoice;
may she who gave you birth be joyful!

26My son, give me your heart
and let your eyes delight in my ways, 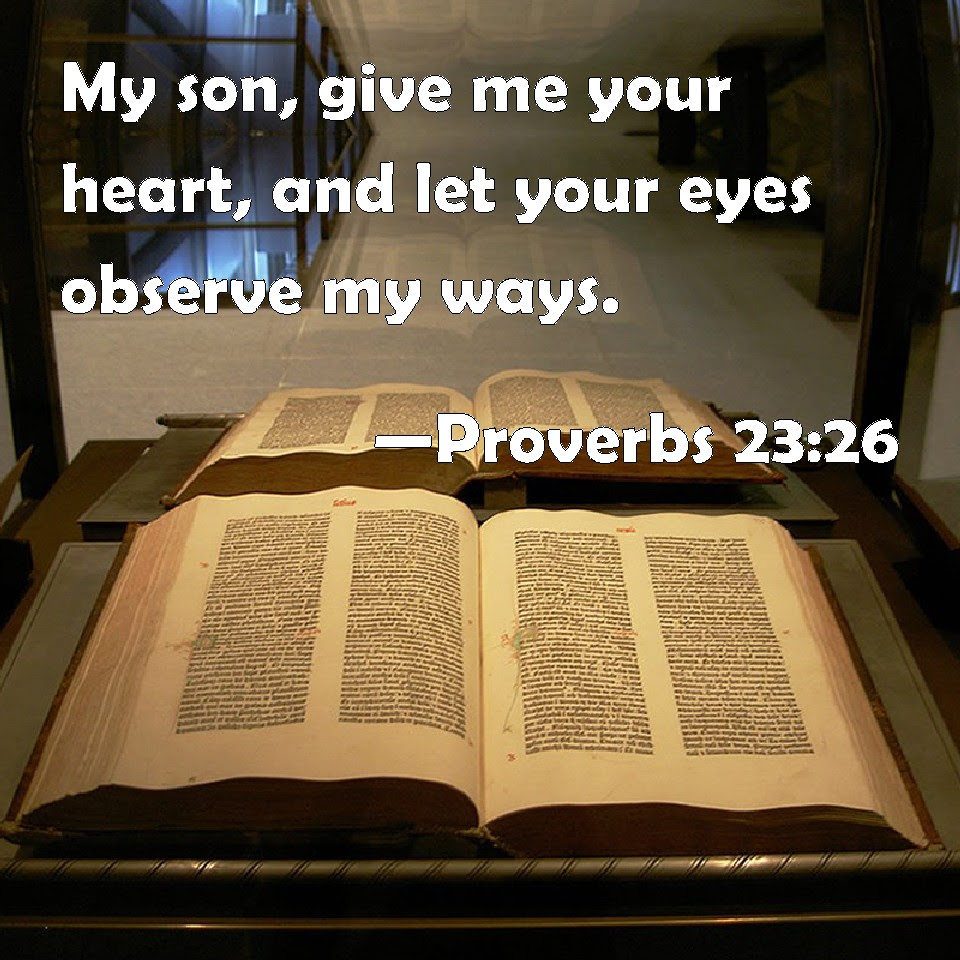 27for an adulterous woman is a deep pit,
and a wayward wife is a narrow well.
28Like a bandit she lies in wait
and multiplies the unfaithful among men.

29Who has woe? Who has sorrow?
Who has strife? Who has complaints?
Who has needless bruises? Who has bloodshot eyes?
30Those who linger over wine,
who go to sample bowls of mixed wine.
31Do not gaze at wine when it is red,
when it sparkles in the cup,
when it goes down smoothly!
32In the end it bites like a snake
and poisons like a viper.
33Your eyes will see strange sights,
and your mind will imagine confusing things.
34You will be like one sleeping on the high seas,
lying on top of the rigging.
35“They hit me,” you will say, “but I’m not hurt!
They beat me, but I don’t feel it!
When will I wake up
so I can find another drink?”

Solomon warns against drunkenness. Those that would be kept from sin, must keep from all the beginnings of it, and fear coming within reach of its allurements. Foresee the punishment, what it will at last end in, if repentance prevent not. It makes men quarrel. Drunkards willfully make woe and sorrow for themselves. It makes men impure and insolent. The tongue grows unruly; the heart utters things contrary to reason, religion, and common civility.

It stupifies and besots men. They are in danger of death, of damnation; as much exposed as if they slept upon the top of a mast, yet feel secure. They fear no peril when the terrors of The LORD are before them; they feel no pain when the Judgments of GOD Are actually Upon them. So lost is a drunkard to virtue and honor, so wretchedly is his conscience seared, that he is not ashamed to say, I will seek it again.

With good reason we were bid to stop before the beginning. Who that has common sense would contract a habit, or sell himself to a sin, which tends to such guilt and misery, and exposes a man every day to the danger of dying insensible, and awaking in hell? Wisdom seems in these chapters to take up the discourse as at the beginning of the book. They must be considered as the WORDS of CHRIST to the sinner.