A Lament Over Pharaoh Continues

A Lament Over Pharaoh

1In the twelfth year, in the twelfth month on the first day, The WORD of The LORD Came To me: 2“Son of man, take up a lament concerning Pharaoh king of Egypt and say to him:

you are like a monster in the seas
thrashing about in your streams,
churning the water with your feet
and muddying the streams. 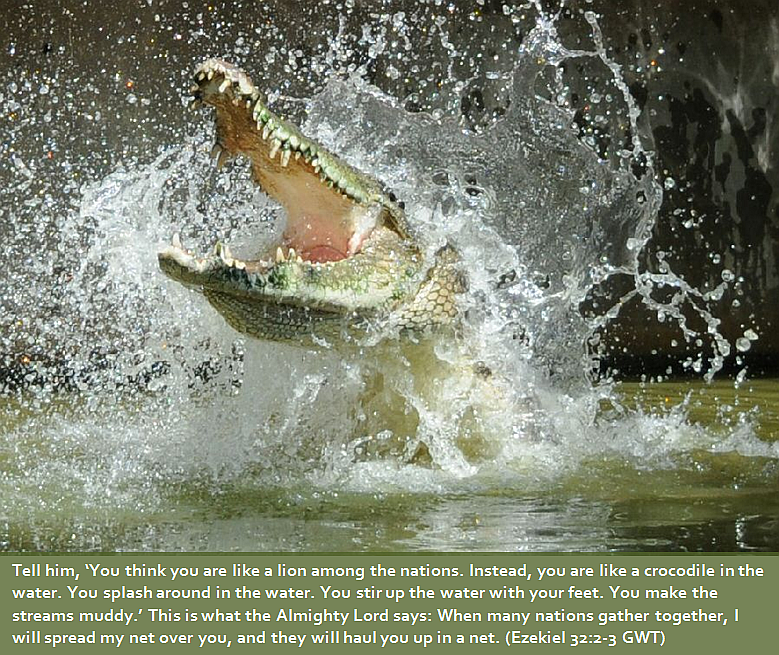 3“ ‘This Is What The SOVEREIGN LORD Says:

“ ‘With a great throng of people
I Will Cast MY Net over you,
and they will haul you up in MY Net.
4I Will Throw you on the land
and Hurl you on the open field.
I Will Let all the birds of the sky settle on you
and all the animals of the wild gorge themselves on you.
5I Will Spread your flesh on the mountains
and Fill the valleys with your remains.
6I Will Drench the land with your flowing blood
all the way to the mountains,
and the ravines will be filled with your flesh.
7When I Snuff you Out, I Will Cover the heavens
and darken their stars;
I Will Cover the sun with a cloud,
and the moon will not give its light.
8All the shining lights in the heavens
I Will Darken over you;
I Will Bring darkness over your land,

9I Will Trouble the hearts of many peoples
When I Bring About your destruction among the nations,
amonga lands you have not known.
10I Will Cause many peoples to be appalled at you,
and their kings will shudder with horror because of you
When I Brandish MY Sword before them.
On the day of your downfall
each of them will tremble
every moment for his life.

11“ ‘For This Is What The SOVEREIGN LORD Says:

“ ‘The sword of the king of Babylon
will come against you. 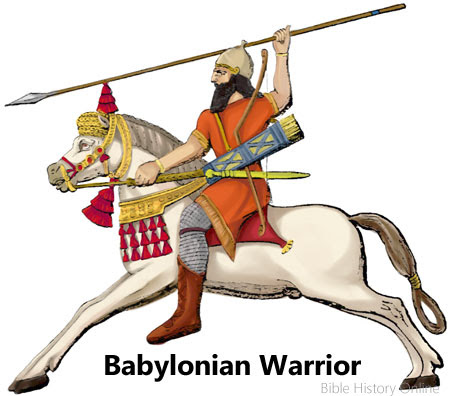 12I Will Cause your hordes to fall
by the swords of mighty men—
the most ruthless of all nations.
They will shatter the pride of Egypt,
and all her hordes will be overthrown.
13I Will Destroy all her cattle
from beside abundant waters
no longer to be stirred by the foot of man
or muddied by the hooves of cattle.
14Then I Will Let her waters settle
and Make her streams flow like oil,

15When I make Egypt desolate
and strip the land of everything in it,
when I strike down all who live there,

Then they will know that I AM The LORD.’

Egypt’s Descent Into the Realm of the Dead

17In the twelfth year, on the fifteenth day of the month, The WORD of The LORD Came To me: 18“Son of man, wail for the hordes of Egypt and consign to the earth below both her and the daughters of mighty nations, along with those who go down to the pit. 19Say to them, ‘Are you more favored than others? Go down and be laid among the uncircumcised.’ 20They will fall among those killed by the sword. The sword is drawn; let her be dragged off with all her hordes. 21From within the realm of the dead the mighty leaders will say of Egypt and her allies, ‘They have come down and they lie with the uncircumcised, with those killed by the sword.’

22“Assyria is there with her whole army; she is surrounded by the graves of all her slain, all who have fallen by the sword. 23Their graves are in the depths of the pit and her army lies around her grave. All who had spread terror in the land of the living are slain, fallen by the sword. 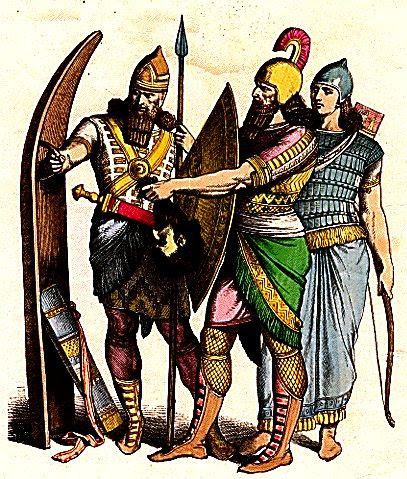 26“Meshek and Tubal are there, with all their hordes around their graves. All of them are uncircumcised, killed by the sword because they spread their terror in the land of the living. 27But they do not lie with the fallen warriors of old,b who went down to the realm of the dead with their weapons of war—their swords placed under their heads and their shieldsc resting on their bones—though these warriors also had terrorized the land of the living. 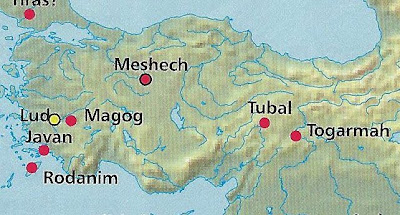 28“You too, Pharaoh, will be broken and will lie among the uncircumcised, with those killed by the sword.

29“Edom is there, her kings and all her princes; despite their power, they are laid with those killed by the sword. They lie with the uncircumcised, with those who go down to the pit.

30“All the princes of the north and all the Sidonians are there; they went down with the slain in disgrace despite the terror caused by their power. They lie uncircumcised with those killed by the sword and bear their shame with those who go down to the pit.

The date of the first is given, Ezekiel 22:1, in which the king of Egypt is compared to a large fish taken in a net, and brought to land, and left on it, to be the prey of the fowls of the air and beasts of the field, Ezekiel 32:2, and the ruin of that kingdom is further amplified by the casting of it on the mountains and valleys; by the land flowing with its blood; by the darkness of the heavens; by the vexation in the hearts of many people; and by the amazement of kings and nations, Ezekiel 32:5, the means and instruments of all which will be the king of Babylon and his army, Ezekiel 32:11, the devastation made by him, which would be such as would cause lamentation in other nations, is described, Ezekiel 32:13.

Then follows the other prophecy, whose date is given, Ezekiel 32:17, the prophet is bid to lament the fall of Egypt, which is represented under the funeral of a corpse, Ezekiel 32:18, saluted by those gone down to the grave before, or were become desolate; which are mentioned, to assure Egypt of its destruction, Ezekiel 32:21 as the Assyrian empire, and all its provinces, Ezekiel 32:22, the Persians and Medes, with all their dominions, Ezekiel 32:24, the posterity of Meshech and Tubal, or the Scythians, those warlike people, Ezekiel 32:26, the Edomites, the princes of the north, and all the Sidonians, Ezekiel 32:29 which would be a comfort, though a poor one to the king of Egypt and his subjects, to have such company with them, Ezekiel 32:31.