JEHOVAH'S Promise of Israel's Restoration In HIS SON JESUS

Hope for the Mountains of Israel

1“Son of man, prophesy to the mountains of Israel and say,

‘Mountains of Israel, Hear The WORD of The LORD.


2This Is What The SOVEREIGN LORD Says:

The enemy said of you, “Aha! The ancient heights have become our possession.” ’

Because they ravaged and crushed you from every side so that you became the possession of the rest of the nations and the object of people’s malicious talk and slander, 4therefore, mountains of Israel, Hear The WORD of The SOVEREIGN LORD:


This Is What The SOVEREIGN LORD Says to the mountains and hills, to the ravines and valleys, to the desolate ruins and the deserted towns that have been plundered and ridiculed by the rest of the nations around you—


5This Is What The SOVEREIGN LORD Says:

In MY Burning Zeal I Have Spoken Against the rest of the nations, and against all Edom, for with glee and with malice in their hearts they made MY Land their own possession so that they might plunder its pastureland.’ 6Therefore prophesy concerning the land of Israel and say to the mountains and hills, to the ravines and valleys:


This Is What The SOVEREIGN LORD Says:

I Speak in MY Jealous Wrath because you have suffered the scorn of the nations.


7Therefore This Is What The SOVEREIGN LORD Says:


I Swear with Uplifted Hand that the nations around you will also suffer scorn. 8“ ‘But you, mountains of Israel, will produce branches and fruit for MY people Israel, for they will soon come home. 9I AM Concerned for you and Will Look On you with favor; you will be plowed and sown, 10and I Will Cause many people to live on you—yes, all of Israel. The towns will be inhabited and the ruins rebuilt. 11I Will Increase the number of people and animals living on you, and they will be fruitful and become numerous. I Will Settle people on you as in the past and Will Make you prosper more than before.

Then you will know that I AM The LORD.

12I Will Cause people, MY people Israel, to live on you. They will possess you, and you will be their inheritance; you will never again deprive them of their children.

13“ This Is What The SOVEREIGN LORD Says:

16Again The WORD of The LORD Came To me:

17“Son of man, when the people of Israel were living in their own land, they defiled it by their conduct and their actions. Their conduct was like a woman’s monthly uncleanness in My Sight. 18So I Poured Out My Wrath On them because they had shed blood in the land and because they had defiled it with their idols. 19I Dispersed them among the nations, and they were scattered through the countries; I Judged them according to their conduct and their actions. 20And wherever they went among the nations they profaned My Holy Name, for it was said of them, ‘These are The LORD'S people, and yet they had to leave HIS Land.’ 21I Had Concern for MY Holy Name, Which the people of Israel profaned among the nations where they had gone.

22“Therefore say to the Israelites,

This Is What The SOVEREIGN LORD Says:

Then the nations will know that I AM The LORD, Declares The SOVEREIGN LORD, When I AM Proved HOLY through you before their eyes.

24“ ‘For I Will Take you Out of the nations; I Will Gather you from all the countries and Bring you Back into your own land. 25 I Will Sprinkle clean water on you, and you will be clean; I Will Cleanse you from all your impurities and from all your idols.

26I Will Give you a new heart and put a new spirit in you; 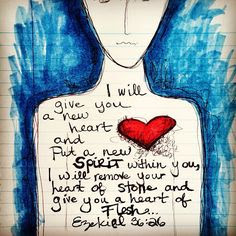 I will remove from you your heart of stone and give you a heart of flesh. 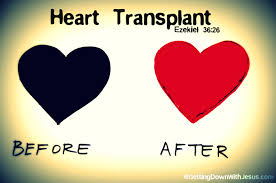 27And I Will Put MY SPIRIT in you and Move you to follow MY Decrees and be careful to keep MY Laws. 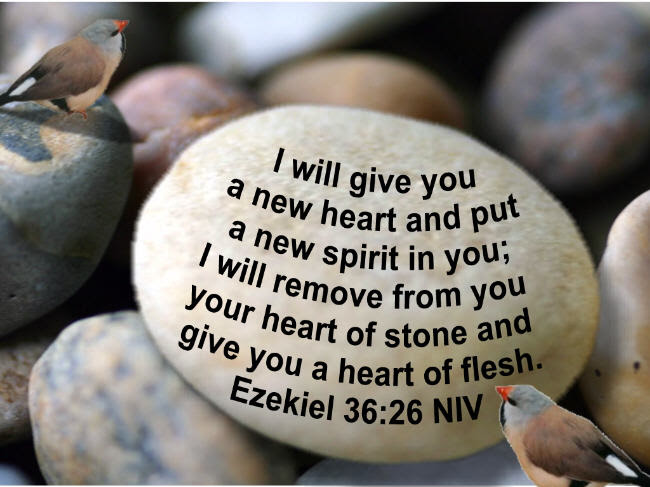 28Then you will live in the land I Gave your ancestors; you will be MY people, and I Will Be your GOD. 29I Will Save you from all your uncleanness. I Will Call for the grain and Make it plentiful and Will Not Bring famine upon you. 30I Will Increase the fruit of the trees and the crops of the field, so that you will no longer suffer disgrace among the nations because of famine. 31Then you will remember your evil ways and wicked deeds, and you will loathe yourselves for your sins and detestable practices.

32 I Want you to know that I AM Not Doing this for your sake, Declares The SOVEREIGN LORD. Be ashamed and disgraced for your conduct, people of Israel!

33“ This Is What The SOVEREIGN LORD Says:

On the day I Cleanse you from all your sins, I Will Resettle your towns, and the ruins will be rebuilt. 34The desolate land will be cultivated instead of lying desolate in the sight of all who pass through it. 35They will say, “This land that was laid waste has become like the Garden of Eden; the cities that were lying in ruins, desolate and destroyed, are now fortified and inhabited.” 36Then the nations around you that remain will know that I The LORD Have Rebuilt what was destroyed and Have Replanted what was desolate. I The LORD Have Spoken, and I Will Do it.’

37“This Is What The SOVEREIGN LORD Says:

Once again I Will Yield to Israel’s plea and do this for them: I Will Make their people as numerous as sheep, 38as numerous as the flocks for offerings at Jerusalem during her appointed festivals. So will the ruined cities be filled with flocks of people.

Then they will know that I AM The LORD.”

This chapter is a prophecy concerning the desolations of the land of Israel, and the causes of them; of the return of the people to it, and the fruitfulness of it; and of spiritual blessings bestowed upon them in the latter day.

And first, for the comfort of the people of Israel, it is observed that their enemies that insulted them will suffer the vengeance of GOD'S Wrath, particularly the Edomites, Ezekiel 36:1, that the land of Israel should again become fruitful, its cities rebuilt, men and beasts be multiplied upon it, and be no more liable to destruction, nor bear any more the reproach of the Heathen, Ezekiel 36:8, the causes of its desolation and destruction, the sins of its inhabitants, especially bloodshed, idolatry, and profanation of The Name of GOD, Ezekiel 36:16.

Nevertheless The LORD Promises To Have Mercy on them, and Return them to their own land, not for their sakes, but for HIS Own Name's Sake, Ezekiel 36:21, then follow promises of spiritual blessings to them: as purification from all sin by the Blood of CHRIST; regeneration by HIS SPIRIT and Grace; and evangelical obedience as the fruit of that, Ezekiel 36:25, and others of a mixed kind, respecting partly temporal and partly spiritual blessings, Ezekiel 36:28, for all which it is expected of The LORD That HE Should Be Prayed To for them; particularly their inhabitation in their own land, and the multiplication of them in it, with which the chapter concludes, Ezekiel 36:37.