The KINGDOM Of JESUS THE MESSIAH Prophesied


1In the seventh year, in the fifth month on the tenth day, some of the elders of Israel came to inquire of The LORD, and they sat down in front of me.

4“Will you judge them? Will you judge them, son of man? Then confront them with the detestable practices of their ancestors 5and say to them: ‘This Is What The SOVEREIGN LORD Says: On the day I Chose Israel, I Swore With Uplifted Hand to the descendants of Jacob and Revealed MYSELF to them in Egypt. With Uplifted Hand I Said to them, “I AM The LORD your GOD.” 6On that day I Swore to them that I Would Bring them Out of Egypt into a land I Had Searched Out for them, a land flowing with milk and honey, the most beautiful of all lands. 7And I Said to them, “Each of you, get rid of the vile images you have set your eyes on, and do not defile yourselves with the idols of Egypt. I AM The LORD your GOD.”

8“ ‘But they rebelled against ME and would not listen to ME; they did not get rid of the vile images they had set their eyes on, nor did they forsake the idols of Egypt. So I Said I Would Pour Out MY Wrath on them and Spend MY Anger against them in Egypt. 9But for the Sake of MY Name, I Brought them Out of Egypt. I Did It To Keep MY Name from Being Profaned in the eyes of the nations among whom they lived and in whose sight I Had Revealed MYSELF to the Israelites. 10Therefore I Led them Out of Egypt and Brought them Into the wilderness.11I Gave them MY Decrees and Made Known to them MY Laws, by which the person who obeys them will live. 12Also I Gave them MY Sabbaths as a sign between us, so they would know that I The LORD Made them holy. 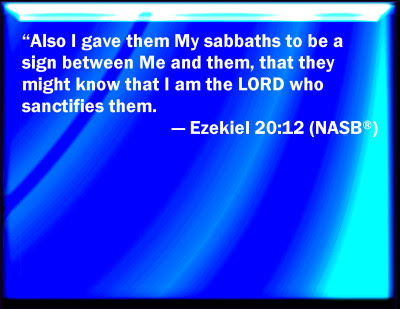 13“ ‘Yet the people of Israel rebelled against ME in the wilderness. They did not follow MY Decrees but rejected MY Laws—by which the person who obeys them will live—and they utterly desecrated My Sabbaths. So I Said I Would Pour Out MY Wrath on them and Destroy them in the wilderness. 14But for the Sake of MY Name I Did What Would Keep It from Being Profaned in the eyes of the nations in whose sight I had brought them out. 15Also with Uplifted Hand I Swore to them in the wilderness that I Would Not Bring them into the land I Had Given them—a land flowing with milk and honey, the most beautiful of all lands— 16because they rejected MY Laws and did not follow MY Decrees and desecrated MY Sabbaths. For their hearts were devoted to their idols. 17Yet I Looked On them with pity and Did Not Destroy them or Put an end to them in the wilderness. 18I Said to their children in the wilderness, “Do not follow the statutes of your parents or keep their laws or defile yourselves with their idols. 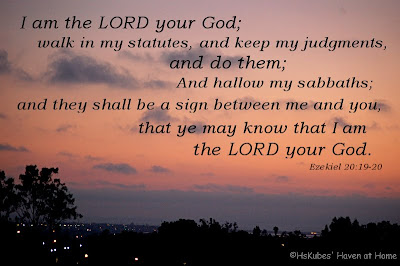 21“ ‘But the children rebelled against ME: They did not follow MY Decrees, they were not careful to keep MY Laws, of which I Said, “The person who obeys them will live by them,” and they desecrated MY Sabbaths. So I Said I Would Pour Out MY Wrath on them and Spend MY Anger against them in the wilderness. 22But I Withheld MY Hand, and for the Sake of MY Name I Did What Would Keep It from Being Profaned in the eyes of the nations in whose sight I Had Brought them out. 23Also with Uplifted Hand I Swore to them in the wilderness that I Would Disperse them among the nations and Scatter them through the countries, 24because they had not obeyed MY Laws but had rejected MY Decrees and desecrated My Sabbaths, and their eyes lusted after their parents’ idols.


25 So I Gave them other statutes that were not good and Laws through which they could not live;


26I defiled them through their gifts—the sacrifice of every firstborn—that I might fill them with horror so they would know that I AM The LORD.’

27“Therefore, son of man, speak to the people of Israel and say to them, ‘This Is What The SOVEREIGN LORD Says: In this also your ancestors blasphemed ME by being unfaithful to ME: 28When I Brought them Into the land I Had Sworn To Give them and they saw any high hill or any leafy tree, there they offered their sacrifices, made offerings that aroused My Anger, presented their fragrant incense and poured out their drink offerings. 29Then I Said to them: What is this high place you go to?’ ” (It is called Bamaha to this day.)

30“Therefore say to the Israelites: ‘This Is What The SOVEREIGN LORD Says: Will you defile yourselves the way your ancestors did and lust after their vile images? 31When you offer your gifts—the sacrifice of your children in the fire—you continue to defile yourselves with all your idols to this day. AM I To Let you inquire of ME, you Israelites? As Surely As I Live, Declares The SOVEREIGN LORD, I Will Not Let you inquire of ME.


Then you will know that I AM The LORD.

39“ ‘As for you, people of Israel, This Is What The SOVEREIGN LORD Says: Go and serve your idols, every one of you!

But afterward you will surely listen to ME and no longer profane MY Holy Name with your gifts and idols. 40For on MY Holy Mountain, the high mountain of Israel, Declares The Sovereign Lord, there in the land all the people of Israel will serve ME, and there I Will Accept them. There I Will Require your offerings and your choice gifts, along with all your holy sacrifices. 41I Will Accept you as fragrant incense When I Bring you Out from the nations and Gather you from the countries where you have been scattered, and I Will Be Proved Holy through you in the sight of the nations. 42Then you will know that I AM The LORD, When I Bring you into the land of Israel, the land I Had Sworn with Uplifted Hand To Give to your ancestors. 43There you will remember your conduct and all the actions by which you have defiled yourselves, and you will loathe yourselves for all the evil you have done. 44You will know that I AM The LORD, When I Deal With you for My Name’s Sake and not according to your evil ways and your corrupt practices, you people of Israel, Declares The SOVEREIGN LORD.’ ”


Prophecy Against the South

45The WORD of The LORD Came To ME: 46“Son of man, set your face toward the south; preach against the south and prophesy against the forest of the southland. 47Say to the southern forest: ‘Hear The WORD of The LORD. This Is What The SOVEREIGN LORD Says: I AM About To Set Fire to you, and it will consume all your trees, both green and dry. The blazing flame will not be quenched, and every face from south to north will be scorched by it. 48Everyone will see that I The LORD Have Kindled it; it will not be quenched.’ ”

49Then I said, “SOVEREIGN LORD, they are saying of me, ‘Isn’t he just telling parables?’ ”c

The prophecies of this section Ezekiel 20-23 were delivered nearly a year after those of the former Ezekiel 8:1.

Ezekiel in reply to other inquiries from the elders of the people, sets forth their national history, the national Judgment, and the Hope of Divine Mercy. This leads up to the prediction of the KINGDOM of JESUS The MESSIAH.

A deputation of the elders of Israel, as usual, in their distress, came to request Ezekiel to ask Counsel of GOD, Ezekiel 20:1.

Notwithstanding which The LORD most graciously Promises to Restore them to their own land, after they should be purged from their dross, Ezekiel 20:33-44. The five last verses of this chapter ought to begin the next, as they are connected with the subject of that chapter, being a prophecy against Jerusalem, which lay to the south of Chaldea, where the prophet then was, and which here and elsewhere is represented under the emblem of a forest doomed to be destroyed by fire, Ezekiel 20:45-49.