1And in the first year of Darius the Mede, I took my stand to support and protect him.)

The Kings of the South and the North 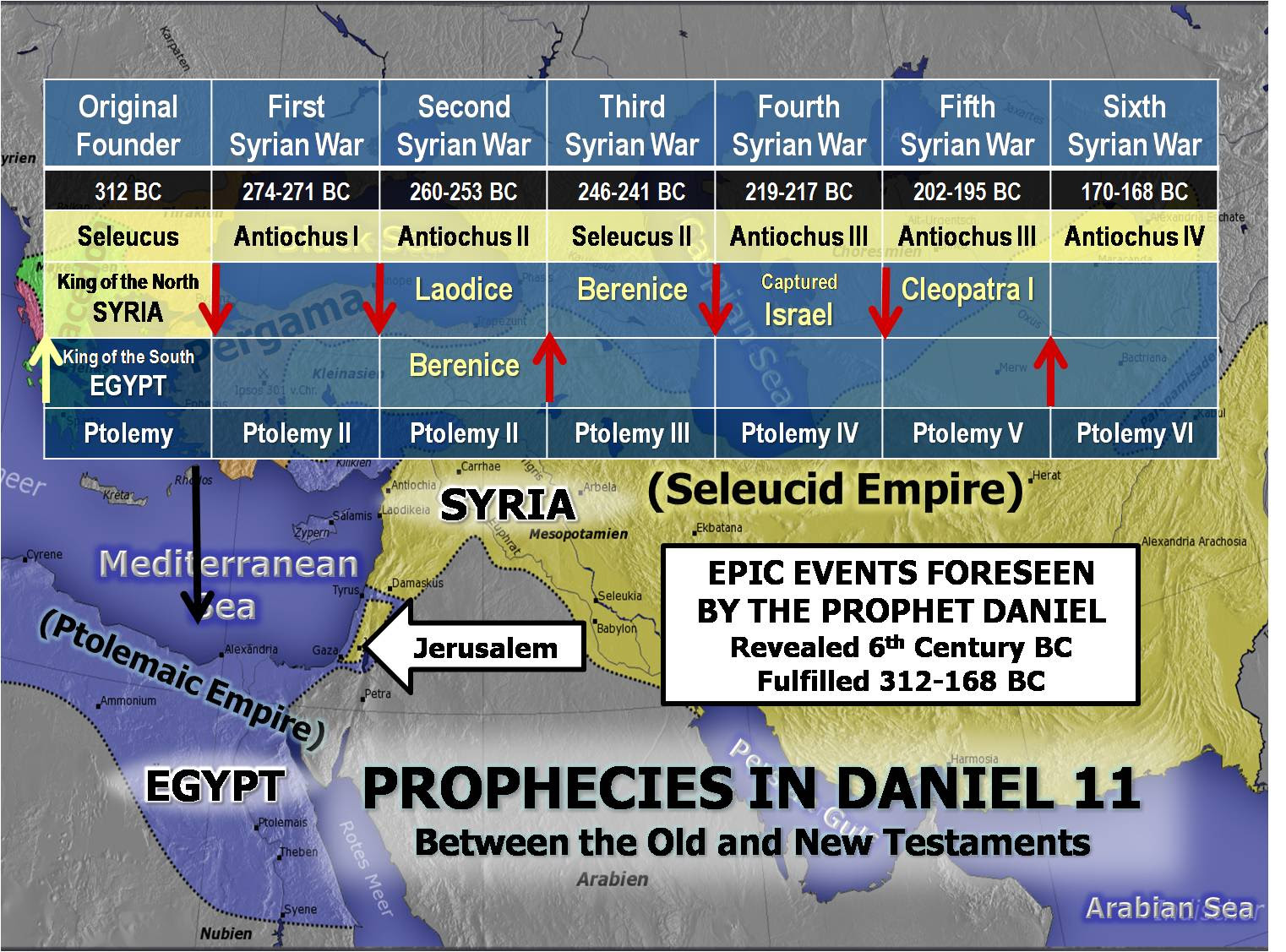 2“Now then, I tell you the truth: Three more kings will arise in Persia, and then a fourth, who will be far richer than all the others. When he has gained power by his wealth, he will stir up everyone against the kingdom of Greece. 3Then a mighty king will arise, who will rule with great power and do as he pleases. 4After he has arisen, his empire will be broken up and parceled out toward the four winds of heaven. It will not go to his descendants, nor will it have the power he exercised, because his empire will be uprooted and given to others.

14“In those times many will rise against the king of the South. Those who are violent among your own people will rebel in fulfillment of the vision, but without success. 15Then the king of the North will come and build up siege ramps and will capture a fortified city. The forces of the South will be powerless to resist; even their best troops will not have the strength to stand. 16The invader will do as he pleases; no one will be able to stand against him. He will establish himself in the Beautiful Land and will have the power to destroy it.17He will determine to come with the might of his entire kingdom and will make an alliance with the king of the South. And he will give him a daughter in marriage in order to overthrow the kingdom, but his plansc will not succeed or help him. 18Then he will turn his attention to the coastlands and will take many of them, but a commander will put an end to his insolence and will turn his insolence back on him.19After this, he will turn back toward the fortresses of his own country but will stumble and fall, to be seen no more.

20“His successor will send out a tax collector to maintain the royal splendor. In a few years, however, he will be destroyed, yet not in anger or in battle.

21“He will be succeeded by a contemptible person who has not been given the honor of royalty. He will invade the kingdom when its people feel secure, and he will seize it through intrigue. 22Then an overwhelming army will be swept away before him; both it and a prince of the covenant will be destroyed. 23After coming to an agreement with him, he will act deceitfully, and with only a few people he will rise to power. 24When the richest provinces feel secure, he will invade them and will achieve what neither his fathers nor his forefathers did. He will distribute plunder, loot and wealth among his followers. He will plot the overthrow of fortresses—but only for a time.

25“With a large army he will stir up his strength and courage against the king of the South. The king of the South will wage war with a large and very powerful army, but he will not be able to stand because of the plots devised against him. 26Those who eat from the king’s provisions will try to destroy him; his army will be swept away, and many will fall in battle. 27The two kings, with their hearts bent on evil, will sit at the same table and lie to each other, but to no avail, because an end will still come at the appointed time. 28The king of the North will return to his own country with great wealth, but his heart will be set against the Holy Covenant. He will take action against it and then return to his own country.

29“At the appointed time he will invade the South again, but this time the outcome will be different from what it was before. 30Ships of the western coastlands will oppose him, and he will lose heart. Then he will turn back and vent his fury against the Holy Covenant. He will return and show favor to those who forsake the Holy Covenant.

31“His armed forces will rise up to desecrate The Temple fortress and will abolish the daily sacrifice. Then they will set up the abomination that causes desolation. 32With flattery he will corrupt those who have violated the Covenant, but the people who know their GOD will firmly resist him.

33“Those who are wise will instruct many, though for a time they will fall by the sword or be burned or captured or plundered. 34When they fall, they will receive a little help, and many who are not sincere will join them. 35Some of the wise will stumble, so that they may be refined, purified and made spotless until the time of the end, for it will still come at the appointed time.

The King Who Exalts Himself 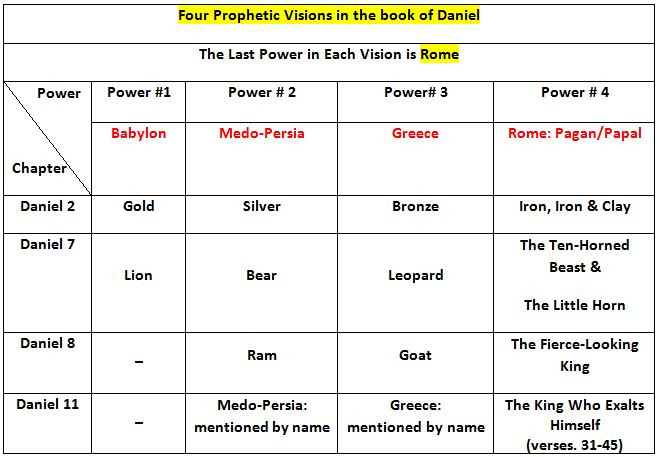 36“The king will do as he pleases. He will exalt and magnify himself above every god and will say unheard-of things against The GOD of gods. He will be successful until the time of wrath is completed, for what has been determined must take place. 37He will show no regard for the gods of his ancestors or for the one desired by women, nor will he regard any god, but will exalt himself above them all.38Instead of them, he will honor a god of fortresses; a god unknown to his ancestors he will honor with gold and silver, with precious stones and costly gifts. 39He will attack the mightiest fortresses with the help of a foreign god and will greatly honor those who acknowledge him. He will make them rulers over many people and will distribute the land at a price.d

40“At the time of the end the king of the South will engage him in battle, and the king of the North will storm out against him with chariots and cavalry and a great fleet of ships. He will invade many countries and sweep through them like a flood. 41He will also invade the Beautiful Land. Many countries will fall, but Edom, Moab and the leaders of Ammon will be delivered from his hand. 42He will extend his power over many countries; Egypt will not escape. 43He will gain control of the treasures of gold and silver and all the riches of Egypt, with the Libyans and Cushitese in submission. 44But reports from the east and the north will alarm him, and he will set out in a great rage to destroy and annihilate many. 45He will pitch his royal tents between the seas atf the beautiful holy mountain. Yet he will come to his end, and no one will help him.

In this chapter The Angel Makes good His promise to Daniel, that HE Would show him what was written in the Scripture of Truth, concerning the monarchies of the earth, and what would befall his people the Jews in the latter days; and after HE Had Observed that HE Had Strengthened and Confirmed Darius the Mede, who was the first king of the then present flourishing monarchy, Daniel 11:1, HE Foretells the number of the kings of Persia, and particularly Describes the fourth, Daniel 11:2 Predicts the rise of the Grecian monarchy under Alexander the great, and the disposition of it after his death, Daniel 11:3 and then Proceeds To Give an account of the two principal kingdoms of that monarchy, into which it was divided, the Seleucidae and Lagidae; and of their kings, the king of Egypt, and the king of Syria, under the names of the king of the south, and the king of the north, and of their power and agreement, Daniel 11:5. 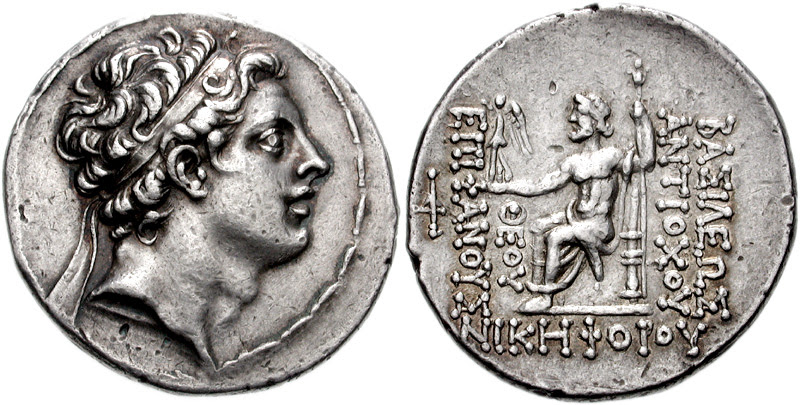