Woe To Nineveh, The City Of Blood, Full Of Lies! 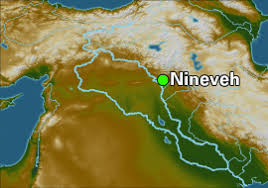 1Woe to the city of blood,
full of lies,
full of plunder,
never without victims!
2The crack of whips,
the clatter of wheels,
galloping horses
and jolting chariots!
3Charging cavalry,
flashing swords
and glittering spears!
Many casualties,
piles of dead,
bodies without number,
people stumbling over the corpses—
4all because of the wanton lust of a prostitute,
alluring, the mistress of sorceries,
who enslaved nations by her prostitution
and peoples by her witchcraft.

5“I AM Against you,” Declares The LORD ALMIGHTY.

“I Will Lift your skirts over your face.
I Will Show the nations your nakedness
and the kingdoms your shame.
6I Will Pelt you with filth,
I Will Treat you with contempt
and Make you a spectacle.
7All who see you will flee from you and say,
‘Nineveh is in ruins—who will mourn for her?’
Where can I find anyone to comfort you?”
8Are you better than Thebes,
situated on the Nile,
with water around her?
The river was her defense,
the waters her wall.
9Cusha and Egypt were her boundless strength;
Put and Libya were among her allies.
10Yet she was taken captive
and went into exile.
Her infants were dashed to pieces
at every street corner.
Lots were cast for her nobles,
and all her great men were put in chains.
11You too will become drunk;
you will go into hiding
and seek refuge from the enemy.
12All your fortresses are like fig trees
with their first ripe fruit;
when they are shaken,
the figs fall into the mouth of the eater.
13Look at your troops—
they are all weaklings.
The gates of your land
are wide open to your enemies;
fire has consumed the bars of your gates.
14Draw water for the siege,
strengthen your defenses!
Work the clay,
tread the mortar,
repair the brickwork!
15There the fire will consume you;
the sword will cut you down—
they will devour you like a swarm of locusts.
Multiply like grasshoppers,
multiply like locusts!
16You have increased the number of your merchants
till they are more numerous than the stars in the sky,
but like locusts they strip the land
and then fly away.
17Your guards are like locusts,
your officials like swarms of locusts
that settle in the walls on a cold day—
but when the sun appears they fly away,
and no one knows where.
18King of Assyria, your shepherdsb slumber;
your nobles lie down to rest.
Your people are scattered on the mountains
with no one to gather them.
19Nothing can heal you;
your wound is fatal.
All who hear the news about you
clap their hands at your fall,
for who has not felt
your endless cruelty?

3:1-7 When proud sinners are brought down, others should learn not to lift themselves up. The fall of this great city should be a lesson to private persons, who increase wealth by fraud and oppression. They are preparing enemies for themselves; and If The Lord Sees good to punish them in this world, they will have none to pity them. Every man who seeks his own prosperity, safety, and peace, should not only act in an upright, honorable manner, but also with kindness to all.

3:8-19 Strong-holds, even the strongest, are no defense against The Judgments of GOD. They shall be unable to do anything for themselves. The Chaldeans and Medes would devour the land like canker-worms. The Assyrians also would be eaten up by their own numerous hired troops, which seem to be meant by the word rendered merchants. Those that have done evil to their neighbors, will find it come home to them.

Nineveh, and many other cities, states, and empires, have been ruined, and should be a warning to us. Are we better, except as there are some true Christians amongst us, who are a greater security, and a stronger defense, than all the advantages of situation or strength? When The LORD Shows HIMSELF against a people, everything they trust in must fail, or prove a disadvantage; but HE Continues To Do good to Israel. HE Is a strong-hold for every believer in time of trouble that cannot be stormed or taken; and HE Knows those who trust in HIM.

The Destruction Of Nineveh
by David Padfield

The city of Nineveh, the ancient capital of the Assyrian Empire, was destroyed in 612 B.C. The fall of that great city was not a matter of chance, but rather a fulfillment of Bible prophecy.

Nineveh was established by Nimrod, "the mighty hunter" (Gen. 10:8-10). It served as the capitol of the Assyrian Empire for many years. For years skeptics questioned the existence of the city since it could not be found. However, British archeologist A. H. Layard excavated the site in 1845-1854. He unearthed the great palace of King Sargon along with a library of over 22,000 cuneiform documents. King Sargon was mentioned by Isaiah the prophet (Isa. 20:1).

"In Sennacherib's day the wall around Nineveh was 40 to 50 feet high. It extended for 4 kilometers along the Tigris River and for 13 kilometers around the inner city. The city wall had 15 main gates, 5 of which have been excavated. Each of the gates was guarded by stone bull statues. Both inside and outside the walls, Sennacherib created parks, a botanical garden, and a zoo. He built a water-system containing the oldest aqueduct in history at Jerwan, across the Gomel River." (Nelson's Bible Dictionary, p. 760). The prophet Jonah had gone to Nineveh and preached, saying, "Yet forty days, and Nineveh shall be overthrown!" (Jonah 3:4). The record tells us "the people of Nineveh believed GOD, proclaimed a fast, and put on sackcloth, from the greatest to the least of them" (Jonah 3:5). In response to one of the greatest stories of repentance in history, "GOD Saw their works, that they turned from their evil way; and GOD Relented from the disaster that HE Had Said HE Would Bring Upon them, and HE Did Not Do it" (Jonah 3:10). 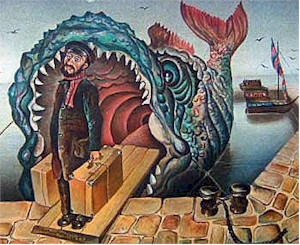 The Assyrian Empire began a quest for world domination under Tiglath-pileser III in 745 B.C. He invaded northern Israel and deported some of the inhabitants to the region around Nineveh. Sargon II completed the siege of Samaria that had been started by Shalmaneser V in 722 B.C. Later, Sennacherib shut up King Hezekiah in Jerusalem "as a bird in a cage." Ashurbanipal led a campaign into Egypt and caused the downfall of Thebes (called No-amon in Nahum 3:8).

The Assyrian Empire was known for its cruelty. "Judged from the vaunting inscriptions of her kings, no power more useless, more savage, more terrible, ever cast its gigantic shadow on the page of history as it passed on the way to ruin. The kings of Assyria tormented the miserable world. They exult to record how 'space failed for corpses'; how unsparing a destroyer is their goddess Ishtar; how they flung away the bodies of soldiers like so much clay; how they made pyramids of human heads; how they burned cities; how they filled populous lands with death and devastation; how they reddened broad deserts with carnage of warriors; how they scattered whole countries with the corpses of their defenders as with chaff; how they impaled 'heaps of men' on stakes, and strewed the mountains and choked rivers with dead bones; how they cut off the hands of kings and nailed them on the walls, and left their bodies to rot with bears and dogs on the entrance gates of cities; how they employed nations of captives in making brick in fetters; how they cut down warriors like weeds, or smote them like wild beasts in the forests, and covered pillars with the flayed skins of rival monarchs." (Farrar, The Minor Prophets, pp. 147,148).

2.      Nineveh would be destroyed while her inhabitants were "drunken like drunkards" (Nah. 1:10)

5.      The downfall of Nineveh would come with remarkable ease, like figs falling when the tree is shaken (Nah. 3:12)

In 612 B.C. Nabopolassar united the Babylonian army with an army of Medes and Scythians and led a campaign which captured the Assyrian citadels in the North. The Babylonian army laid siege to Nineveh, but the walls of the city were too strong for battering rams, so they decided to try and starve the people out. A famous oracle had been given that "Nineveh should never be taken until the river became its enemy." After a three month siege, "rain fell in such abundance that the waters of the Tigris inundated part of the city and overturned one of its walls for a distance of twenty stades. Then the King, convinced that the oracle was accomplished and despairing of any means of escape, to avoid falling alive into the enemy's hands constructed in his palace an immense funeral pyre, placed on it his gold and silver and his royal robes, and then, shutting himself up with his wives and eunuchs in a chamber formed in the midst of the pile, disappeared in the flames. Nineveh opened its gates to the besiegers, but this tardy submission did not save the proud city. It was pillaged and burned, and then razed to the ground so completely as to evidence the implacable hatred enkindled in the minds of subject nations by the fierce and cruel Assyrian government." (Lenormant and E. Chevallier, The Rise and Fall of Assyria)

"Nineveh was laid waste as ruthlessly and completely as her kings had once ravaged Susa and Babylon; the city was put to the torch, the population was slaughtered or enslaved, and the palace so recently built by Ashurbanipal was sacked and destroyed. At one blow Assyria disappeared from history. Nothing remained of her except certain tactics and weapons of war ...The Near East remembered her for a while as a merciless unifier of a dozen lesser states; and the Jews recalled Nineveh vengefully as 'the bloody city, full of lies and robbery.' In a little while all but the mightiest of the great kings were forgotten, and all their royal palaces were in ruins under the drifting sands. Two hundred years after its capture, Xenophon's Ten Thousand marched over the mounds that had been Nineveh, and never suspected that these were the site of the ancient metropolis that had ruled half the world. Not a stone remained visible of all the temples with which Assyria's pious warriors had sought to beautify their greatest capital. Even Ashur, the everlasting god, was dead." (Will Durant, Our Oriental Heritage, pp. 283, 284).

What can we learn from Nineveh?

Matthew Henry summed it up when he wrote: "About a hundred years before, at Jonah's preaching, the Ninevites repented, and were spared, yet, soon after, they became worse than ever. Nineveh does not know that GOD WHO Contends With her, but is told What A GOD HE Is. It is good for all to mix faith with what is here said concerning HIM, which speaks great terror to the wicked, and comfort to believers. Let each take his portion from it: let sinners read it and tremble; and let saints read it and triumph. The Anger of The LORD Is Contrasted With HIS Goodness to HIS people. Perhaps they are obscure and little regarded in the world, but The LORD Knows them. The Scripture character of JEHOVAH Agrees Not With the views of proud reasoners."