1Then the whole assembly rose and led him off to Pilate. 2And they began to accuse HIM, saying, “We have found this man subverting our nation. HE Opposes payment of taxes to Caesar and claims to be MESSIAH, a KING.”

3So Pilate asked JESUS, “Are YOU The KING of the Jews?”

“You have said So,” JESUS Replied.

4Then Pilate announced to the chief priests and the crowd, “I find no basis for a charge against this man.”

5But they insisted, “HE Stirs Up the people all over Judea by HIS Teaching. HE Started in Galilee and Has Come all the way here.”

6On hearing this, Pilate asked if the man was a Galilean. 7When he learned that JESUS Was under Herod’s jurisdiction, he sent HIM to Herod, who was also in Jerusalem at that time.

8When Herod saw JESUS, he was greatly pleased, because for a long time he had been wanting to see HIM. From what he had heard about HIM, he hoped to see HIM perform a sign of some sort. 9He plied HIM with many questions, but JESUS Gave him no answer. 10The chief priests and the teachers of the Law were standing there, vehemently accusing HIM. 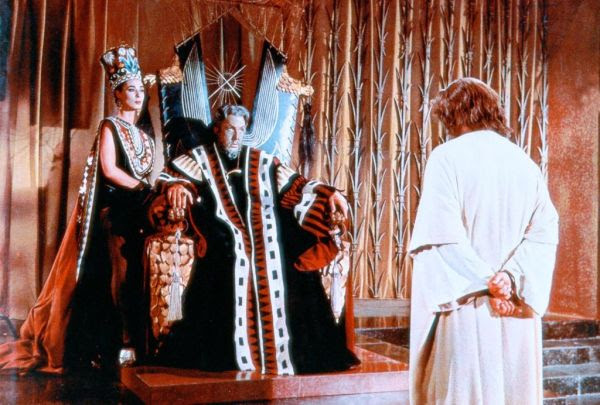 11Then Herod and his soldiers ridiculed and mocked HIM. Dressing HIM in an elegant robe, they sent HIM back to Pilate. 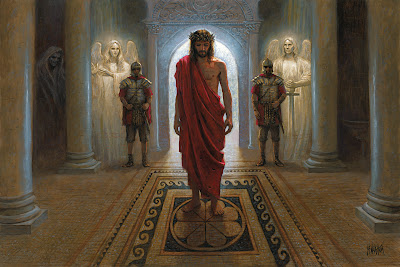 12 That day Herod and Pilate became friends—before this they had been enemies.

13Pilate called together the chief priests, the rulers and the people, 14and said to them, “You brought me this man as one who was inciting the people to rebellion. I have examined HIM in your presence and have found no basis for your charges against HIM. 15Neither has Herod, for he sent HIM back to us; as you can see, HE Has Done Nothing to Deserve death. 16Therefore, I will punish HIM and then release HIM.” [17]a

18But the whole crowd shouted, “Away with this Man! Release Barabbas to us!” 19(Barabbas had been thrown into prison for an insurrection in the city, and for murder.)

20Wanting to release JESUS, Pilate appealed to them again. 21But they kept shouting,

22For the third time he spoke to them: “Why? What crime has this man committed? 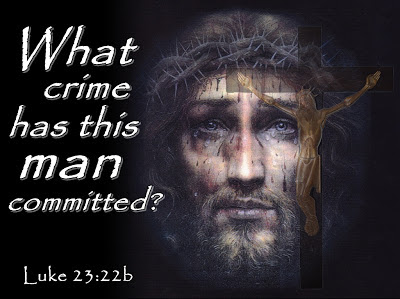 I have found in HIM no grounds for the death penalty. Therefore I will have HIM Punished and then release HIM.”

23But with loud shouts they insistently demanded that HE Be Crucified, and their shouts prevailed. 24So Pilate decided to grant their demand. 25He released the man who had been thrown into prison for insurrection and murder, the one they asked for, and surrendered JESUS to their will.


The Crucifixion of JESUS


26As the soldiers led HIM away, they seized Simon from Cyrene, who was on his way in from the country, and put the cross on him and made him carry it behind JESUS. 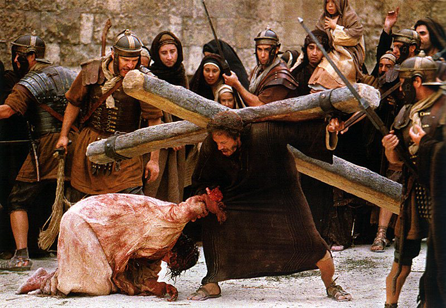 27A large number of people followed HIM, including women who mourned and wailed for HIM. 28JESUS Turned and Said to them,

“Daughters of Jerusalem, do not weep for ME; weep for yourselves and for your children.


29For the time will come when you will say, ‘Blessed are the childless women, the wombs that never bore and the breasts that never nursed!’

31For if people do these things when the tree is green, what will happen when it is dry?”

32Two other men, both criminals, were also led out with him to be executed. 33When they came to the place called the Skull, they crucified HIM there, along with the criminals—one on HIS right, the other on HIS left.

“FATHER, Forgive them, for they do not know what they are doing.” 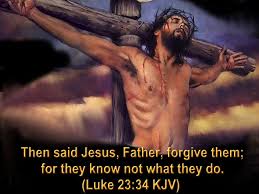 And they divided up HIS Clothes by casting lots.

35The people stood watching, and the rulers even sneered at HIM. They said, “HE Saved others; let HIM Save Himself If HE Is GOD’S MESSIAH, The Chosen ONE.”

36The soldiers also came up and mocked HIM. They offered HIM wine vinegar 37and said,

“If YOU Are The KING of the Jews, Save YOURSELF.”

38There was a written notice above HIM, which read:


THIS IS THE KING OF THE JEWS.

39One of the criminals who hung there hurled insults at HIM: “Aren’t YOU The MESSIAH? Save YOURSELF and us!”

40But the other criminal rebuked him. “Don’t you fear GOD,” he said, “since you are under the same sentence? 41We are punished justly, for we are getting what our deeds deserve. But This Man Has Done nothing wrong.”

“JESUS, Remember me when YOU Come into YOUR KINGDOM. ” 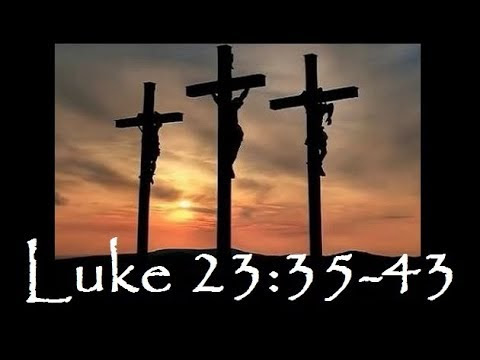 “Truly I Tell you, today you will be with ME in Paradise.”

The Death of JESUS


44It was now about noon, and darkness came over the whole land until three in the afternoon, 45for the sun stopped shining. And the curtain of the Temple was torn in two.


46JESUS Called Out with a loud voice,

“FATHER, Into YOUR Hands I Commit MY SPIRIT.” 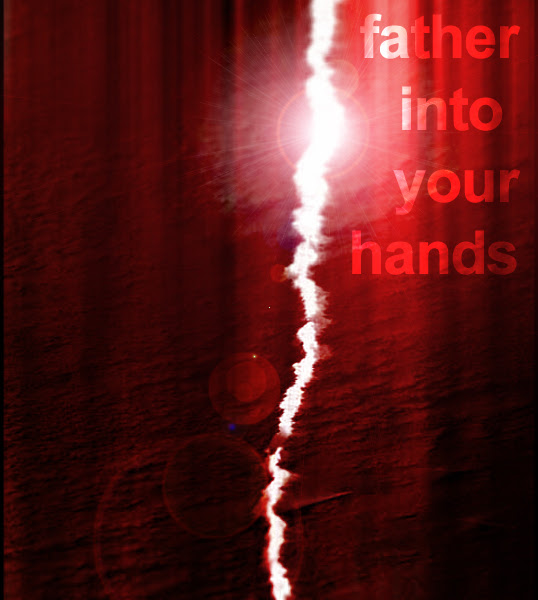 When HE Had Said this, HE Breathed HIS Last. 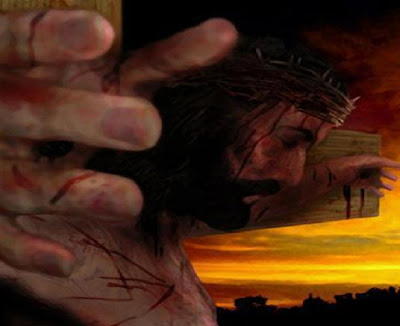 47The centurion, seeing what had happened, praised GOD and said,

“Surely This Was a Righteous Man.”


48When all the people who had gathered to witness this sight saw what took place, they beat their breasts and went away. 49But all those who knew HIM, including the women who had followed HIM from Galilee, stood at a distance, watching these things.

The Burial of JESUS


50Now there was a man named Joseph, a member of the Council, a good and upright man, 51who had not consented to their decision and action. He came from the Judean town of Arimathea, and he himself was waiting for The KINGDOM of GOD. 52Going to Pilate, he asked for JESUS’ Body. 53Then he took it down, wrapped it in linen cloth and placed it in a tomb cut in the rock, one in which no one had yet been laid. 54It was Preparation Day, and the Sabbath was about to begin.

55The women who had come with JESUS from Galilee followed Joseph and saw the tomb and how HIS Body Was Laid in it. 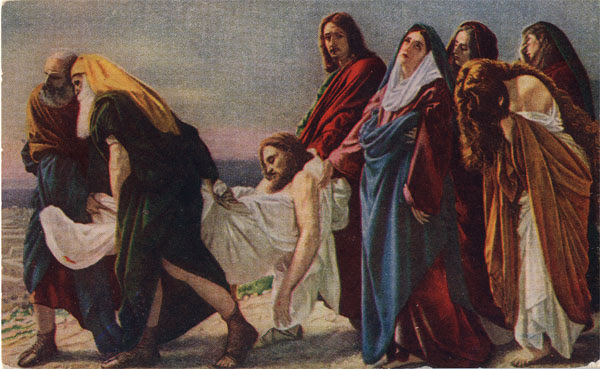 56Then they went home and prepared spices and perfumes. But they rested on the Sabbath in obedience to the commandment.

Today you will be with ME in Paradise


It is common knowledge that punctuation, including commas, was introduced into the Biblical manuscripts centuries after the books were completed. Therefore, commas are not authoritative.


However, the placement of commas can affect our understanding of a text. For example, in Luke 23, one of the thieves crucified next to JESUS says, “‘JESUS, Remember me when YOU Come Into YOUR KINGDOM.’ JESUS Answered him, ‘I Tell you the truth, today you will be with ME in paradise’” (verses 42-43).


First, we note that every major Bible translation inserts the comma before the word today. Thus, the KJV, NKJV, NASB, NIV, ESV, and RSV all agree that JESUS Was Speaking of the time that the thief would enter paradise. The thief would be in paradise with JESUS on that very same day.


Also, JESUS Prefaced HIS Response with the phrase, “I Tell you the truth” (“Verily I Say unto thee” in the KJV). Many scholars have noticed that JESUS Uses this as a prefix phrase when HE Is about to Say something that should be listened to with care. Seventy-six times in the New Testament, JESUS Uses the phrase. Interestingly, no one but JESUS ever Says it. When The LORD says “I Tell you the truth,” HE Is Affirming that what HE Is About To Say is worthy of special attention. It was JESUS’ Way of Saying, “Listen up! What I’M About To Say is very important and should be listened to carefully.” We’re too used to hearing the phrase to appreciate the astonishing authority it expresses and the often solemn nature of the announcement that follows. In every one of the 76 times CHRIST Uses this introductory phrase, HE simply Says it and then Makes a startling statement.


It would be strange indeed if, in this one instance, JESUS Departed from HIS normal way of Making HIS signature statement by Adding the word today to it. In every case where this sort of introductory phrase is used, Greek scholars add a punctuation break after the phrase in question and before the rest of the statement. So, the translators have it right. The comma in Luke 23:43 belongs where they put it.


This brings us to another question. If JESUS Was Buried and Rose after three days and then many days later Ascended to heaven, How Could HE Have Been in paradise with the thief?


After CHRIST Died, it was HIS Body that Was Buried in the tomb. However, JESUS’ SPIRIT/SOUL Was not in the tomb. JESUS’ SPIRIT Was in the FATHER’S Presence (Luke 23:46; Ephesians 4:8). See more information in our article here.


As JESUS Was Hanging on the cross, Paying our penalty for sin, HE Made a promise to a dying, repentant thief.  By The Grace of GOD and The Power of CHRIST, that promise was kept. The thief’s sins were washed away, and his death that day was his entrance to paradise.