2“Command the Israelites and say to them:

‘When you enter Canaan, the land that will be allotted to you as an inheritance is to have these boundaries:

3“ ‘Your southern side will include some of the Desert of Zin along the border of Edom. Your southern boundary will start in the east from the southern end of the Dead Sea, 4cross south of Scorpion Pass, continue on to Zin and go south of Kadesh Barnea. Then it will go to Hazar Addar and over to Azmon, 5where it will turn, join the Wadi of Egypt and end at the Mediterranean Sea.

6“ ‘Your western boundary will be the coast of the Mediterranean Sea. This will be your boundary on the west.

7“ ‘For your northern boundary, run a line from the Mediterranean Sea to Mount Hor 8and from Mount Hor to Lebo Hamath. Then the boundary will go to Zedad, 9continue to Ziphron and end at Hazar Enan. This will be your boundary on the north.


“ ‘This will be your land, with its boundaries on every side.’ ” 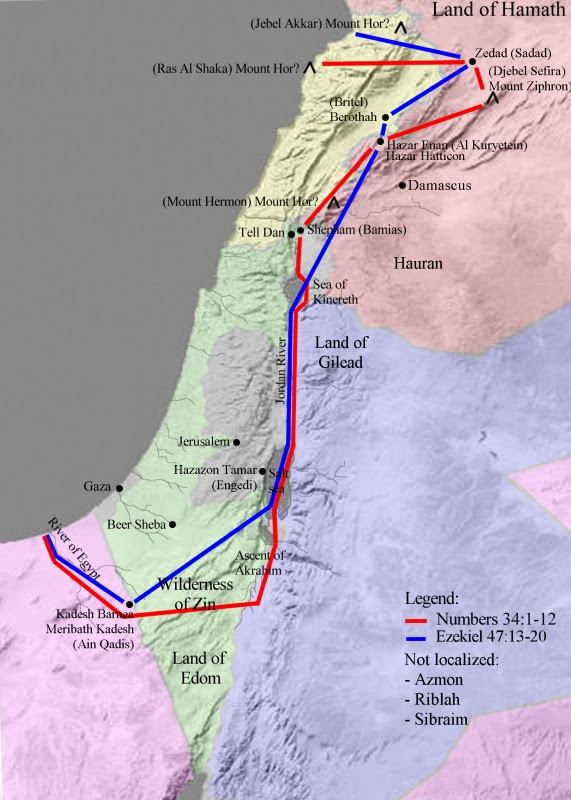 16The LORD Said To Moses,


17“These are the names of the men who are to assign the land for you as an inheritance: Eleazar the priest and Joshua son of Nun. 18And appoint one leader from each tribe to help assign the land.

19These are their names:


29These are the men The LORD Commanded to assign the inheritance to the Israelites in the land of Canaan.