CHRIST Is Our City Of Refuge


Towns for the Levites

1On the plains of Moab by the Jordan across from Jericho,


The LORD Said To Moses,

9Then The LORD Said To Moses,


‘When you cross the Jordan into Canaan, 11select some towns to be your cities of refuge, to which a person who has killed someone accidentally may flee. 12They will be places of refuge from the avenger, so that anyone accused of murder may not die before they stand trial before the assembly. 13These six towns you give will be your cities of refuge. 14Give three on this side of the Jordan and three in Canaan as cities of refuge. 15These six towns will be a place of refuge for Israelites and for foreigners residing among them, so that anyone who has killed another accidentally can flee there.

22“ ‘But if without enmity someone suddenly pushes another or throws something at them unintentionally 23or, without seeing them, drops on them a stone heavy enough to kill them, and they die, then since that other person was not an enemy and no harm was intended, 24the assembly must judge between the accused and the avenger of blood according to these regulations. 25The assembly must protect the one accused of murder from the avenger of blood and send the accused back to the city of refuge to which they fled.

The accused must stay there until the death of the high priest, who was anointed with the holy oil.

26“ ‘But if the accused ever goes outside the limits of the city of refuge to which they fled 27and the avenger of blood finds them outside the city, the avenger of blood may kill the accused without being guilty of murder. 28The accused must stay in the city of refuge until the death of the high priest; only after the death of the high priest may they return to their own property.

29“ ‘This is to have the force of law for you throughout the generations to come, wherever you live.

31“ ‘Do not accept a ransom for the life of a murderer, who deserves to die. They are to be put to death.

32“ ‘Do not accept a ransom for anyone who has fled to a city of refuge and so allow them to go back and live on their own land before the death of the high priest.

33“ ‘Do not pollute the land where you are. Bloodshed pollutes the land, and atonement cannot be made for the land on which blood has been shed, except by the blood of the one who shed it.

34 Do not defile the land where you live and Where I Dwell, For I, The LORD, Dwell Among the Israelites.’ ” 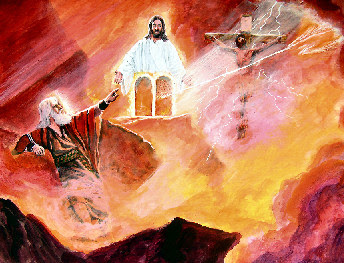 A safe place to flee for a person who had accidentally killed another. The city provided asylum to the fugitive by sheltering and protecting him until a trial could be held to determine his guilt or innocence. If, in the judgment of the city elders, the death had occurred accidentally and without intent, the man was allowed to stay there without fear of harm or revenge by the dead man's relatives (Joshua 20:2-6 ).

Four major passages in the Old Testament describe the right of asylum and the sanctuary provided by a city of refuge (Exodus 21:12-14 ;Numbers 35:1-34 ; Deuteronomy 19:1-13 ; Joshua 20:1-9 ). A literal translation of the Hebrew phrase means “a city of intaking.” This right of asylum was offered before the settlement of the Promised Land, but was available only to one charged with accidental manslaughter. Exodus 21:12 records that “He that smites a man, so that he die, shall be surely put to death.” The passage continues, however, to promise that “if a man did lie not in wait,” a place would be designated to which he could flee ( Exodus 21:13 ).


Prior to the establishment of these cities, temporary safety could be gained by fleeing to a sanctuary and grasping the horns of the altar there. 1 Kings 1:50 and 1 Kings 2:28 record two examples of men seeking safety by clinging to the altar in Jerusalem. Neither Adonijah nor Joab were innocent, though, and later were executed.

Moses was commanded to establish six cities of refuge from the total of 48 given to the Levites (Numbers 35:6-7 ). Three were located on each side of the Jordan. In the east were Bezer in the territory of the Reubenites, Ramoth in Gilead, and Golan in the area of Bashan (Deuteronomy 4:43 ). On the west side of the Jordan were Kedesh in Galilee, Shechem in Ephraim, and Kirjath-arba or Hebron in the hill country of Judah (Joshua 20:7-8 ). Sanctuary was not limited to the people of Israel but was extended to the stranger and sojourner among them (Numbers 35:15 ).

The Old Testament reveals the importance and sacredness of human life by its laws regarding the taking of life. Every shedding of blood, even that committed accidentally, required purification because it polluted the land in which YAHWEH Lived With His people (Numbers 35:33-34 ). Leviticus 24:20 records that “he that kills a man, he shall be put to death.” No sacrifice was available to atone for this crime, nor could a ransom be offered by relatives for the release of one guilty of murder.

Two exceptions were allowed. One was for the person guilty of an accidental death who sought sanctuary in a city of refuge. The second was in the case of a murder committed in the open country by someone unknown. Deuteronomy assigns the responsibility of atoning for the unknown death to the elders and judges of the nearest city. Only The LORD Could Purge the guilt from their midst. The elders prayed on behalf of the community, “Be merciful, O LORD, to Thy people Israel, whom Thou Have Redeemed, and Lay not innocent blood to thy people of Israel's charge. And the blood shall be forgiven them” ( Deuteronomy 21:8 ).

The death of a person who did not deserve to die was called “innocent blood” (Deuteronomy 19:10 ). The next of kin (brother, son, father, uncle) of the dead person was responsible for avenging his death. This kinsman was referred to as the “kinsman redeemer” or the “avenger of blood.” This concept of an “avenger of blood” was closely tied to the law of “eye for eye, tooth for tooth” (Exodus 21:23 ; Leviticus 24:20 ). While this law seems harsh, it represented a limitation of the vengeance that could be taken. It can be interpreted, “only an eye for an eye” or “nor more than an eye for an eye.”

The reason for distributing the cities of refuge throughout Israel on both sides of the Jordan was so that a city was easily accessible to a person responsible for an accidental homicide. He needed to find asylum immediately because he would be pursued by a member of the dead man's family. The avenger of blood sought to kill the slayer of his kin for the harm done to the family or clan. In the early period of Israel's history before the development of the cities of refuge, this action could result in a blood feud that terminated only with the extinction of one family. The establishment of the cities of refuge served a humanitarian purpose by transforming a case of homicide from a private feud between two families to a judicial matter settled by a group of elders.

Upon reaching one of the cities of refuge, the slayer stood at the gates and presented his case to the elders of the city (Joshua 20:4 ). If the elders decided that the man murdered his neighbor with intent to do so, they were required to hand him over to the avenger of blood, who would kill him. The avenger was protected from punishment for this action (Numbers 35:27 ). The elders, as representatives of the congregation, were responsible for exercising judgment between the manslayer and the avenger of blood.

Numbers 35:1 lists several requirements to be met prior to seeking sanctuary in a city of refuge. The primary requisite was that the death must have occurred by accident, without premeditation or intent. Case studies are presented in Numbers 35:16-18 , Numbers 35:20-21 , Numbers 35:22-23 to provide examples of those incidents which prevented or allowed a slayer to seek refuge in such a place. The first two passages describe unacceptable reasons for seeking asylum. The use of a weapon made of iron, stone, or wood constituted murder. Striking a man from an ambush, or stabbing or striking him in hatred so that death occurred also constituted murder. Numbers 35:22-23 describe an accidental death. If a man stabbed another without hatred or without lying in wait, or if he threw a stone without seeing him and the person was killed, the death occurred without intent.

The Book of Deuteronomy also provides examples. If a man hates his neighbor and attacks him from an ambush and kills him, the man is guilty of murder. If two men are chopping wood in a forest and the ax head falls from one man's ax and kills his neighbor, the death occurred without intent. For a person to be able to find sanctuary in a city of refuge, the homicide must have occurred without premeditation, hatred, use of a weapon, or ambush.

A second major requirement for asylum in a city of refuge was that the slayer, once being admitted to the city, could not leave until the death of the high priest (Numbers 35:25 ; Joshua 20:6 ). If he chose to the leave the city before that time, he could be killed by the avenger of blood (Numbers 35:26-28 ). In contrast to the temporary sanctuary offered by grasping the horns of an altar, the city of refuge provided a permanent place of asylum for the manslayer. In a punitive way, the city also served as a place of detention. The manslayer was not guiltless. He could not leave under penalty of death by the avenger of blood, nor could he buy his way out by offering a ransom to the relatives of the deceased. A similar example of this punishment may be found in Solomon's confinement of Shimei to Jerusalem under a death threat if he left the city (1 Kings 2:36-46 )

The taking of a life imposed a guilt that could not be paid for by any means short of death. The death of the high priest, even as a result of natural causes, served to pay the price of the required penalty. One man died in place of another. During his life, one of the functions of a high priest was to bear the sins of the people (Exodus 28:38 ). In accordance with this regulation, all the cities of refuge were Levitical cities, given to that tribe during the division of the Promised Land among the Israelites. These locations probably contained local sanctuaries in which a priest served. After the death of the high priest, the one guilty of manslaughter was free to leave the city and return to his home without fear of the avenger of blood.

The establishment of the cities of refuge provided safety for one guilty of killing another accidentally. This represented an improvement over the system of vengeance by affording the opportunity for the elders and judges of the city to stand between the slayer and the avenger. This right of asylum served to limit the rights of the avenger of blood, perhaps because “in hot anger” he might not be able to distinguish between murder and unintentional killing.