JESUS Says, "You Cannot Serve Both GOD And Money"

1Now the Ephraimites asked Gideon, “Why have you treated us like this? Why didn’t you call us when you went to fight Midian?” And they challenged him vigorously.

2But he answered them, “What have I accomplished compared to you? Aren’t the gleanings of Ephraim’s grapes better than the full grape harvest of Abiezer? 3GOD Gave Oreb and Zeeb, the Midianite leaders, into your hands. What was I able to do compared to you?” At this, their resentment against him subsided. 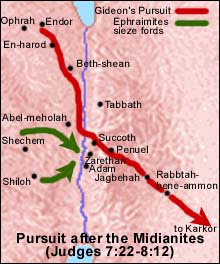 4Gideon and his three hundred men, exhausted yet keeping up the pursuit, came to the Jordan and crossed it. 5He said to the men of Sukkoth, “Give my troops some bread; they are worn out, and I am still pursuing Zebah and Zalmunna, the kings of Midian.”

6But the officials of Sukkoth said, “Do you already have the hands of Zebah and Zalmunna in your possession? Why should we give bread to your troops?” 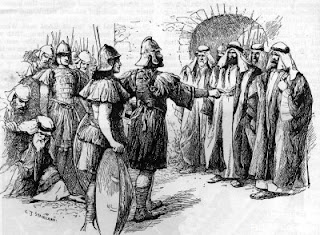 7Then Gideon replied, “Just for that, When The LORD Has Given Zebah and Zalmunna into my hand, I will tear your flesh with desert thorns and briers.”

8From there he went up to Peniela and made the same request of them, but they answered as the men of Sukkoth had. 9So he said to the men of Peniel, “When I return in triumph, I will tear down this tower.”

10Now Zebah and Zalmunna were in Karkor with a force of about fifteen thousand men, all that were left of the armies of the eastern peoples; a hundred and twenty thousand swordsmen had fallen. 11Gideon went up by the route of the nomads east of Nobah and Jogbehah and attacked the unsuspecting army. 12Zebah and Zalmunna, the two kings of Midian, fled, but he pursued them and captured them, routing their entire army.

13Gideon son of Joash then returned from the battle by the Pass of Heres. 14He caught a young man of Sukkoth and questioned him, and the young man wrote down for him the names of the seventy-seven officials of Sukkoth, the elders of the town. 15Then Gideon came and said to the men of Sukkoth, “Here are Zebah and Zalmunna, about whom you taunted me by saying, ‘Do you already have the hands of Zebah and Zalmunna in your possession? Why should we give bread to your exhausted men?’ ”

16He took the elders of the town and taught the men of Sukkoth a lesson by punishing them with desert thorns and briers. 17He also pulled down the tower of Peniel and killed the men of the town.

18Then he asked Zebah and Zalmunna, “What kind of men did you kill at Tabor?”

“Men like you,” they answered, “each one with the bearing of a prince.”

19Gideon replied, “Those were my brothers, the sons of my own mother. As surely as The LORD Lives, if you had spared their lives, I would not kill you.”

20Turning to Jether, his oldest son, he said, “Kill them!” But Jether did not draw his sword, because he was only a boy and was afraid.

21Zebah and Zalmunna said, “Come, do it yourself. ‘As is the man, so is his strength.’ ” So Gideon stepped forward and killed them, and took the ornaments off their camels’ necks.

22The Israelites said to Gideon, “Rule over us—you, your son and your grandson—because you have saved us from the hand of Midian.”

23But Gideon told them, “I will not rule over you, nor will my son rule over you. The LORD Will Rule Over you.”24And he said, “I do have one request, that each of you give me an earring from your share of the plunder.” (It was the custom of the Ishmaelites to wear gold earrings.)

25They answered, “We’ll be glad to give them.” So they spread out a garment, and each of them threw a ring from his plunder onto it. 26The weight of the gold rings he asked for came to seventeen hundred shekels,b not counting the ornaments, the pendants and the purple garments worn by the kings of Midian or the chains that were on their camels’ necks. 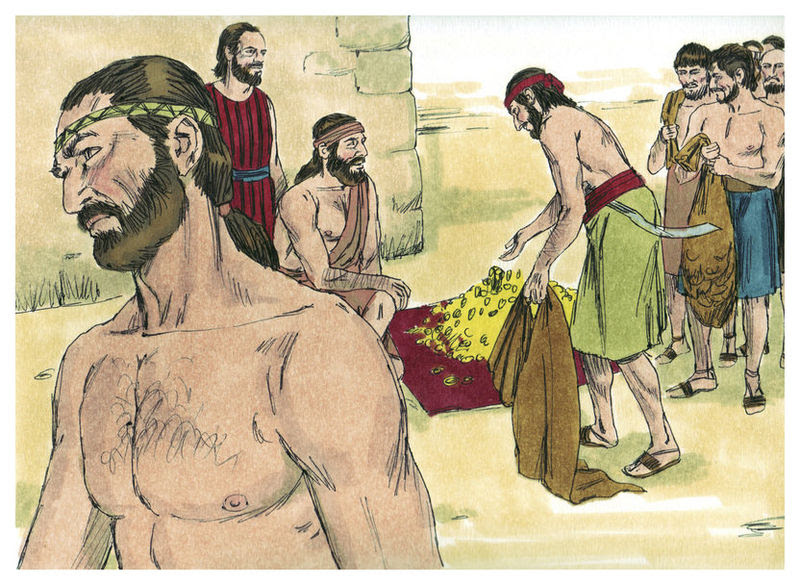 27 Gideon made the gold into an ephod, which he placed in Ophrah, his town. All Israel prostituted themselves by worshiping it there, and it became a snare to Gideon and his family. 28Thus Midian was subdued before the Israelites and did not raise its head again. During Gideon’s lifetime, the land had peace forty years.

29Jerub-Baal son of Joash went back home to live. 30He had seventy sons of his own, for he had many wives. 31His concubine, who lived in Shechem, also bore him a son, whom he named Abimelek. 32Gideon son of Joash died at a good old age and was buried in the tomb of his father Joash in Ophrah of the Abiezrites.

33No sooner had Gideon died than the Israelites again prostituted themselves to the Baals. They set up Baal-Berith as their god 34 and did not remember The LORD their GOD, Who Had Rescued them from the hands of all their enemies on every side.

35They also failed to show any loyalty to the family of Jerub-Baal (that is, Gideon) in spite of all the good things he had done for them.

Taking the gold isn't wrong. It is appropriate to reward the courageous commander of a successful military victory. The problem comes with what Gideon does with the gold. Money is like that. Money is a neutral element. It is in how we hoard it and in how we spend it that sin creeps in.

"Gideon made the gold into an ephod, which he placed in Ophrah, his town. All Israel prostituted themselves by worshiping it there, and it became a snare to Gideon and his family." (8:27)

"Ephod" is a transliteration of the Hebrew noun ΄ēpôd, and seems to refer to a sacred garment, though there is a lot of scholarly speculation. The word occurs 48 times in the Old Testament with parallels in Assyrian, Ugaritic, and Cappadocian texts. In the Old Testament the word is used of the high priest's garment (Exodus 28, 39). Others who wore less extravagant linen ephods were Samuel (1 Samuel 2:18), priests (1 Samuel 22:18), and David (2 Samuel 6:14). Sometimes the Urim and Thummim in the high priest's ephod were used for determining The Will of GOD. In periods of idolatry, sometimes the ephod is mentioned alongside teraphim and graven images (Judges 17:5; 18:14, 15, 17, 20; Hosea 3:4).

In ancient Egypt and Mesopotamia, golden garments were reserved to clothe either statues of the gods or a select group of high officials -- royalty and top priestly ranks. "Golden garments," used to clothe the statues of deities in Mesopotamia, were thought possess in themselves a kind of sanctity. These were apparently used in rituals meant to secure the god's or goddess's presence and availability." Perhaps the high priest's ephod when not used was hung on a wall or placed on a stand, possibly of roughly human shape, which may explain Gideon's golden ephod.

Gideon wouldn't have intentionally created an idol; he had torn down Canaanite idols to Baal and Astarte (6:28). But the precious golden garment he created was an abomination. It appears to substitute for the ephod reserved for the high priest's use only, and may have set Gideon up as a seer to determine GOD's Will for Israel instead of the high priest. And even if Gideon didn't worship the ephod as an idol, certainly many worshiped it as such. The ephod in Ophrah became a source of sin.

"Gideon made the gold into an ephod, which he placed in Ophrah, his town. All Israel prostituted themselves by worshiping it there, and it became a snare to Gideon and his family." (8:27)

Spiritual Snares that Divert our Focus

Not only does Israel begin to worship Gideon's ephod as an idol, it also ensnares Gideon and his family. Gideon's father had been the caretaker of Baal's altar in Ophrah (6:25). Now Gideon and his family become caretakers of a new object of worship. Rather than serving the Invisible GOD, they focus their attentions on caring for the golden ephod which draws many pilgrim worshipers -- with their money -- into the town.

Many cathedrals in Europe have been built from the offerings of worshipers who came to view and pray before the bones and relics of the saints. In the same way as Gideon's ephod, they became the focus of worship rather than the Invisible GOD HIMSELF. Maintaining and beautifying a church building has become the focus of many a church's energy rather than real worship and obedience to the Great Commission. Holy things need not be evil in and of themselves. But they can become snares unless we guard against this very real possibility.

The entrapments today may not be literal idol worship. The New Testament identifies greed with idolatry (Colossians 3:5). Mammon or Money with a capital "M" can function in the same way to lure people away from pure devotion To GOD As JESUS Taught.

"No one can serve two masters. Either he will hate the one and love the other, or he will be devoted to the one and despise the other. You cannot serve both GOD and Money"

"The love of money is a root of all kinds of evil. Some people,

eager for money, have wandered from the faith and pierced

themselves with many griefs".