1When Jabin king of Hazor heard of this, he sent word to Jobab king of Madon, to the kings of Shimron and Akshaph, 2and to the northern kings who were in the mountains, in the Arabah south of Kinnereth, in the western foothills and in Naphoth Dor on the west; 3to the Canaanites in the east and west; to the Amorites, Hittites, Perizzites and Jebusites in the hill country; and to the Hivites below Hermon in the region of Mizpah.

4They came out with all their troops and a large number of horses and chariots—a huge army, as numerous as the sand on the seashore. 5All these kings joined forces and made camp together at the Waters of Merom to fight against Israel. 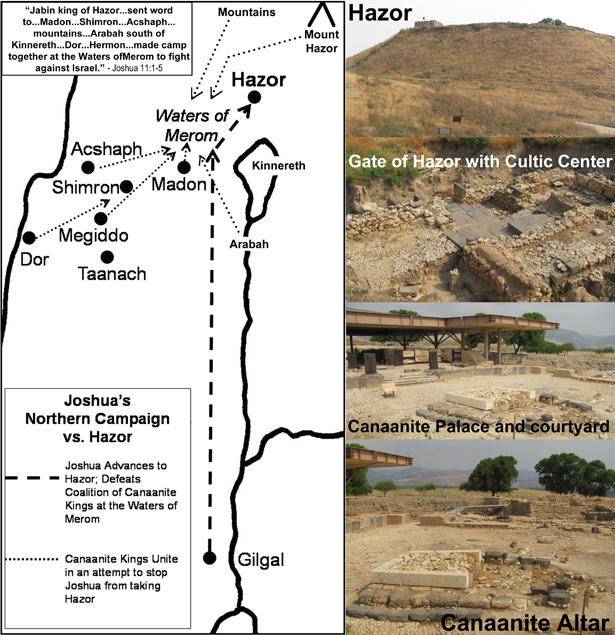 6The LORD Said To Joshua,

“Do not be afraid of them, because by this time

tomorrow I Will Hand all of them, slain, over to Israel.

You are to hamstring their horses and burn their

7So Joshua and his whole army came against them suddenly at the Waters of Merom and attacked them, 8And The LORD Gave them into the hand of Israel. They defeated them and pursued them all the way to Greater Sidon, to Misrephoth Maim, and to the Valley of Mizpah on the east, until no survivors were left. 9Joshua did to them As The LORD Had Directed: He hamstrung their horses and burned their chariots.

10At that time Joshua turned back and captured Hazor and put its king to the sword. (Hazor had been the head of all these kingdoms.) 11Everyone in it they put to the sword. They totally destroyed them, not sparing anyone that breathed, and he burned Hazor itself.

12Joshua took all these royal cities and their kings and put them to the sword. He totally destroyed them, as Moses the servant of The LORD had commanded. 13Yet Israel did not burn any of the cities built on their mounds—except Hazor, which Joshua burned. 14The Israelites carried off for themselves all the plunder and livestock of these cities, but all the people they put to the sword until they completely destroyed them, not sparing anyone that breathed. 15As The LORD Commanded HIS servant Moses, so Moses commanded Joshua, and Joshua did it; he left nothing undone of All That The LORD Commanded Moses.

16So Joshua took this entire land: the hill country, all the Negev, the whole region of Goshen, the western foothills, the Arabah and the mountains of Israel with their foothills, 17from Mount Halak, which rises toward Seir, to Baal Gad in the Valley of Lebanon below Mount Hermon. He captured all their kings and put them to death. 18Joshua waged war against all these kings for a long time. 19Except for the Hivites living in Gibeon, not one city made a treaty of peace with the Israelites, who took them all in battle.

20 For It Was The LORD HIMSELF WHO Hardened their

hearts to wage war against Israel, so that HE Might

Destroy them totally, exterminating them without

Mercy, As The LORD Had Commanded Moses.

22No Anakites were left in Israelite territory; only in Gaza, Gath and Ashdod did any survive.

23So Joshua took the entire land, Just As The LORD Had Directed Moses, and HE Gave it as an inheritance to Israel according to their tribal divisions. Then the land had rest from war.

The wonders GOD Wrought for the Israelites were to encourage them to act vigorously themselves. The war against satan's kingdom, carried on by preaching the Gospel, was at first forwarded by miracles; but being fully proved to be Of GOD, we are now left to the Divine Grace in the usual course, in the use of the Sword of The SPIRIT.

GOD Encouraged Joshua. Fresh dangers and difficulties make it necessary to seek fresh supports from The WORD of GOD, which we have near us for use in every time of need. GOD Proportions our trials to our strength, and our strength to our trials. Joshua's obedience in destroying the horses and chariots shows his self-denial in compliance with GOD'S Command. The possession of things on which the carnal heart is prone to depend, is harmful to the life of faith, and the walk With GOD; therefore it is better to be without worldly advantages, than to have the soul endangered by them.

The Canaanites filled up the measure of their iniquity, and were, as a judgment, left to the pride, obstinacy, and enmity of their hearts, and to the power of satan. They brought on themselves the vengeance they justly merited, of which the Israelites were to be executioners, by the Command The LORD Gave to Moses. The land rested from war. It ended not in a peace with the Canaanites, that was forbidden, but in a peace from them. There is a rest, a rest from war, remaining for the people of GOD, into which they shall enter, when their warfare is accomplished.

GOD'S WORD and HIS WORKS, if viewed together, will be found mutually to set each other forth. If we make conscience of our duty, we need not question the performance of the promise. But the believer must never put off his armor. As his strength increases, he may expect more heavy trials; yet The LORD Will Not Permit any enemies to assault the believer until HE Has Prepared him for the battle.

CHRIST JESUS Ever Lives To Plead For HIS people, and their faith shall not fail, however satan may be permitted to assault them. And however difficult the believer's warfare, his patience in tribulation may be encouraged by the joyfulness of hope; for he will before long, rest from sin and from sorrow in the Promised Land GOD Gives.