The Covenant Renewed At Mount Ebal

1Then The LORD Said To Joshua,

“Do not be afraid; do not be discouraged. Take the whole army with you, and go up and attack Ai. For I Have Delivered into your hands the king of Ai, his people, his city and his land. 2You shall do to Ai and its king as you did to Jericho and its king, except that you may carry off their plunder and livestock for yourselves. Set an ambush behind the city.”

3So Joshua and the whole army moved out to attack Ai. He chose thirty thousand of his best fighting men and sent them out at night 4with these orders: “Listen carefully. You are to set an ambush behind the city. Don’t go very far from it. All of you be on the alert. 5I and all those with me will advance on the city, and when the men come out against us, as they did before, we will flee from them. 6They will pursue us until we have lured them away from the city, for they will say, ‘They are running away from us as they did before.’ So when we flee from them, 7you are to rise up from ambush and take the city. The LORD your GOD Will Give it into your hand. 8When you have taken the city, set it on fire. Do What The LORD Has Commanded. See to it; you have my orders.”

9Then Joshua sent them off, and they went to the place of ambush and lay in wait between Bethel and Ai, to the west of Ai—but Joshua spent that night with the people.

10Early the next morning Joshua mustered his army, and he and the leaders of Israel marched before them to Ai. 11The entire force that was with him marched up and approached the city and arrived in front of it. They set up camp north of Ai, with the valley between them and the city. 12Joshua had taken about five thousand men and set them in ambush between Bethel and Ai, to the west of the city.13So the soldiers took up their positions—with the main camp to the north of the city and the ambush to the west of it. That night Joshua went into the valley.

14When the king of Ai saw this, he and all the men of the city hurried out early in the morning to meet Israel in battle at a certain place overlooking the Arabah. But he did not know that an ambush had been set against him behind the city. 15Joshua and all Israel let themselves be driven back before them, and they fled toward the wilderness. 16All the men of Ai were called to pursue them, and they pursued Joshua and were lured away from the city. 17Not a man remained in Ai or Bethel who did not go after Israel. They left the city open and went in pursuit of Israel.

18Then The LORD Said To Joshua,


“Hold out toward Ai the javelin that is in your hand, for into

your hand I Will Deliver the city.”


So Joshua held out toward the city the javelin that was in his hand. 19As soon as he did this, the men in the ambush rose quickly from their position and rushed forward. They entered the city and captured it and quickly set it on fire.

20The men of Ai looked back and saw the smoke of the city rising up into the sky, but they had no chance to escape in any direction; the Israelites who had been fleeing toward the wilderness had turned back against their pursuers. 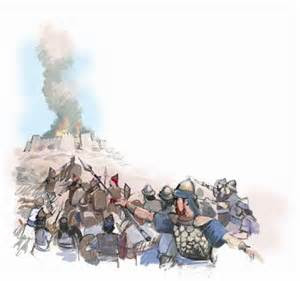 21For when Joshua and all Israel saw that the ambush had taken the city and that smoke was going up from it, they turned around and attacked the men of Ai.

22Those in the ambush also came out of the city against them, so that they were caught in the middle, with Israelites on both sides. Israel cut them down, leaving them neither survivors nor fugitives. 23But they took the king of Ai alive and brought him to Joshua.

24When Israel had finished killing all the men of Ai in the fields and in the wilderness where they had chased them, and when every one of them had been put to the sword, all the Israelites returned to Ai and killed those who were in it. 25Twelve thousand men and women fell that day—all the people of Ai. 26For Joshua did not draw back the hand that held out his javelin until he had destroyeda all who lived in Ai. 27But Israel did carry off for themselves the livestock and plunder of this city, As The LORD Had Instructed Joshua.


28So Joshua burned Aib and made it a permanent heap of ruins, a desolate place to this day. 29He impaled the body of the king of Ai on a pole and left it there until evening. At sunset, Joshua ordered them to take the body from the pole and throw it down at the entrance of the city gate. And they raised a large pile of rocks over it, which remains to this day.

The Covenant Renewed at Mount Ebal 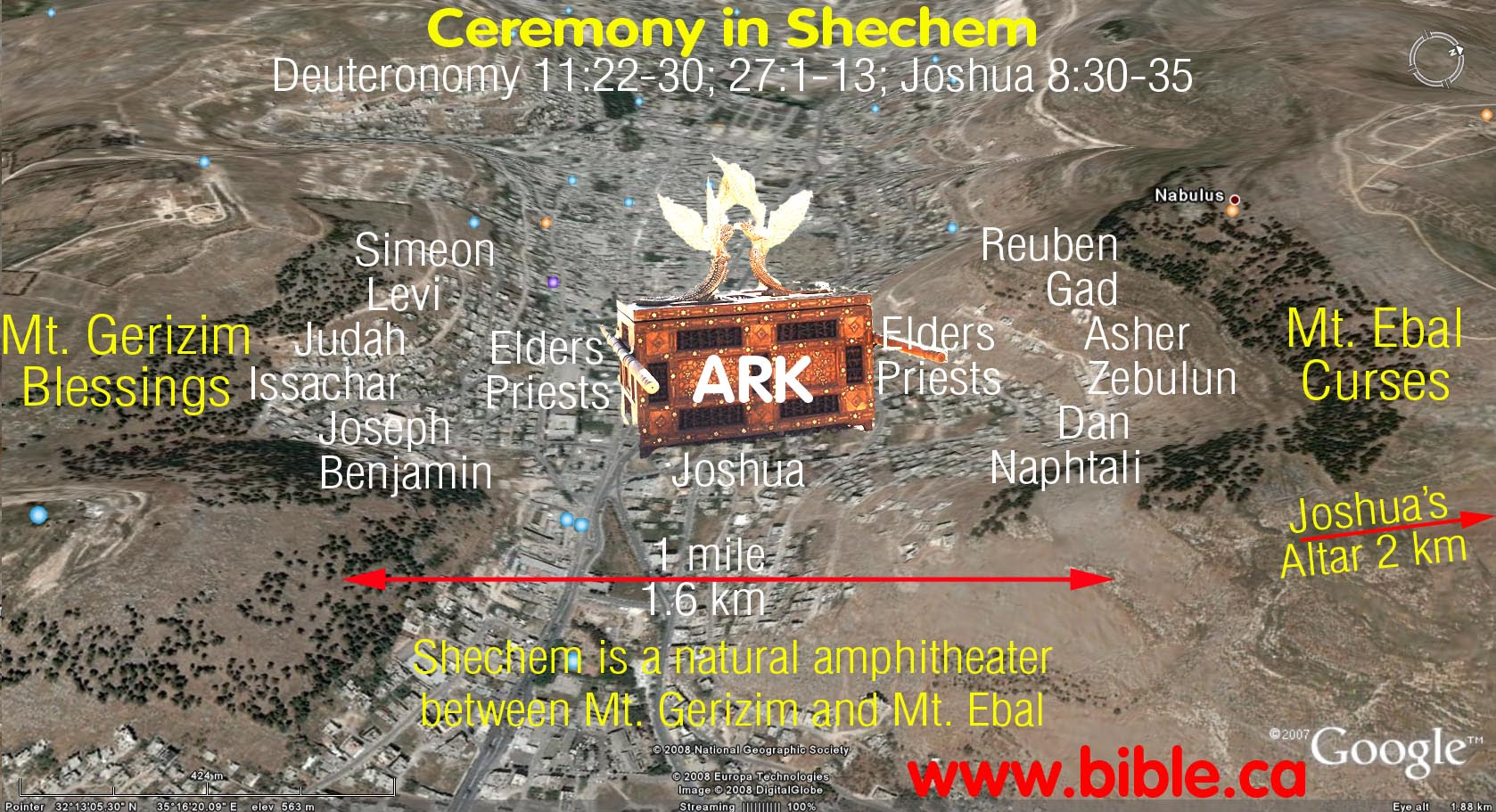 30Then Joshua built on Mount Ebal an altar To The LORD, The GOD of Israel,  31as Moses the servant of The LORD had commanded the Israelites. He built it according to what is written in the Book of the Law of Moses—an altar of uncut stones, on which no iron tool had been used.


On it they offered To The LORD burnt offerings and sacrificed fellowship offerings. 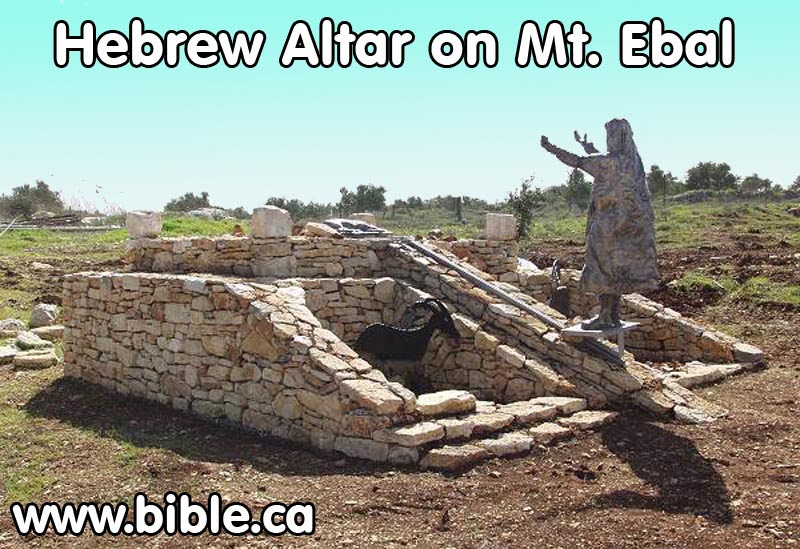 32There, in the presence of the Israelites, Joshua wrote on stones a copy of the Law of Moses. 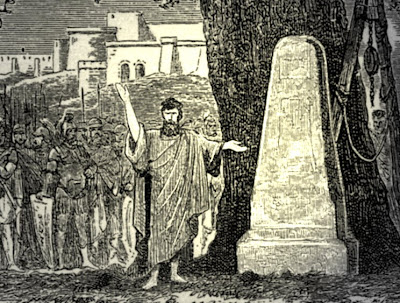 33All the Israelites, with their elders, officials and judges, were standing on both sides of the Ark of the Covenant of The LORD, facing the Levitical priests who carried it. Both the foreigners living among them and the native-born were there. Half of the people stood in front of Mount Gerizim and half of them in front of Mount Ebal, as Moses the servant of The LORD had formerly commanded when he gave instructions to bless the people of Israel.

34Afterward, Joshua read all the WORDS of the Law—the blessings and the curses—just as it is written in the Book of the Law. 35There was not a word of all that Moses had commanded that Joshua did not read to the whole assembly of Israel, including the women and children, and the foreigners who lived among them. 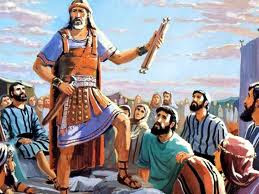 
The LORD Encourages Joshua, and Promises To Deliver Ai into his hands, and Instructs him how he is to proceed against it, Joshua 8:1,Joshua 8:2. Joshua takes thirty thousand of his best troops, and gives them instructions concerning his intention of taking Ai by trick, Joshua 8:3-8. The men dispose themselves according to these directions, Joshua 8:9-13. The king of Ai attacks the Israelites, who, feigning to be beaten, fly before him, in consequence of which all the troops of Ai issue out, and pursue the Israelites, Joshua 8:14-17. Joshua, at the Command of GOD, stretches out his spear towards Ai, and then five thousand men that he had placed in ambush in the valley rise up, enter the city, and set it on fire, Joshua 8:18, Joshua 8:19. Then Joshua and his men turned against the men of Ai, and, at the same time, those who had taken the city attacked them in the rear; thus the men of Ai were defeated, their king taken prisoner, the city sacked, and twelve thousand persons slain, Joshua 8:20-26. The Israelites take the spoils, and hang the king of Ai, Joshua 8:27-29. Joshua builds an altar To GOD on Mount Ebal, and writes on it a copy of the Law of Moses, Joshua 8:30-32. 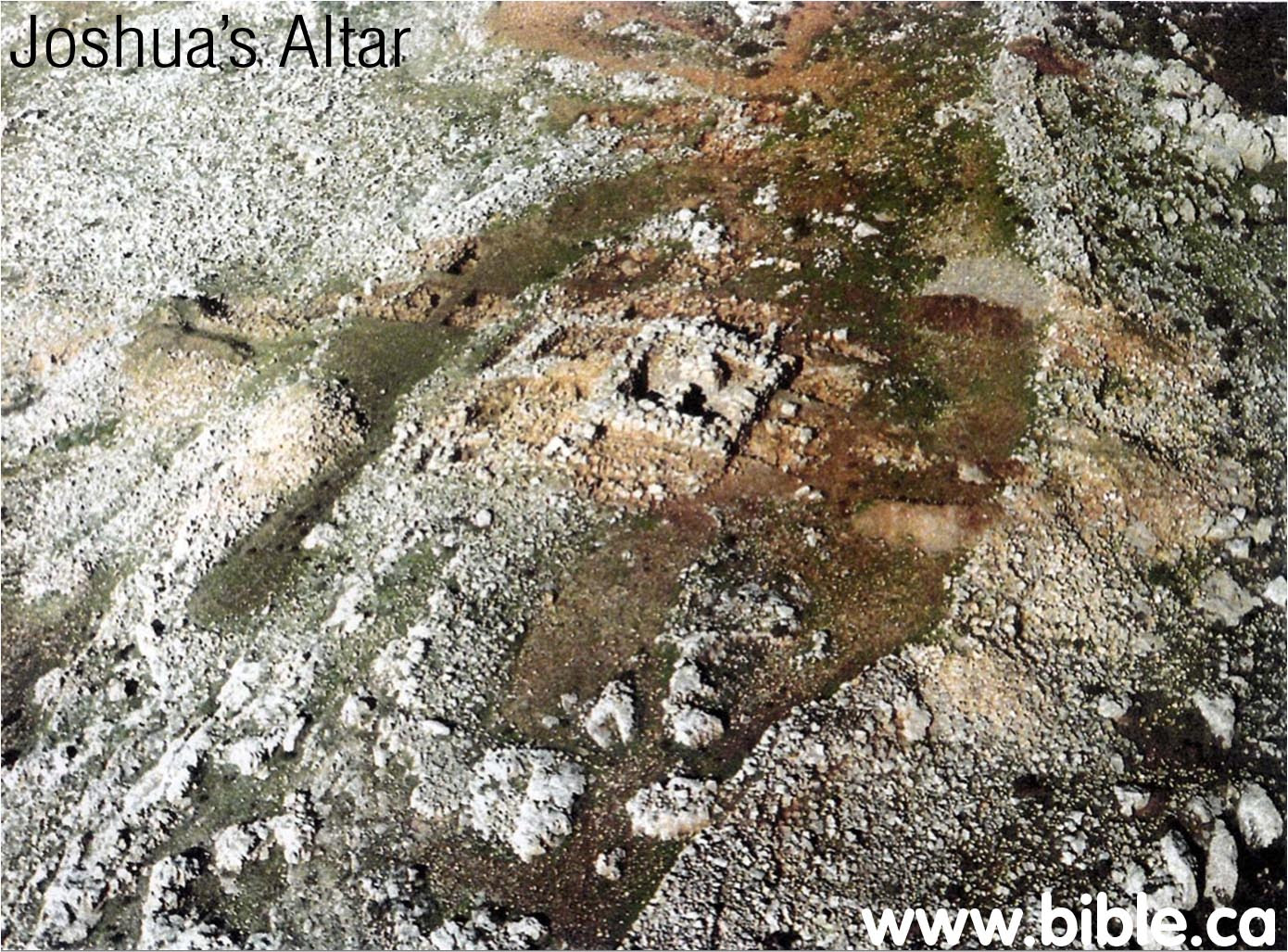 The elders, officers, and judges, stand on each side of the Ark, one half over against Mount Gerizim, and the other against Mount Ebal, and read all the blessings and curses of the law, according to the command of Moses, Joshua 8:33-35.