The Song Of Deborah

The Song of Deborah

1On that day Deborah and Barak son of Abinoam sang this song:

2“When the princes in Israel take the lead,
when the people willingly offer themselves—
Praise The LORD!
3“Hear this, you kings! Listen, you rulers!
I, even I, will sing To The LORD;
I will praise The LORD, The GOD of Israel, in song. 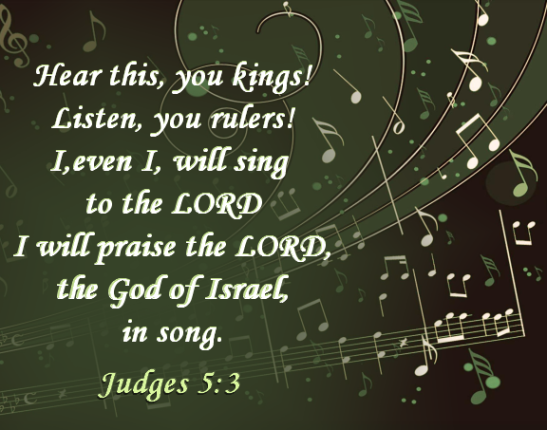 4“When YOU, LORD, Went Out from Seir,
When YOU Marched From the land of Edom,
the earth shook, the heavens poured,
the clouds poured down water.
5The mountains quaked Before The LORD, The ONE of Sinai,
Before The LORD, The GOD of Israel.
6“In the days of Shamgar son of Anath,
in the days of Jael, the highways were abandoned;
travelers took to winding paths.
7Villagers in Israel would not fight;
they held back until I, Deborah, arose,
until I arose, a mother in Israel.
8GOD Chose new leaders
when war came to the city gates,
but not a shield or spear was seen
among forty thousand in Israel.
9My heart is with Israel’s princes,
with the willing volunteers among the people.
Praise The LORD!
10“You who ride on white donkeys,
sitting on your saddle blankets,
and you who walk along the road,
consider 11the voice of the singersb at the watering places.
They recite the victories of The LORD,
the victories of His villagers in Israel.
“Then the people of The LORD
went down to the city gates.
12‘Wake up, wake up, Deborah!
Wake up, wake up, break out in song!
Arise, Barak!
Take captive your captives, son of Abinoam.’
13“The remnant of the nobles came down;
the people of The LORD came down to me against the mighty.
14Some came from Ephraim, whose roots were in Amalek;
Benjamin was with the people who followed you.
From Makir captains came down,
from Zebulun those who bear a commander’sc staff.
15The princes of Issachar were with Deborah;
yes, Issachar was with Barak,
sent under his command into the valley.
In the districts of Reuben
there was much searching of heart.
16Why did you stay among the sheep pensd
to hear the whistling for the flocks?
In the districts of Reuben
there was much searching of heart.
17Gilead stayed beyond the Jordan.
And Dan, why did he linger by the ships?
Asher remained on the coast
and stayed in his coves.
18The people of Zebulun risked their very lives;
so did Naphtali on the terraced fields.
19“Kings came, they fought,
the kings of Canaan fought.
At Taanach, by the waters of Megiddo,
they took no plunder of silver.
20From the heavens the stars fought,
from their courses they fought against Sisera.
21The river Kishon swept them away,
the age-old river, the river Kishon.
March on, my soul; be strong!
22Then thundered the horses’ hooves—
galloping, galloping go his mighty steeds.

23‘Curse Meroz,’ Said The ANGEL of The LORD.
‘Curse its people bitterly,
because they did not come to help The LORD,
to help The LORD against the mighty.’

24“Most blessed of women be Jael,
the wife of Heber the Kenite,
most blessed of tent-dwelling women.
25He asked for water, and she gave him milk;
in a bowl fit for nobles she brought him curdled milk.
26Her hand reached for the tent peg,
her right hand for the workman’s hammer.
She struck Sisera, she crushed his head,
she shattered and pierced his temple.
27At her feet he sank,
he fell; there he lay.
At her feet he sank, he fell;
where he sank, there he fell—dead.

28“Through the window peered Sisera’s mother;
behind the lattice she cried out,
‘Why is his chariot so long in coming?
Why is the clatter of his chariots delayed?’ 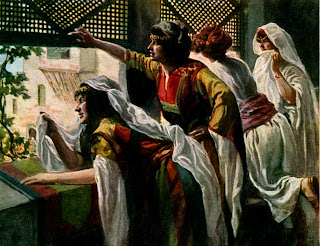 31 “So may all your enemies perish, LORD!
But may all who love YOU be like the sun
when it rises in its strength.”

Then the land had peace forty years.

Curse on ‘Meroz’ Pronounced By The ANGEL of JEHOVAH

Not Barak, but Deborah herself said this under a spirit of prophecy, not from her own spirit in a revengeful way, but from The SPIRIT of GOD; or this was suggested to her by An ANGEL, not a created, but the Uncreated ONE, The ANGEL of The Covenant, By Whom she was inspired, and an impulse made by him on her to denounce a curse on Meroz; which is some name of a city or place near where the battle was fought, and that Meroz here is the name of a place is clear from what follows:

Curse bitterly the inhabitants thereof; or "curse cursing"; repeat it, give them curse upon curse, curse them most vehemently: the reason of which is because they came not to the help of The LORD; that is, of the people of The LORD, whose cause was The LORD'S; for though HE Stood in no need of their help, yet their negligence and neutrality were highly resented by HIM, and therefore repeated: “to the Help of The LORD against the mighty”; the mighty Canaanites, and their mighty kings, and mighty hosts; Barak and his 10,000: now though others, who did not come into their assistance, being at a distance, yet those are cursed, being very near, and saw the peril their brethren were in, and yet would not lend an helping hand.


Meroz is condemned, and a curse pronounced upon the inhabitants of it because they came not to the Help of The LORD, v. 23. Probably this was some city that lay near the scene of action, and therefore the inhabitants had a fair opportunity of showing their obedience To GOD and their concern for Israel, and of doing a good service to the common cause; but they basely declined it, for fear of Jabin’s iron chariots. The LORD Needed Not their help; HE Made it to appear HE Could Do HIS Work without them; but no thanks to them: for they knew the attempt might have miscarried for want of their hand, and therefore they are cursed for not coming to the Help of The LORD, when it was in effect proclaimed,

Who is On The LORD'S side? The cause between GOD and the mighty (the principalities and powers of the kingdom of darkness) will not admit of neutrality. GOD Looks Upon those as against HIM that are not with HIM. This curse Is Pronounced by The ANGEL of The LORD, our LORD JESUS, The Captain of The LORD'S host (and those whom HE Curses are cursed indeed), and further than we have warrant and authority from HIM we may not curse. HE That Will richly Reward all HIS good soldiers Will certainly and severely Punish all cowards and deserters. This city of Meroz seems to have been at this time a considerable place, since something great was expected from it; but probably, after The ANGEL of The LORD Had Pronounced this curse upon it, it dwindled, and, like the fig-tree which CHRIST Cursed, Withered away, so that we never heard of it after this in Scripture.